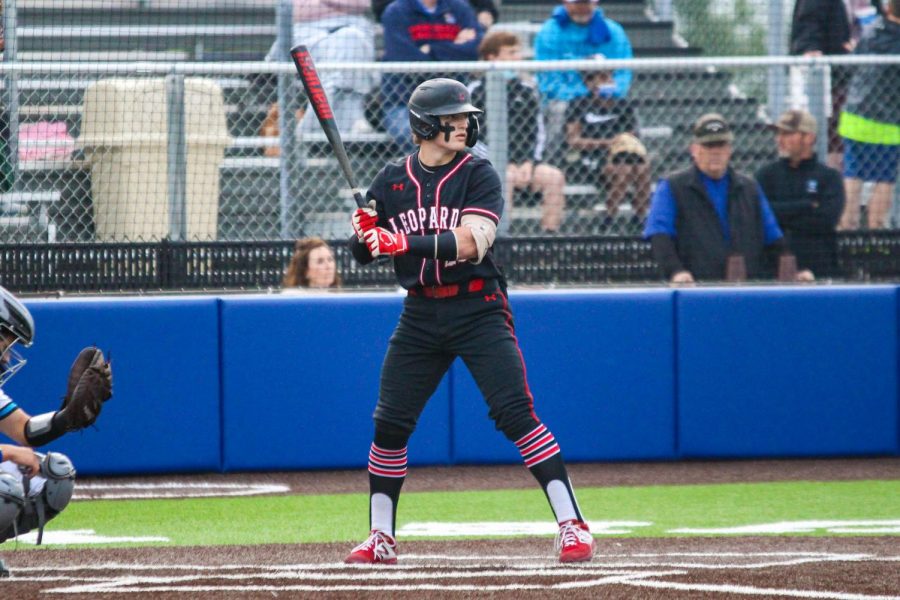 Freshman right fielder Matthew Mainord waits in the batter's box for a pitch from Rock Hill’s junior pitcher no. 1 Brett Foss. The Leopards beat the Blue Hawks 2-1 after eleven innings to claim second place in the district.

The varsity baseball team played in their last game before playoffs on Friday against Prosper Rock Hill, defeating them by a score of 2-1 in 11 innings.

“The Rock Hill game was awesome,” junior outfielder Kolby Branch said. “We held them to four hits all game, and we are starting to come together and get hot at the right time.”

“We feel really good, and we are playing really well as a team. We are playing some of our best games as of late,” Branch said.

Branch went 4-8 at bat with a double and two RBIs. Junior Trent Rucker hit the go ahead run to secure the win for the Leopards.

“Our batting game was really strong,” junior outfielder Trent Rucker said. “My favorite moment from the game was sealing the deal with the go ahead run in the 11th inning.”

The team is preparing for the playoffs by focusing on the mental aspect of the game, as well as the fundamentals.

“Our practices challenge us, and we’ve got a ton of guys working to be better outside of school,” freshman outfielder Matthew Mainord said. “We are trying to stay mentally prepared.”

The team’s first series in their playoff run will be against Frisco Reedy, who finished 13-5-1 in district play. The Leopards finished the season 11-3 in district, earning them the second seed going into the playoffs.

“My hopes are high,” Mainord said. “We have a lot of confidence going into the playoffs, and we have a really good shot at going far. If everyone works together, we can definitely do some damage.”

The team’s first playoff game will be on Thursday, May 6 at 7 p.m. Fans can attend in person or follow along at sportsgram.net.