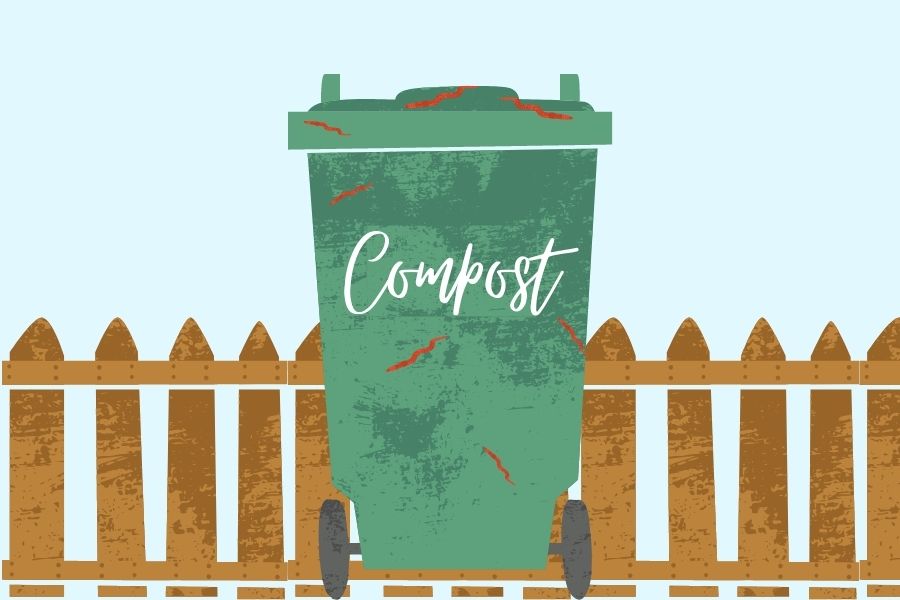 Middle school teacher and boys athletic coordinator, Jerry Quinton, composts from his backyard. He uses his compost to grow his own fruits and vegetables.

The average person goes to the grocery store to stock up on their veggies and fruit for the week. Produce, as such, can range between 32 cents a pound to $4 a pound. They come in all shapes in sizes, and typically are from an unknown farm. Many don’t choose the bruised fruit, but rather the ones that look perfectly untouched. For middle school teacher and boys athletic coordinator, Jerry Quinton, his grocery shopping experience includes plucking the fruit and vegetables off of the branch himself.

Jerry grows fruits and vegetables on his land from worm bins in Texas and Oklahoma. Quinton and his family use compost as fertilizer to aid in the growth of their crops by increasing the nutrient load in soil.

“It started as a project that one of my children wanted to do,” Jerry said. “I raised fish in a aqua container, so I wanted to start growing worms to feed our fish and chicken.”

Jerry has composted  for five years and shares his hobby with his wife and kids. Jerry plants vegetables such as peppers, tomatoes, cucumbers, beans, peas, squash and zucchini. Jerry and his family also take the garden straight into the kitchen and develop recipes.

“I like to make pickles [from] the cucumbers,” Jerry said. “I [also] make really good cucumber salsa, [which] sounds weird, [but] tastes really good.”

Despite regulating temperature, Jerry shares that composting is easy and encourages others to do it. Jerry and his wife explain that their family has benefitted from spending time in the garden.

“Starting our composting and gardening is just one way we have started a project we work on together and have fun doing,” Jerry’s wife Michele Quinton said.

Daughter of Michele and Jerry, Vivian participates in gardening. As a seventh-grader, she helps take care of the plants with her parents.

“I like picking what they produce and watering them,” Vivian said. “The worm ideas were my idea. I wanted to keep them as pets.”

The cost efficient act of composting and gardening is broken down simply:
Materials needed:

Combine shredded paper, soil and a little bit of water so everything is damp.
Add worms to the mixture, and let them sit there for a day. The mixtures must be very moist.
Drill holes in the top to allow worms to breathe.

“It has been interesting to say the least from building the bins that housed the worms to harvesting their castings and ‘worm juice’ as we call it to use as fertilizer,” Michele said. “Watermelon rinds seem to be the [worms’] favorite.”

Failure can come with gardening and composting.

“The year before last, It was beautiful outside,” Jerry said. “Toward the end of March, my fiance at the time told me not to plant these plants until after Easter. I planted a garden full of cucumbers and tomatoes, and three days before Easter, it froze and killed everything, so I had to start over. I don’t plant anything until Easter weekend now.”

Jerry and his family are still in the early stages of experimentation and should see a change in the crop yield as they start their second set of vegetables.