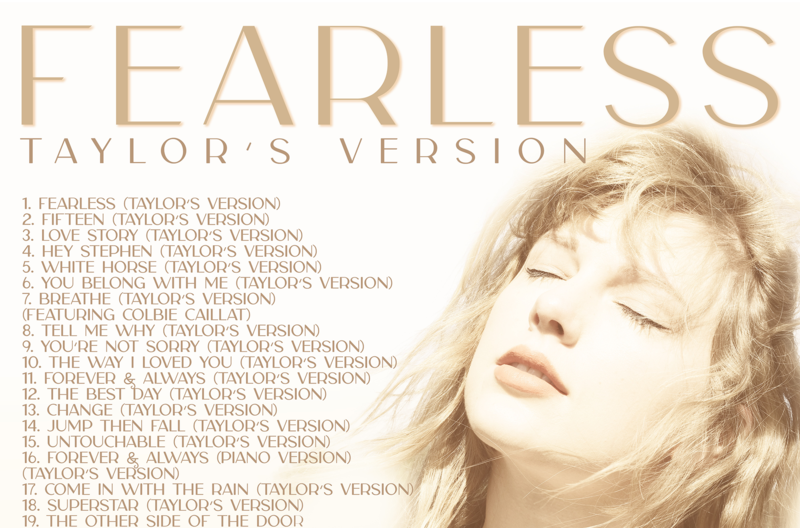 Taylor Swift released a reimagined version of her 2008 album "Fearless" on April 9. TRL's James Mapes said that Taylor's Swift vocals make a difference and the album doesn't include the "nostalgic feeling" of the previous album.

Taylor Swift released her soon to be diamond album “Fearless” in 2008, which consisted of songs such as “Fearless,” “Fifteen,” and “Breathe” feat. Colbie Caillat. Three years later, Swift rerecorded and reimagined the album as “Fearless (Taylor’s version)” on April 9 with 291,000 equivalent album units sold. There aren’t many differences between the two albums, but it brought Swift back to her country-style roots.

Swift recently transitioned to a more indie-pop centered style of music. This is quite different from her old genre style of country and pop. The indie-pop music from Swift won her a grammy for her album “folklore” in 2020, so, it’s easy to say the older album from Swift needed to be revamped to her new style.

First off on the album is the title track “Fearless,” which right off the bat, one will notice a subtle, yet major difference between the old version and the new one, the vocals. As of 2021, Swift is an all grown-up 31 year old woman, and there is bound to be a difference in the way she sounded when she was 18. Swift’s indie-pop tendencies definitely make an appearance on the track, with her pronouncing things differently and her tone. The song  still delivers the same emotion as the previous, and it is easy to say it is quite as good as the original.

Secondly on the revamped album is the song “Fifteen,” which was a hit when it was released. At the time, it didn’t matter if you had heard of the new upcoming artist, but you did hear this track on the radio. “Fifteen” is a song about her freshman year in high school, which might have hit home for some kids around that age at the time. However, with Swift’s age now, this was odd to me. Not to say that Swift’s new vocals aren’t stellar, but I don’t find that she has the same connection with the listener due to the difference in her age and tone.

Last but not least on the new “Fearless” album by Swift, is the song “Breathe” feat. Colbie Calliat. It is not every day that an artist goes back to re-record an album, but what happens when there is a featured artist on the song? Well, in this particular case Callait decided to come back and re-record with Swift on their track “Breathe.” The re-recording of Callait’s vocals is complementary to the new song because now we get to hear what they both sound like 13 years later. Combined with Swift and Callait’s new vocals, “Breathe” is a great song to listen to when reminiscing about someone or something.

Swift’s tone and age difference is noticeable in the re-recordings, so for some songs, they might not have the same nostalgic feeling they once did. This is because with age Swift has developed a more mature and adult sounding tone. On the other hand, the new “Fearless” album is definitely worth a listen if you find any interest in her music.