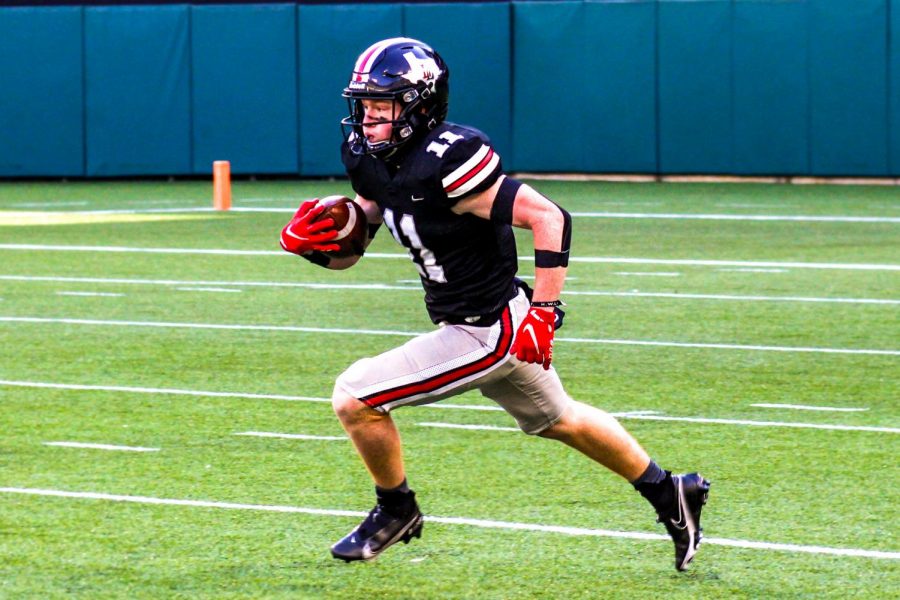 Senior defensive back no. 11 Chief Collins runs the ball at the third round playoff game. Collins will be attending Texas Tech in the fall to continue his football career.

Senior Chief Collins was selected by the National Football Foundation Gridiron Club of Dallas as a scholar athlete, and he made the all-state football team for this season.He also runs for varsity track.
Pre-Game:
Favorite Color: Blue

Chief Collins: When I was three, my brother, who was five, just started playing football. My dad thought it was a good idea for me to play on his team despite being two years younger than everyone else. Ever since then, I have loved playing football.

TRL: What was your reaction when you got the all-state selection, and the scholar athlete award from the Gridiron Club?

CC: It was really cool getting to see my name on it and being selected for that award. I was pretty excited.

TRL: What is your favorite part about football? Why?

CC: I love the part of being able to be a part of a team. Being able to go through hard times and fight with your team is something I love. I have made some of my best friendships and relationships because of being part of the team.

TRL: Are you planning on playing football or running track in college? If so, where?

CC: I plan on playing football at Texas Tech University.

TRL: Who has been your role model throughout your life?

CC: My dad has been my role model. He has pushed me hard to become who I am, but I try to be a reflection of who he is by the way he speaks and acts towards others.

TRL: What is your favorite memory from your high school football career?

TRL: What advice would you give to someone who wants to play high school or collegiate football in the future?

CC: Don’t get down on yourself. Confidence is gained from hard work. Just keep grinding, and don’t wish the time away.