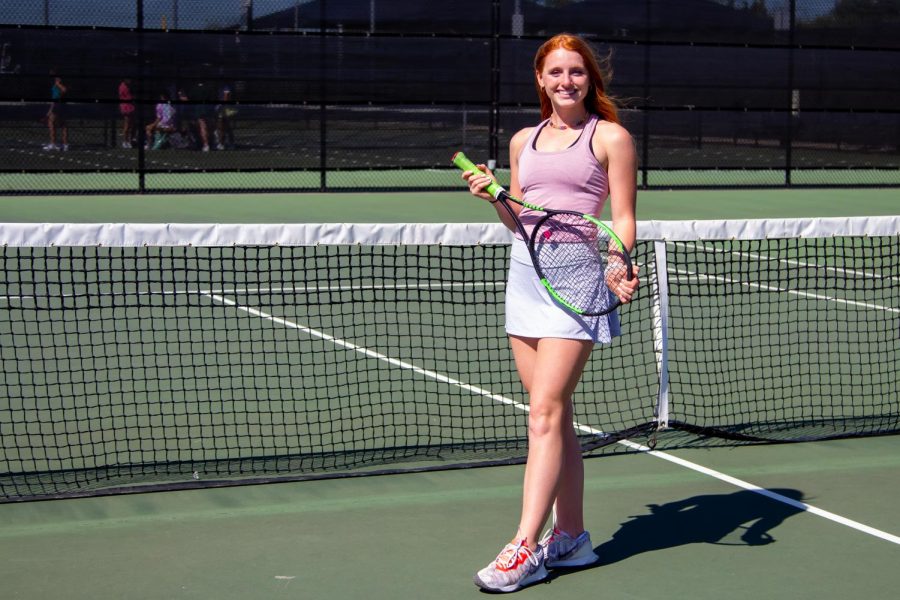 Senior Taryn Sutherlin plays tennis, as well as being in debate. Sutherlin started the Women in Business club this year.

Senior Taryn Sutherlin  is active with the tennis team, speech and debate, as well as the Women in Business club, which she founded. She accumulated multiple awards for debate and has become a varsity tennis player .
At A Glance:
Favorite Fast Food: Chipotle

Taryn Sutherlin: I have been playing tennis since third  grade, but I started playing competitively in eighth  grade.

TRL: How has tennis impacted your life?

TS: Through tennis, I have met some of my closest friends (shoutout to Abigail Le and Arushi Gupta). It has also taught me how to keep my composure in pressure situations, along with allowing me to learn how to be a better teammate. My physical skills have also improved greatly through practicing everyday.

TRL: Why did you decide to start the Women in Business club?

TS: Originally, I wanted to bring DECA [Distributive Education Clubs of America] to our school, which is an international business club. However, this idea got declined, so I pivoted and decided to start the Women in Business club. I thought it was a good idea because it helps us begin to think about our future careers in business and network with local businesswomen. Many colleges also have similar clubs, and I hope to join one where I attend.

TRL: How has starting the Women in Business club impacted you?

TS: Starting a club has been an amazing experience, and I’m so glad I have the opportunity to do this. I have been able to meet fantastic girls within our school, who I have gotten to know and connected with. Also, I have been able to network with local businesswomen, who have expanded my knowledge of the business world.

TRL: How long have you been debating?

TS: I started debating my freshman year, but if you asked my parents, they would probably say I’ve been debating my whole life.

TRL: What kinds of awards have you won through debate?

TS: I have earned probably about 25-30 trophies within local tournaments. Beyond locals, I qualified for the TFA state tournament, NSDA nationals, and the National Individual Events Tournament of the Champions. This year I also received the Academic All American reward from NSDA.

TRL: How has debate impacted your life?

TS: Honestly, debate has been one of the most influential activities I have ever been a part of. It has taught me crucial life skills,such as how to speak in front of crowds, how to research, and it really improved my confidence as a whole. Additionally, the people in debate have truly changed my life. I met some of my best friends through debate, some from our school and some from other schools. Overall, debate has been one of my favorite experiences of my whole life.

TRL: Is there an extracurricular you’ve done at Lovejoy that you intend to pursue in college?

TS: I plan to try out for club tennis in college. It is super competitive, though, so it may be hard for me to get on a team. I also will try to join a Women in Business club wherever I attend. Most likely, I will not join a debate team, but I will try to get on the TED Talk team, and join the Toastmasters club. Both of these clubs are very similar to my event in debate.