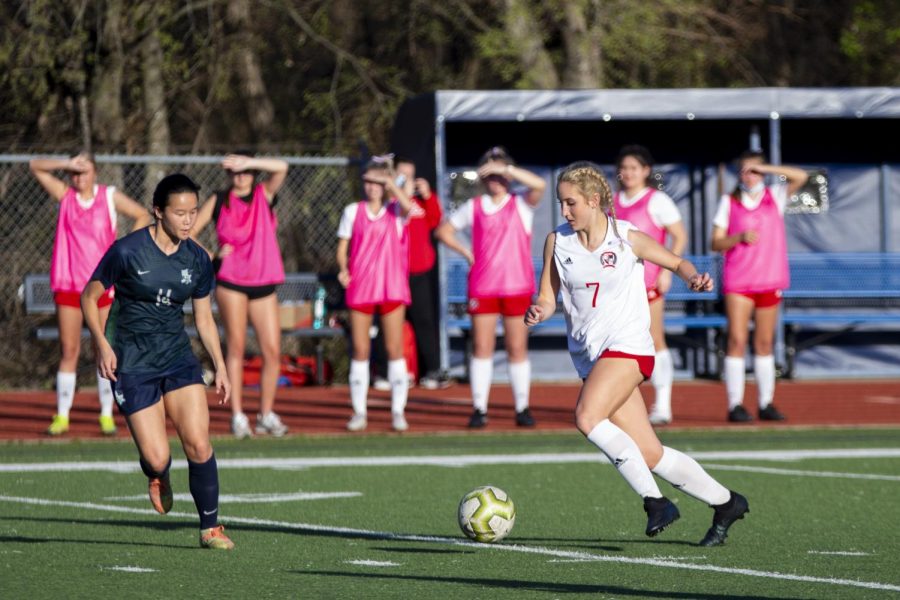 Junior outside wing no. 7 Tatum Chester dribbles the ball. The Leopards went 10-2-2 in their district season.

Freshman forward Taylor Person lines up the ball. Charging forward she kids the ball to the top middle of the goal right past the jumping goalie’s reach. “Goal,” the announcer shouts.

On Friday, the girl’s soccer season came to an end after a penalty kick loss to Frisco Reedy in the first round of playoffs at McKinney High School.

“We came into the game knowing it was going to be a tough game,” sophomore

midfielder Callan Snider said. “We knew we would have to work hard to keep it a tight game. I think we played very well, especially defensively. Reedy had very strong forwards and were very tough to defend.”

The score at the end of regulation time was 1-1, so the team went into overtime.

“We had played a great game so we felt confident [heading into penalty kicks],” Head Coach Ian Keeble said. “But, there is always that feeling that anything can happen in penalties and unfortunately we came out on the wrong end.”

The team finished off the season with a record of 10-2-2 in district play, which put them finishing second place in district standings. In the Bi-district game, they faced the Frisco Reedy Lions, who were third place in their district.

“The mindset was that we would play without fear, and that we would give everything, and we did just that,” Keeble said. “Unfortunately, it just wasn’t meant to be, but I am proud of the effort on the night, and what we accomplished throughout the season.”

According to assistant coach Saydee Bailey, the mindset stayed consistent game to game throughout the season.

“The mindset going into the Reedy game was the same mindset it was going into every game of the season, ‘out work the other team,’” Bailey said.

During the season, the girls beat the McKinney North Bulldogs for the first time in school history. The home game ended with a score of 2-1.

“This season I learned that you have to have everyone working together to have a strong team,” Snider said. “Not only that you all also have to put in the effort for a positive outcome.”