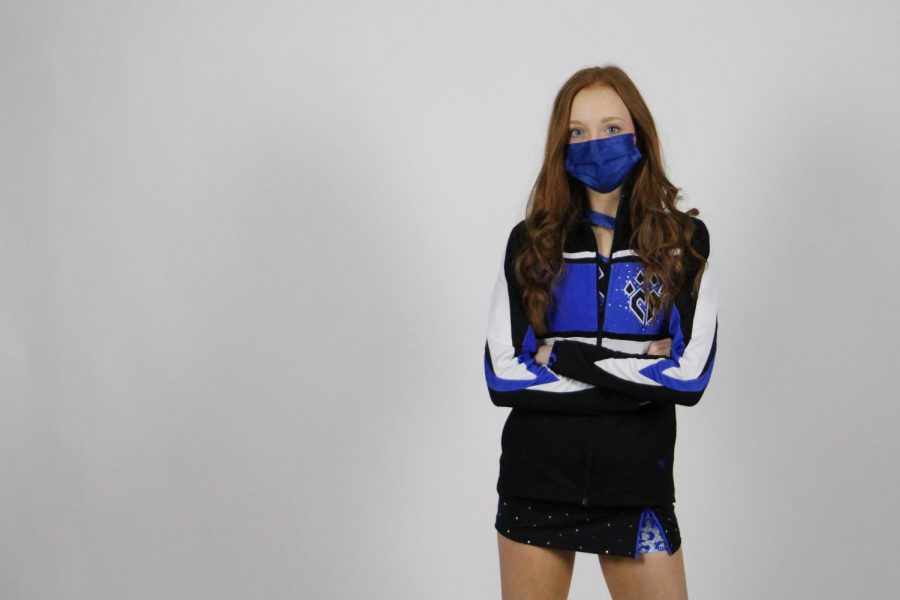 Junior Claire Traylor cheers on Swooshcats at Cheer Athletics. She has been on her current team for three years.

In the house of Minnie and Mickey Mouse, the crowd gathers again for the annual pyramids, stunts, jumps and tumbles of the cheerleaders. The crowd fills the room with prideful screams for the squads as they cheer. The blinding light shines down on the mat. Claire Traylor is suspended in the air, striking her arm up with what feels like the whole crowd’s eyes on her.

Traylor and her Swooshcats cheer team received their world bid on Jan. 31. The international competition takes place in Disney World in April.

“It’s really different,” Traylor said. “It’s crazy because there’s teams from France, Canada [and] teams from everywhere. The Worlds is at Disney World and the ESPN center, and so many people come just to watch you. You compete, and it’s so loud you can barely hear anyone talking all you hear is screaming and everything.”

“I knew everyone at the gym,” Traylor said. “I was there all the time from age 6 to 13. I knew everyone, and I still keep in touch with all of them. I think it made my friend group really a lot because of cheer Worlds. Everyone’s super close knit. It’s like one big family, so everyone always supports you no matter what. I think that’s really good.”

Traylor is a flyer on the Swooshcats.

“We keep our same routine the whole year,” Traylor said. “We upgrade it or make it harder for the harder competitions and worlds. Our routine consists of tumbling, jumps, stunting and pyramids. Our team is mainly focused on stunts, so we do a lot more stunts than we do tumbling.”

Traylor has been on the Swooshcats team for three years, and every year the team received a worlds bid.

“I think I’ve grown a lot,” Traylor said. “I’m on an international team, so that means that the ages are a lot different. You can basically be however old you want (the minimum is 13), but there’s no age gap. A lot of my team is a lot older. My first year, I was really young for my team, so it was intimidating growing up with older people. I feel like it made me mature really quickly. ”

“I heard about it, and I went and tried out,” Traylor said. “My first team I made was tigers, and it was level 14. Being at the gym, my small gym was maybe 100 people, but Cheer Athletics is 1000s of people. It’s crazy seeing how many people there were. There were so many coaches. It was really welcoming, too. It was a really different experience than what I was used to.”

Katelyn Lanman cheers with Traylor on the varsity school cheer team, and they go to the same competitive cheer gym.

“She is really good,” Lanman said. “She’s small, but she’s been on one of the top teams there for a while CA, and she’s a very good flyer. She knows how to help her bases out, and if she’s doing something wrong, she’s always asking for feedback to get better. If someone’s struggling or it doesn’t feel right underneath her, she’ll be sure to help you out and tell you, so it works better as a group.”

Last year, their season was canceled halfway through, so they couldn’t go to worlds. This year, Traylor’s team has participated in virtual competitions where they film their routine and send it to the judges.

“It’s really cool,” Traylor said. “It was really different. Since COVID-19 there are a lot of restrictions. You can’t have a lot of spectators coming and watching. Only a certain amount of people are allowed to come in and watch you. It’s really different than what [it] has been in the past because usually the past there’s like 1000s of people watching you. It’s super loud and everyone’s cheering for you. It’s crazy. It’s different, but a really fun experience.”

Traylor plans to cheer next year and into college. She hasn’t decided if she will cheer competitively or sideline in college.

“I tried out, and you wait one or two weeks.” Traylor said. “They’ll give you a phone call, and tell you what team you made. After I went and tried out my first time, they actually called me and asked me to come back again to try out for a world team. You had to be kind of invited to fly, so that was cool. They asked you to do different stunts and a lot of it I had never even done before. It was scary but it was fun.”

“She’s always got a smile on her face,” teacher Michelle McClelland said. “She’s the sweetest thing ever, and as for cheer, I love cheering her as a coach because she’s all of those things. She’s a team player, so [that’s] probably why she is going to the world competition.”

Traylor and the team practice every day for two and a half to three hours as they get ready for the competition.

“It’s not the sport itself, but the people and the environment you’re in,” Traylor said. “It’s different than anything else. You have a lot of people relying on you, and you have to rely on a lot of people and trust a lot of people since it is a team sport. If one thing goes wrong, it messes up the whole team, not just that one person. It has a lot of trust in it, which I think makes everyone close. The bond between your team is special.”