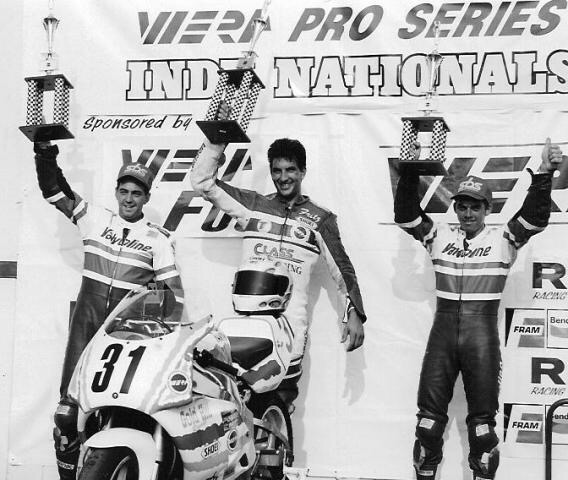 Michael Martin, first from the left, poses for a photo in a Nationals race in Indianapolis. Martin scored second place in this race.

In the Texas World Speedway track, an eight hour endurance race in foggy weather created “Miracle Man Michael Martin.” The Valvoline Suzuki team was shooting for their 100th win when the bike crashed. After the mechanics fixed the bike in the pits, Michael Martin started out four laps behind. He lapped everyone all the way to winning the race. The team sliced into a checkered cake, celebrating their win.

Michael Martin teaches as the chief instructor at Suzuki’s Advanced Riding School. He won seven National Championships in his road racing career and in 2014 was inducted into the CMRA (Central Motorcycle Roadracing Association) Hall of Fame.

“I love that my dad rides motorcycles,” daughter and junior Molly Martin said. “He loves it, and so does the rest of my family. My grandpa, uncles and cousins are all gear heads and love anything with wheels and a motor.”

Michael rode bicycles during training to stay in shape. He also raced bicycles in Dallas, Austin and Fort Worth.

“It was very important to stay in good shape,” Michael said. “I exercised and worked out a lot and kept myself in good physical condition by eating right and taking care of myself. There were always different circumstances with each event, and some days, it would be raining so you had to ride a little bit differently because of the rain. But mentally, you had to be tough. Everybody wanted to beat you, and you wanted to finish as best as you could. So, you just had to get yourself in the game right before the race started.”

“It was one of the bigger teams that was racing that series, so there was a lot of pressure,” Michael said. “Racing is an expensive sport, and when you’re sponsored, you know there’s a lot of pressure on you to produce and to do good in this stuff. But, it was great. With riding on a big factory supported team, there’s pressure that comes along with it, but then there’s also a lot of satisfaction. Being on one of the top teams, you’re a little bit of a celebrity kind of thing. So it has its good and bads, but mainly good.”

Kyle Martin, Michael’s nephew, grew up looking up to Michael as he raced karts and motorcycles. Michael and Kyle go to the track together with Kyle’s son.

Michael raced go karts with his brother, which led him to France, where he raced cars for two years in the French Formula Renault. When he got back from France, his friend let him ride his road racing motorcycle, and three weeks later, Michael was road racing.

“I was the main one in the family,” Michael said. “I was the youngest of three boys. We were all, kind of, I call us gearheads, where my older brother was a car guy, and my middle brother was one of my race mechanics. When I was a kid, I would take my brother’s motorcycles out [to] ride them and that kind of stuff. That’s really what got me going on it. It was just something that I fell in love with in [my] early stages in life and pursued it and kept working and working to ride different bikes, and you’ll learn about it all. But I was the main, main racer in my family.”

Michael taught in France, Germany, Greece and Spain during the summer.

“I teach people how to be better, more effective and safer motorcyclists,” Michael said. “I teach a riding school. We teach people that barely know how to ride that are very, very much amateur, and we teach those people up to professional racers. We teach the whole gamut of riders and riders’ abilities. Our main focus is to try to help people become more efficient, better motorcycle riders.”

Throughout Michael’s 50 years of racing, he broke his wrist and his collarbone in accidents.

“The good thing about teaching is that you don’t have to put your life on the line,” Michael said. “It’s safer, and I truly enjoy teaching people and sharing my knowledge of the sport with other people. If guys like me don’t go back and help younger riders, then everybody starts at a lower level all the time. With just a little bit of my knowledge, I can pass it on and have people really enjoying themselves, and enjoying riding motorcycles better.”

Michael and his family celebrated his induction to the CMRA Hall of Fame with a dinner and presentation where Michael was recognized in front of hundreds of people.

Over the years, Michael has collected 20 motorcycles of various types.

“I collect them,” Michael said. “Actually, what I do, is I just never sell them. I buy them, and over the years, I’ve collected them and never sold the ones that I’ve owned. They just keep growing and growing and growing and that kind of stuff. I have some bikes that are as old as 1967 model bikes, some very old, and then I have 2020 models. I’ve got the whole gamut of dirt bikes and street bikes, and I’ve got too many is what I’ve got. It takes a lot of time to take care of.”

Michael rode dirt bikes in Motocross from the age of 12 into his 20s before starting his road racing career. In 1997, Michael, his two older brothers, and dad started the M4 Performance Exhaust that Kyle, and his dad now own and operate.

“I had odd jobs and stuff going up through junior high into high school,” Michael said. “Then, [I] just worked and kept doing things until I could afford to buy motorcycles.Then, once I got good enough to get sponsored, I started making a living by racing. So, it just took a few years to get going until I was good enough to make [money, or] until I started making money doing it.”

“My racing career taught me many lessons about life,” Michael said. “I had to be good enough to win races and championships, yet not crash and get injured. But, most importantly, I learned that chasing your dream and doing what you love is your greatest gift.”