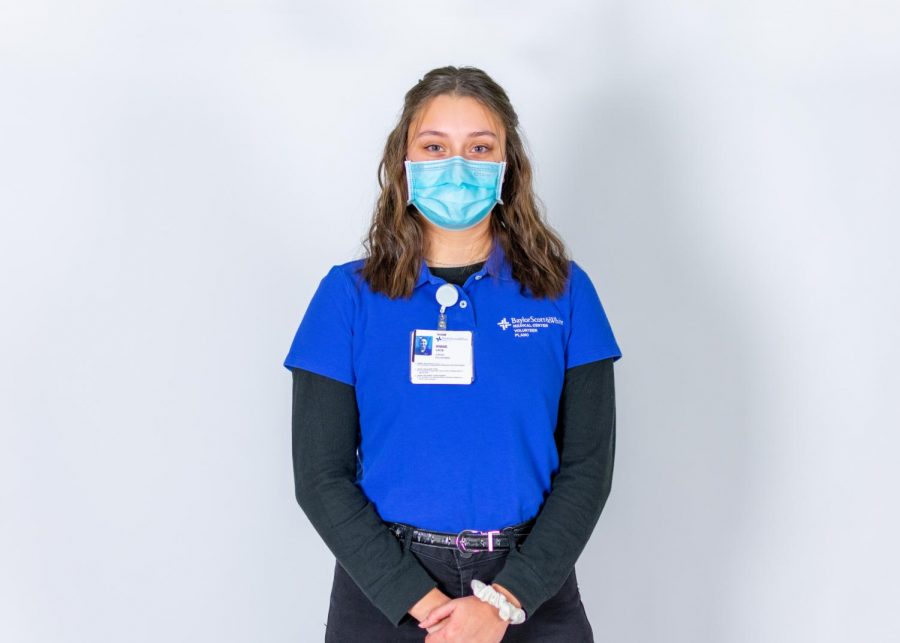 On April 30, 2017, a brown-haired girl walks into white jackets, scrubs galore and speedy paces. The itch of productivity called as her eyes followed the scene before her. She spoke with doctors and completed tasks, feeling like an adult. Annie Laos found her second home, the hospital.

“My parents have always said ‘doctors a good choice,’” Laos said. “I just had to decide for myself, which [being a doctor] was a good one [career choice] when I stepped into a hospital, especially volunteering. It’s been an eye opener that I could be very comfortable in this place. I love working with older people. I don’t know why I love working with a lot of people trying to reach a good goal. I feel safe, and I felt at home. At first I was a little intimidated in a hospital, but then they were very serious. There wasn’t any drama or anything. It was just straight to the point, and it wasn’t a judging community either. I just felt that this was something that I can do, I see myself doing, and I could be comfortable and happy with it.”

Laos wants to study pre medicine and specialize in cardiology.

“I definitely want to go in with hearts since my family has a long line of heart problems,” Laos said. “I feel I could be someone that could help you guys with that.”

In her first year, Laos walked in a week early, but  Robin Jacks, the guest services and coordinator for concierge services at Baylor Regional Medical Center at Plano, took her under her wing.

“She took me around personally and showed me how to do everything for the first week by myself and things like filling coffee machines up on all the levels,” Laos said. “Doing rounds with patients, you have a cart with some, like a cart with a lot of things people in a hospital would need while they’re there like hygiene products, entertainment. You’re just there to be a person for them if they want to talk to you. It was really a part of guest services and making sure that they were happy in their little room they had there, making sure everything was good for them. If there was [something they needed], then I would be the person that would help them.”

The application process included written essays, references, a background check, drug test, Tuberculosis shot and an interview. Laos normally volunteers in the summer and signs up throughout the school year. She wasn’t able to volunteer in summer 2020, but she could communicate with the hospital via zoom calls during school to help from afar.

“We had 200 kids show up during my session, and they split us off into three rooms,” Laos said. “We were all in a little conference room. There were three people there. One of them was Robin, and they would each ask us a specific question. They didn’t want what are your grades, do you have straight A’s. They just wanted to know that we cared about people, and that if we were in a room with an adult, we would be respectful. So, I tried to. I got the clue what they’re asking, so I tried to answer appropriately.”

Laos wants to complete her undergraduate at University of Texas at Dallas (UTD), and then go to medical school at UT Southwestern.

“She let me lead the kids that showed up at the right time, so she didn’t have to do it,” Laos said. “She just let me go for it, and by the second week, I was there. She moved me up to the second floor which was the surgery office, and I got to be the receptionist at the surgery desk, where I would be able to check in patients coming in for surgery, and then I meet with the family members, if there’s any there. It was really cool, and I really wanted to impress them that I was a responsible person. By, say my fourth or fifth week, I was working with a registered nurse, checking vitals and getting them prepped for surgery in the room. I was no longer the receptionist now. I was in the room with them before they had surgery.”

“HOSA is an international student’s organization that promotes career opportunities in the healthcare industry,” HOSA advisor and teacher Kathryn Barnett said. “HOSA gives students the opportunity to develop skills and qualities that help them to be successful in high school and in their future careers. HOSA encourages personal well-being and service to others. Lovejoy HOSA supports the Alzheimer’s Walk and Wear Red Day in February to support the American Heart Association.”

Debbi Muckleroy is Laos’s medical terminology teacher this year as well as a HOSA advisor.

“It provides many opportunities,” Muckleroy said. “First, it allows her to explore different options. She will see different careers in her volunteer capacity, whether it be if she sees a doctor interact with a patient, or a nurse interact with a patient, or the phlebotomist who comes in to draw blood from the patient. She gets to see the whole paining process to a certain extent. The other thing is, depending on how much she is working with patients, it gives her the ability to develop those skills communicating with patients, maybe those included who don’t hear well, or don’t see well, or have disabilities that prevent them from moving well. Those experiences will shape who she will be later as a medical professional because she will be able to rely on some of the things she saw early on to give not only an empathy with her patients but an understanding of where they’re at.”

With COVID-19 changes, Laos hasn’t been able to volunteer throughout the school year as much as she planned.

“I think Annie’s volunteer experience will make her excellent in healthcare, and I think she’s got the skills and ability, both from an education standpoint, a willingness to develop professionally, as well as a willingness to grow,” Muckleroy said. “I mean because let’s face it this takes a lot of time out of her day to go and get to the volunteer place and do that. She is taking the steps to be able to do well in her future career.”