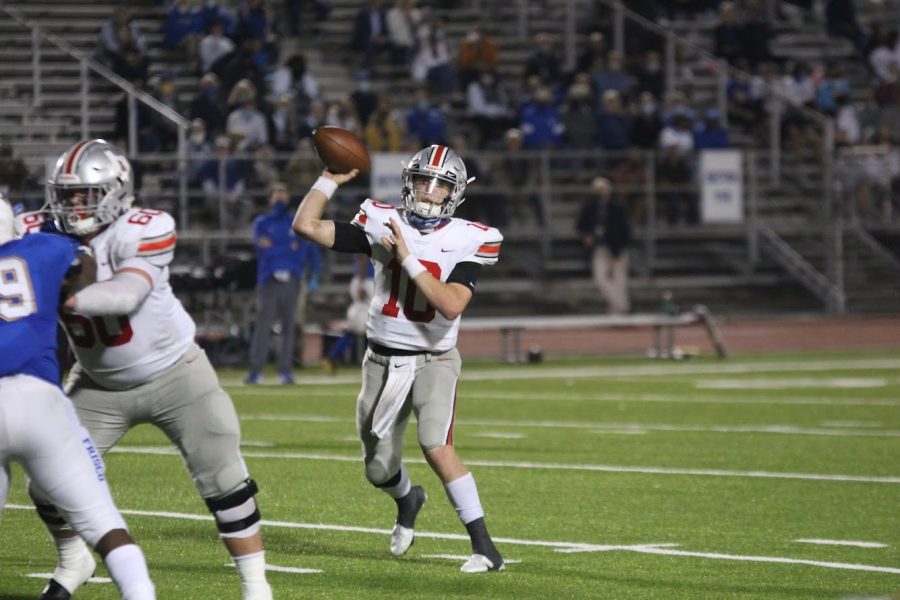 Senior quarterback no. 10 Ralph Rucker passes the ball to senior Reid Westervelt. Rucker was nominated for the Landry Award based off of his playing and leadership from this season.

Senior Ralph Rucker is a finalist for this year’s Landry Award. This award recognizes the top high school football player in North Texas who demonstrates positive character and leadership attributes.

“I am honored and humbled to be acknowledged for such a prestigious award and to be in the company of the past recipients such as Kyler Murray and Myles Garret,” Rucker said.

The nominees are chosen by a voting panel of former coaches and players, members of the media and local leaders.

“[This] has already impacted my career by publicizing my name, and the Lovejoy football program,” Rucker said. “Winning the award would bring more respect and attention to the Lovejoy nation.”

In the season leading up to his nomination for this award, Ralph worked alongside his team and led them in his role as quarterback.

“What everybody witnessed on Friday nights was the result of impeccable, passionate and relentless effort to perform at a high level for a team,” assistant head coach Jayson Lavender said. “If he could bring every single team member up to that award stand, or whatever it is that they have, he would, and that’s what makes him really good. He brings out the best in other people.”

The winner of the Landry award will be announced in a special presentation aired on CBS 11 News on Jan. 30 at 11 p.m.

“I’m super proud of my brother,” Ralph’s brother Trent Rucker said. “He is one of those guys that wakes up in the morning and wants to start looking at film and preparing for the next opponent. We are on different sides of the ball with me being a safety and him being a quarterback, but he helps me think in the way that a quarterback would, so that I can perform the best I possibly can, and the team as a whole can perform at a level he knows we are capable of.”