Former alumnus and new friend made a podcast 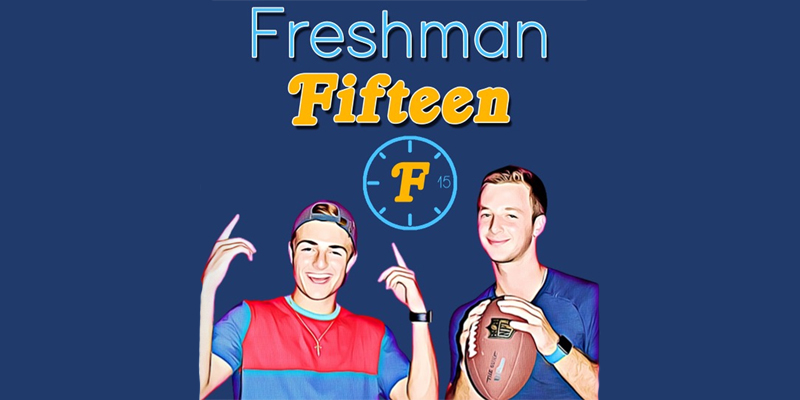 Benjamin Nopper and Collin Bass pose for their Freshman Fifteen's logo found on Spotify. Nopper and Bass uploaded their first episode on Jan. 11.

The smell of scrambled eggs, buttermilk pancakes, sausage and oatmeal. Benjamin Nopper sits eating cereal for the first time on campus. Normally, he would skip this meal, but today he didn’t. Nopper starts to leave but meets Collin Bass, and they hit it off. As their friendship begins to blossom, they talk about creating a podcast. Instead of gaining the freshman 15 pounds, Bass and Nopper are giving 15 minutes to the world.

Nopper and Bass created the podcast, “Freshman Fifteen” and uploaded their first episode on Jan. 11.

“Ben mentioned wanting to start another podcast in college during the summer before he even met Collin,” friend Olivia Porsch said. “I remember helping him brainstorm ideas for it, and the term freshman 15 came to mind because it’s catchy and something people are familiar with, but I thought it would be fun to do short 15 minute episodes to go along with it. Ben texted me during the fall after he met Collin and asked if they could use that name. I thought it was so funny that they actually wanted to use it.”

Bass and Nopper go to Baylor University in Waco, Texas.

“We were just two guys who love Jesus, love disc golf and like to record out voices,” Bass said.

Nopper started the Jungle Java podcast with alumnus Matt Piccirillo as their senior projects. This is Bass’s first time making a podcast, and he runs a Christian Instagram account where he posts devotionals.

“You learn a lot about yourself, but to me, the most exciting thing is meeting people or Collin meeting other people,” Nopper said. “Going into college after high school, you have a clean slate, but you still have all the things you learned about from high school and the people. I still keep in touch with a lot of people from there, too because you’re making new friends, but that doesn’t mean the old ones have to go. We’ve been really blessed with our college experiences so far, but we know that there’s other people out there who might struggle or be finding harder times. We want to be a positive presence.”

“Today [Jan. 17] we’ll probably record this afternoon,” Bass said. “That one time we’re like, ‘let’s just go. Come on’ because we’ve talked about it for so long. We’re like, ‘we’re both right here. We got a mic in front of us. Let’s just record it.’ We’re not going to do it that late all the time, but to start it off it was a good way to get started.”

Bass and Nopper use the platform Arc to publish the podcast.

“You can see the analytics,” Nopper said. “We were looking at the majority of them coming from Waco, but we had a lot from Allen, our hometowns, Cypress, though there are a few from Virginia. I think there were a few from California, some in Florida. Just seeing those analytics is encouraging. Who’s to say it’s not some robot out there, but we’re reaching people.That’s a very exciting thing.”

Episodes can be found on Spotify and Apple.

“I think it’s kind of cool, but it’s kind of scary too,” Bass said. “It’s public. Anybody could just go out there and listen to it, so whenever we’re recording, I gotta be a little careful about what we say and just kind of be cautious. It is a little bit of a risk, but I do think it’s super cool that anywhere in the world somebody could get up and listen to us.”

Even if the name changes, the idea of finding joy, peace, and maybe spilling some drama remains.

“I think even if we’re not freshmen anymore, it’ll still kind of relate to college, but I don’t know maybe we’ll call it Benj and Bass or something that’s our artist name,” Nopper said. “Maybe we’ll change it. We’ll see. We’re working on maybe some merchandise, so once we make that, we might never want to change [the name].”

Nopper and Bass plan on having people from other campuses, administration, friends, or people who are involved with college life on the show to “spread this movement.”

“A person I really look up to would be Bob Goff,” Bass said. “I love his casual aspect of life and how he approaches the relationship with Jesus as a thing everyone should have. It’s not like he’s better than anybody. He just lives life with Jesus, shares a smile and invites you to come with him. That’s something I look up to because he lives a crazy life, but he dumbs it down to a level everyone can relate to. That’s my goal- to live a life that walks with Jesus that others can look at and is like ‘hey, I want to walk with Jesus, too.’”

It’s not just college students that listen to their podcast, but people in their 30-50’s as well.

“For the most part [Bass and Noppers friends are] really, really supportive,” Nopper said. “A lot of people are interested in it, which is nice, too because if you think about it, it’s just us talking and for people to actually care about that it goes a long way. I know it makes us feel really good.”

Porsch has known Nopper since kindergarten through Hart Elementary and to the same friend group in high school. She met Bass on FaceTime, and then again at a StuMo conference (Student Mobilization).

“Ben and Collin are like twin flames,” Porsch said. “It’s so special to see your high school friends go off and find new friends that fit them so well. Collin is such a good friend to Benji, and it makes me so excited to see them find their people at Baylor. They’re super honest with each other, and they encourage each other in their faiths, which is a really incredible thing to see because I know a lot of young people who don’t feel comfortable talking about that kind of stuff.”

Nopper and Bass uploaded their third episode on Jan. 24, including their first guest, Aly Jasso, who won their Instagram giveaway.

“I think the podcast is important because it’s super relatable,” Porsch said. “We are going through the same season in our lives in terms of trying to find our own way in a new environment in college, so it’s encouraging to hear other people talk about the same things you’re going through.”