Football attends fourth round of playoffs 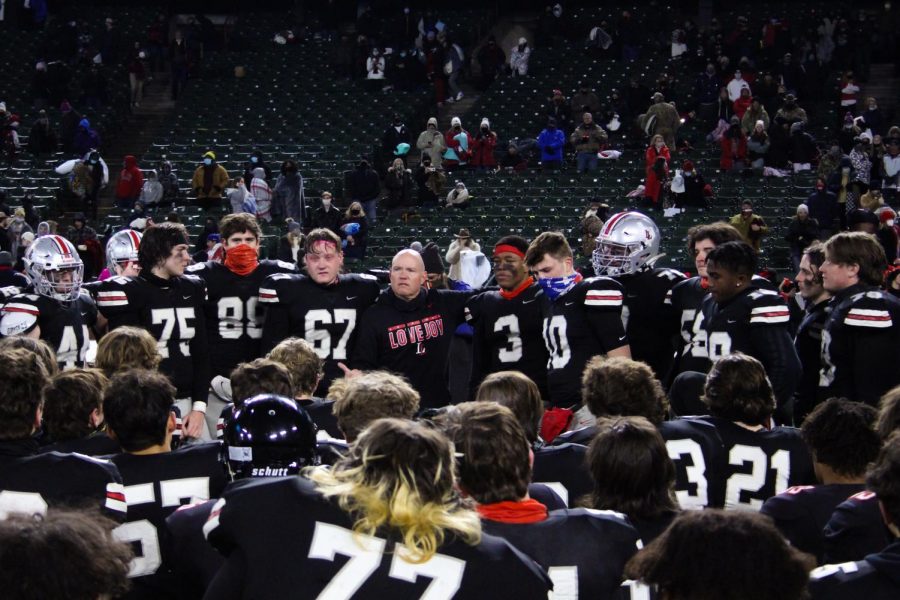 Head Coach Chris Ross called up the seniors in the post game talk to commend them on their season. Aledo came back to win the quarterfinals game and knock the Leopards out of the playoffs after scoring 24 points in the fourth quarter.

With the ball on the two yard line, and a change in formation, senior quarterback Ralph Rucker throws a touchdown pass to his wide open brother Trent Rucker. The touchdown put the team up by 10 at the start of halftime against Aledo.

For the first time since 2009, and the second time in school history, the football team fought their way into the fourth round of playoffs. The team faced Greenville, Everman, Timberview and Aledo in their campaign.

“[The team] learned that it’s not about individual efforts,” senior linebacker Shawn Roberston said. “It’s about the team. Teams win championships not individuals, and I think the world saw that through how [the team] played in the playoffs.”

On Friday, Dec. 18, the team beat the Everman Bulldogs in the area championship 49-21. The Leopard defense held the Bulldogs to 40 passing yards, and junior linebacker Philip Joest and senior linebacker Blake Slaughter combined for 43 tackles in the game.

“The Everman game was a great start,” assistant football coach Jake Mayfield said. “[In the] second round, we took care of business against Greenville. Everman was challenging, and they had a very good player that we had to shut down, and that’s what we did. It was cool to play at Globe Life Park, and the atmosphere that comes with it. It was an awesome stage for the Timberview game, and the Aledo game.”

On Christmas Eve, the team played in the regional championship against the Mansfield Timberview Wolves. In a come from behind win, the Leopards outscored the Timberwolves 64-50. Senior quarterback Ralph Rucker ran for one touchdown, and threw for eight. Six of these touchdowns were to senior receiver Reid Westervelt.

“The Timberview game really showed how we can overcome adversity,” Robertson said. “We were down early in the game, but we stayed together and fought together to get the [win]. Our coaches did a great job of putting in a great game plan to combat [Timberview’s offensive line’s] size. I feel like we executed the game plan throughout the game and created one-on-one matchups that we could win.”

The quarterfinals game was originally scheduled for New Year’s Eve, but it was rescheduled to New Years Day because of potential bad weather. The Leopards kicked off against Aledo at 7:30 p.m. at Globe Life Park for the third straight week. The team was up 31-21 at halftime, but was not able to hold onto the lead, falling to the Bearcats 52-48.

“The Aledo game was crazy,” Joest said. “We fought till the end, [but] everything doesn’t always go your way. You have to live and learn from the mistakes. [In playoffs], you just learn what it takes to go all the way and how we need to prepare. [Playoffs] teaches you [to play] through adversity or when stuff is even going your way, to keep fighting for your brother next to you.”

Aledo was ranked No.2 in 5A Division II by MaxPreps going into the game, and the Leopards ranked No.3. Aledo is tied for first for the most State Championships in Texas at nine.

“Going into this game, the kids were thinking that they couldn’t beat this team,” Mayfield said. “However, we fought and the kids really believed that we could win that game, but we came up four points short. It just shows that even when you play hard, there is no guarantee that you are going to win. I think the players gave it everything they had. It shows that if we continue to build and raise the standard, we will be able to win. We are super excited about next year, and we are continuing to build and get stronger.”

Team captain Joest has two words when it comes to his mindset for the next football season.