Sophomore keeps bees in his backyard 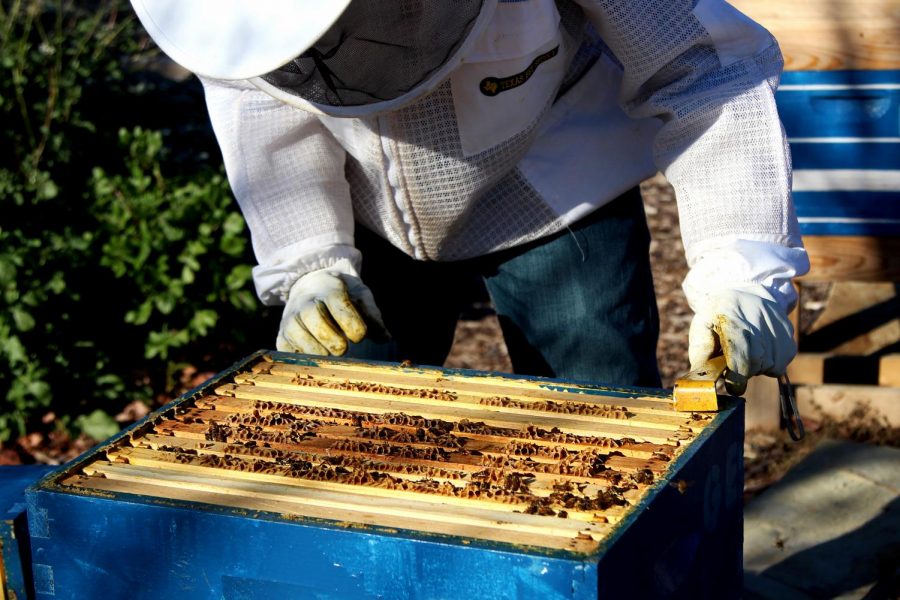 Sophomore Gabriel Ezell tends to his beehive. Ezell has been beekeeping with his mom and the two each have a hive.

The conditions have to be perfect: above 55 degrees, not windy and not cloudy. He puts on his bee suit, a pair of gloves and two smokers. Sophomore Gabriel Ezell opens up his beehive.  He puffs the smoke and looks into his hive. For over a year, Gabriel worked with this hive and harvested his honey in July. His next plan is to sell it.

“It’s a lot of fun,” Gabriel said. “It’s really nice being able to have your bees and being able to say ‘I can take care of my bees. This is what they like to do. This is the pollen they like,’ and it’s interesting in a lot of ways. There is so much stuff to know about beekeeping. It’s an incredible amount of information, and it’s fun to learn it all.”

“When he told me he wanted to get into beekeeping, I thought it was too big of a project for him to do by himself,” Gabriel’s mom Kim Ezell said. “I told him he needed to find some resources, and I knew that there was a Collin County Hobby Beekeepers Association (CCHBA) in the area. When we went to the State Fair a year ago, the guy who was running the Texas beekeepers booth told us about the scholarship. Then he applied.”

The application process required Gabriel to attend monthly meetings, give a presentation and write three articles for the CCHBA’s newsletter. He also attends classes on beekeeping.

“We have about five classes, one every month for the first part of the year.” said Shannon LaGrave, Gabriel’s mentor and CCHBA member. “They’re a lot of fun and about half the day. Most of the time, we meet up at a honey house in Josephine, Texas. Weather permitting, children are told to go into the bee yard and catch drones, or identify the queen, or look inside the hive and see what’s going.”

The scholarship program has a focus on family, and students are encouraged to have a family member participate in beekeeping with them. Kim decided to participate with Gabriel and she has a beehive too.

“It’s fun to watch the bees,” Kim said. “They’re interesting. They’re far more gentle than I thought they’d be. They’re slightly annoying when they hang out and buzz around you like when you’re on the patio and they land on your phone when you’re trying to have a conversation, but they’re not aggressive or mean or anything.”

After about a year, Gabriel received his hive. The scholarship provided him with a hive that he built from a kit, some beekeeping gear and bees. However, Gabriel and his mother faced challenges along the way.

“During the summer, both hives decided that democracy was the right way to go, and they killed three queens each,” Gabriel said. “We had to keep requeening and requeening because without a queen, there are no eggs. Without the eggs, the beehive just starts to collapse.

Gabriel and Kim had to requeen around three times per hive. This went on for a month until late July.

“We kind of saw the general pattern where we saw a few eggs and then nothing,” Gabriel said. “We were about to requeen again, and each queen costs like 25 bucks, so it’s kind of a big decision, and one of our mentors said ‘actually, it’s not the queen this time. The nectar in the pollen has dried up, so the queen just isn’t laying because there’s not enough food.’ At that point, we were still kind of skeptical and still very, very worried but somewhat relieved.”

Gabriel has since extracted the honey from his hive and is continuing to take care of his bees.

“I’m planning on [selling honey],” Gabriel said. “I didn’t get this much this year since it was the hive’s first year. Between both hives, we got 24.5 lbs of honey,which is not great but decent for a hive’s first year. If I had more, I would definitely sell it. I have a list of people waiting to buy.”