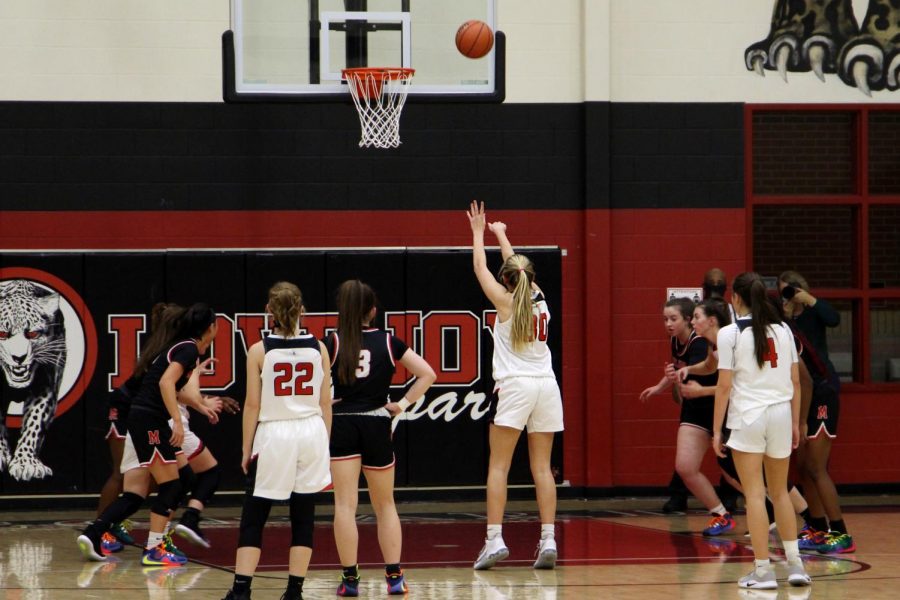 Sophomore Linnea Maddox shoots a free throw. The shot was attempted in the first half.

The girls basketball team played against the Melissa High School Cardinals on Tuesday. The Leopards lost with a final score of 57-20.

“We just need to focus and push ourselves and each other during practice,” freshman forward Samantha Daniels said. “In the game, we’re going to have to execute plays and be strong with the ball.”

The Cardinals, as a team, combined scored ten three pointers in the game.

“Melissa challenged our team by being fast, physical and shooting well,” junior guard Sydney Chapman said. “They had multiple players on their team that shot threes really well, and they were able to score a lot of points off of those shots because we were late to rotate and close out. We just need to learn to play our game despite the other team and work with what we’re given.”

Junior point guard Grace Moohart on the Cardinals led the team with 24 points against the Leopards.

“Going in, we knew that it was going to be a tough game,” head girls basketball coach Mike Motsney said. “We knew that we had to cover the shooters, and if they went off on with their shooters, we were going to have some problems. That’s in fact what happened there. That’s tough to recover from.”

The team will take on the 4-4 Van Alstyne Panthers at home on Friday for senior night.

“Van Alstyne is not the same team as we’ve been playing as far as skill is concerned, so hopefully that’ll help us,” Motsney said. “Hopefully, we’ll be able to get some of that stuff cleaned up and have a good senior night. I think we’re going to probably be able to execute some things a little bit easier than in the past based on how they play, and what I’ve seen on film, so hopefully that all translates into a win.”