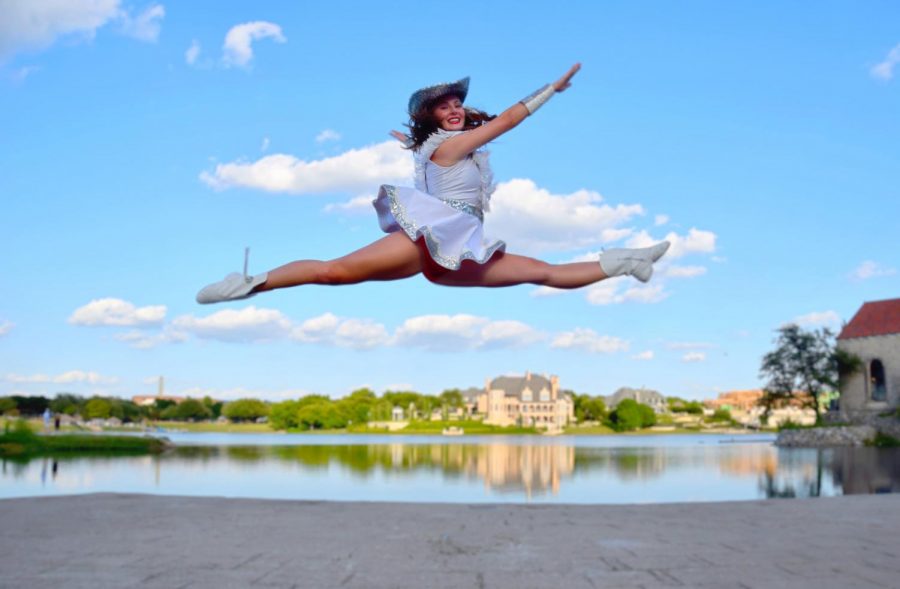 Senior Sydney Spors is the Majestics team captain this year. Spors began dancing when she was eight years old and has been rising in the ranks of Majestics for the past few years.
At A Glance
Favorite fast food: Chick-Fil-A

Favorite animal: Sloths or llamas
Looking Deeper
The Red Ledger: What role do you play on the Majestics, and what are some of the tasks this requires?

Sydney Spors: This year, I am blessed to serve as the Majestics captain. Some of the main tasks this role requires is keeping my teammates accountable, being a role model, not only in practice, but in life outside as well, and helping run practice. I also help with choreography and help our director make decisions.

TRL: How did you become captain? What classes or teams were you on beforehand?

SS: The tryout process to become an officer is long and difficult, but it is totally worth it. We go through several interviews with different people, which has helped me prepare for when I have job interviews in the future. I have been dancing since I was eight, which is a little bit of a later start than most people, but as soon as I started dancing, I joined the competitive team at my studio. That is where I grew my dance abilities that helped me become the captain. One thing that most people don’t realize is that to be an officer or even captain, you can’t just be a good dancer, you also have to be a great leader, and I think that my leadership abilities have grown stronger as I have matured.

TRL: What is your favorite part about being on Majestics?

SS: I have loved every single part about being a part of Majestics, but my favorite part is definitely the family and sisterhood aspect that comes with being on the team. As soon as I joined the team, I met the group of girls that became my closest friends. I also find it so special that I am able to get to know people I wouldn’t normally talk to if we didn’t have the common connection of being on the team together.

TRL: How do you manage your time between school and Majestics?

SS: Luckily, Majestics is very easy to manage with school expectations. For example, since practices are in the mornings, I don’t lose the homework time at night. I have found that I have gotten better at getting my work done ahead of time if I know that we have a practice or performance during a time that I would usually spend working on something else.

TRL: How long have you been captain of Majestics?

SS: I have held the title of captain since May, but I didn’t really start with the tasks of the role until July when we had our team line camp. Last year, I held the title of junior lieutenant, which prepared me more for my role this year.

TRL: Do you plan to join a college team when you leave the high school?

SS: Yes. I plan to try out for the Rangerettes in July, and if that doesn’t work out, I am considering trying out for the dance team at [Texas] A&M. The Rangerettes were the first drill team that was created, and it would be an amazing experience to be a part of.