TRL’s Lindsey Hughes reflects on her recovery after scoliosis surgeries 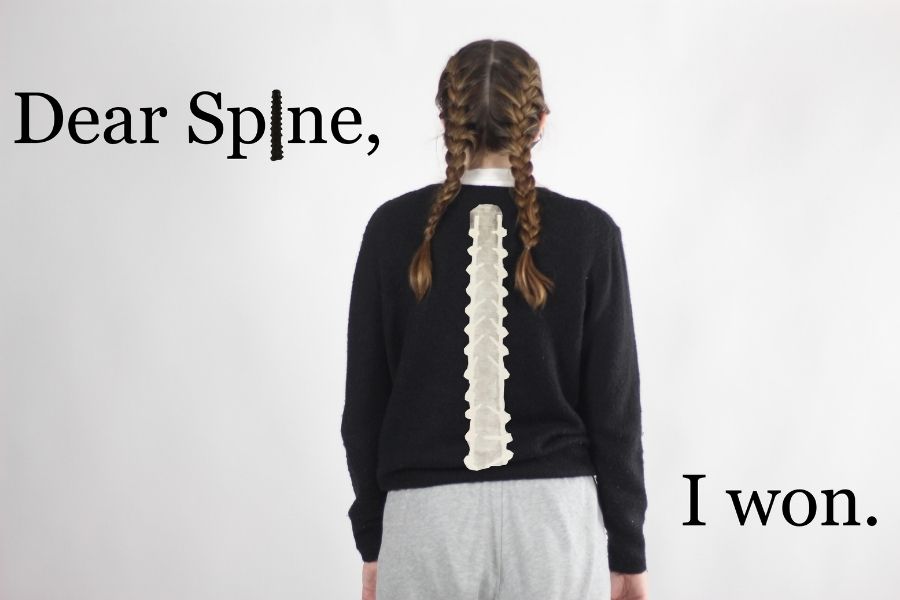 Well, well, well. It’s nearly a year later, and look how things have changed. You once controlled my life, and now you are bound by the just acts of my surgeon. December marks my last visit (hopefully) with the doctors, where we talk all about you. You always were the center of attention, huh. Brace this and degrees that. We could go on and on about you and the ramifications you bring to my life. Not anymore, bud.

I know you’re mad at me, okay. Out of nowhere, on a random day in May, you watched the doctors slice me open, exposing you and your vertebrae, just to be contorted and bent. They placed two rods down the sides of you, secured you with 24 screws and turned you into what you dreaded most, perfection. Believe me, I know how bad it was, and me being the cry-baby I am, dreaded the IV more than the recovery they put us through. What I didn’t realize was that those months of recovery were far scarier than the poke of a needle could ever be.

You’ll be pleased to hear that after my seven-hour procedure to correct your wrong doings, I didn’t wake up with the satisfaction that I won the war. In fact, it felt more like you had defeated me. That week in the hospital brought more physical pain than I could have ever thought to be possible. What I thought was a 10 on the pain scale before surgery, I could now consider obsolete. I mean, it makes sense considering the fact that they did rearrange my insides completely, all thanks to you.

You made me feel small.

Procedural habits, such as walking, eating and even breathing became tasks that I had to retrain my mind and body to accomplish. I took for granted the ease that was required to finish a meal or walk up a couple of steps. The effortless series of motions that was changing my clothes in the morning became a mental task I had to relearn, almost as if I was a baby, new to the world. Though the nurses were so accommodating and patient, you still managed to bring the burden of pain to every part of my life. Because of COVID-19 restrictions, my dad was the only one allowed in the hospital with me, and not having that outside support was just as bad as our recovery.

Though you put me through a daze of a week that blended days with waves of consciousness, I  do remember the pain you brought me. I was only allotted pain medication for you every thirty minutes, but even when the green light signaling me to press my morphine pump wasn’t on, I would still hit it with what strength I had, in hopes that some relief would come. The problem though, was that if I had enough pain medication to soothe my agony, I wasn’t conscious enough to breath on my own, resulting in sleep apnea, followed by more (you guessed it) pain.

Your immediate recovery was only followed by a more impactful period of isolation. My days at home included physical therapy, occasional visitations of friends and A LOT of lying around. When I could build up the energy to sit up, walk around my neighborhood or do a craft, I took up that opportunity so very quickly. The slow recovery only motivated my hopelessness and depression, and I began to give up.

“You’re not okay, Linz,” my dad would say. I didn’t want it to be true, but it was. I was not okay. When the progress of my back seemed to flatten out and I began to experience sharp pains running down my lower back and leg, I realized you had really done a number on me. Not only was I not okay, you weren’t either.

After convincing my doctor to look into my pain, I finally had an answer for what was happening to you. A screw that was placed in my lower left vertebrae was hitting a nerve, causing shooting pains down my body.

“You can either wait it out and see if it gets better, or take it out with another surgery,” Dr. Isador Lieberman, my surgeon said.

Those words sat in my head, but I knew I had to remove the screw. You are a persistent spine, you know that? I knew from the beginning that you weren’t going to give in to me.

Surgery in July could not have come soon enough. Every day with this pain was another day of you — still– controlling my life. When I woke up from the anesthesia for the second time, I knew that you no longer had power over me–me and my now 23 screws. Within minutes, I was able again. Able to walk, sit and stand without your pain.

It is pretty pathetic that you let a two inch titanium screw, well, screw you over. Now that it is gone though, I feel that sweet victory. Yes, I still hurt after lying down or sitting for too long, or even when I sneeze, but the sacrifice I made despite  you is worth it.

The empathetic gestures of my dad, friends, family and strangers are parts of our story that I will remember, not the trials you put me through. When my hair turns grey, and my skin becomes wrinkled, I hope I live to recount the acts of service that the people in my life have shown, whether it be through gifts, cards, prayers or other acts. I hope I live to recount the sacrifice and unconditional love that my dad gave to me along the way.

So, to my spine, I hope you know that I never hated you. I just needed your stubbornness to allow myself to grow. Don’t let that get to your head though.