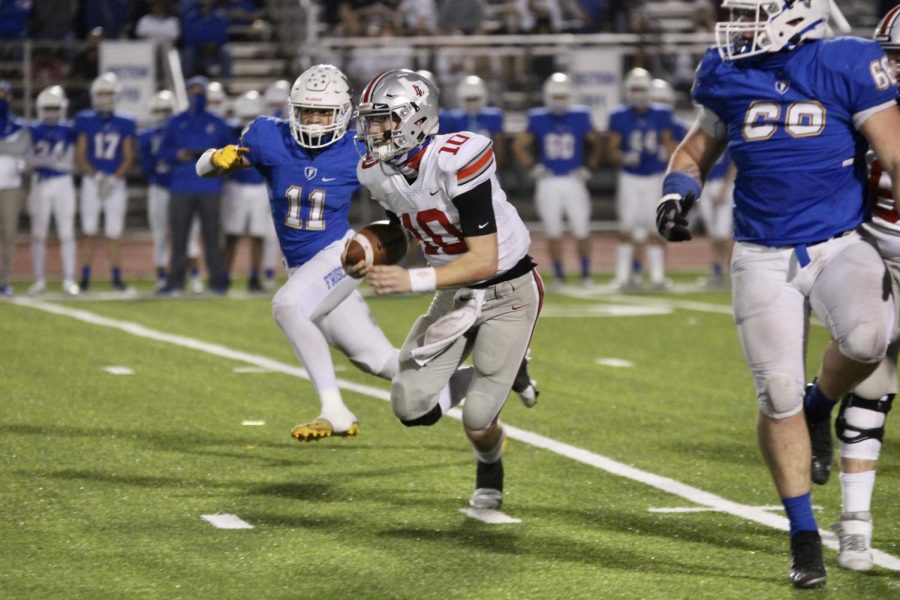 Senior quarterback Ralph Rucker runs the ball for 10 yards before being brought down on the 48-yard line. The leopards had a total of 198 rushing yards.

The football team (8-0) gave the Frisco Raccoons (7-1) their first loss of the season on Friday night. The Leopards were down 14-3 at the half, but came back to win by a score of 38-28, scoring in every drive in the second quarter except the last one.

“I told them at halftime, ‘we just got their best shot, now it’s time to give them ours,’” head coach Chris Ross said. “[Frisco] had everything that could possibly go right for them happen in the first half. Our team was prepared and had full confidence that we were the better team, and that we were going to win. We have phenomenal leadership on this team, and that is why we are 8-0.”

Senior quarterback Ralph Rucker believed a big swing in momentum came from a fumble by junior defensive backs Justin Lewis and Trent Rucker, which was then recovered by sophomore Jaden Bennett.

“[The win] was very exciting, especially after last year,” Rucker said. “After losing to those guys, we knew that this year was a very big game. Throughout the week, coaches preached that it’s the biggest game of the week, so we took that into consideration, and played how we always play. We prepared really well and it showed on the field.”

Going into the game, Frisco was ranked number five in Dave Campbell’s Texas High School Football Rankings, and Lovejoy was unranked. Lovejoy is now No.9 and Frisco moved down to Nov.10.

“I was lost for words [after the win],” junior linebacker Dillon Magee said. “Frisco has always been the team to beat in our district the past couple of years and to finally do it was incredible.”

In Ross’s opinion, there are things to improve upon every week, no matter the size of the win.

“Our coaches remind us [that] average teams will just take a week off after a big win thinking they are all that,” Magee said. “We want to keep our streak going, and carry our momentum into this week by cleaning up our missed tackles and taking ownership in our footwork, and eye discipline.”

This week the team will face off Lebanon Trail at home on Friday at 2 p.m.

“The key to success against Lebanon Trail will be the same as every week,” Ross said. “There’s no big secret to winning other than just trusting that everyone will execute their job and play as hard as they can to keep our family together.”