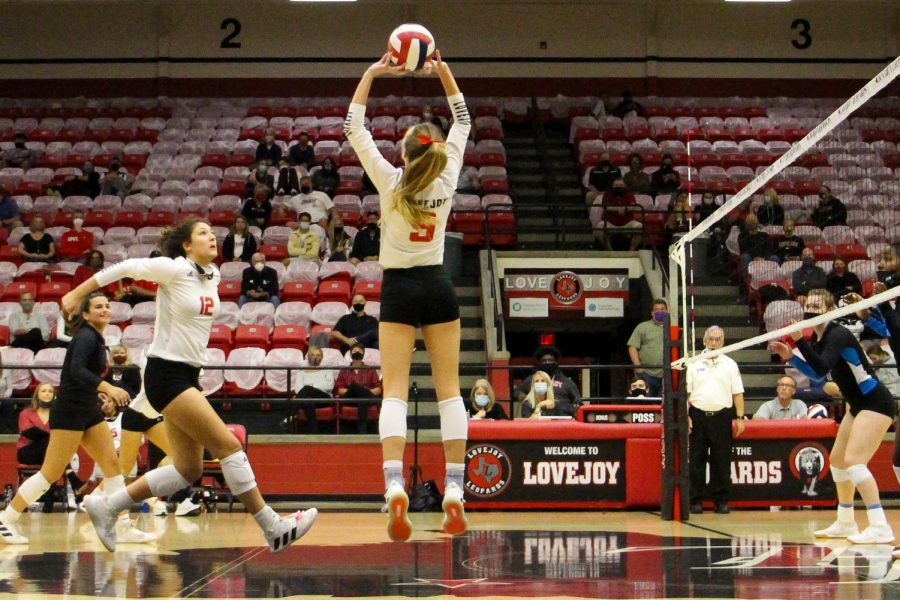 Junior Averi Carlson set the ball to allow for the return by sophomore Hannah Gonzalez. The return by Gonzalez wins the point for the Leopards.

The volleyball team finished out their district season with a win against Frisco Rock Hill on Friday. This win contributed to an undefeated district record of 14-0.

“I think we played great as a team,” senior outside hitter Cecily Bramschreiber said. “This game, we were able to get all positions involved and get a little more prepared for our more competitive upcoming games”

The team set a goal for this season to finish their district season undefeated as district champions. The team has said that their competition in districts doesn’t challenge them, so they use district games as preparation for the playoffs, where they will see more competitive opponents.

“Through districts, we have worked on running a fast and diverse offense that will help us in our later games,” junior middle blocker Grace Milliken said. “We are expecting more competition than we have seen so far in the playoffs, but we have been preparing with some good games against Sachse and Guyer.”

There is a warm-up match against Denton Guyer tonight to give the team extra practice before their first playoff game on Thursday, Nov. 19 against a new opponent, Frisco Memorial.

“Going into playoffs, our mindset is that every team has just a little expectancy to win, including us,” Bramschreiber said. “This means that we have to work just as hard, and even harder, to get to the end again.”

The team will be entering the playoffs again this year with a hope to win the state champion title again. They have discussed how they will focus on playing one game at a time with a competitive mindset as their competition increases, moving further into the playoffs.