Fairview mom runs for reelection on the town council 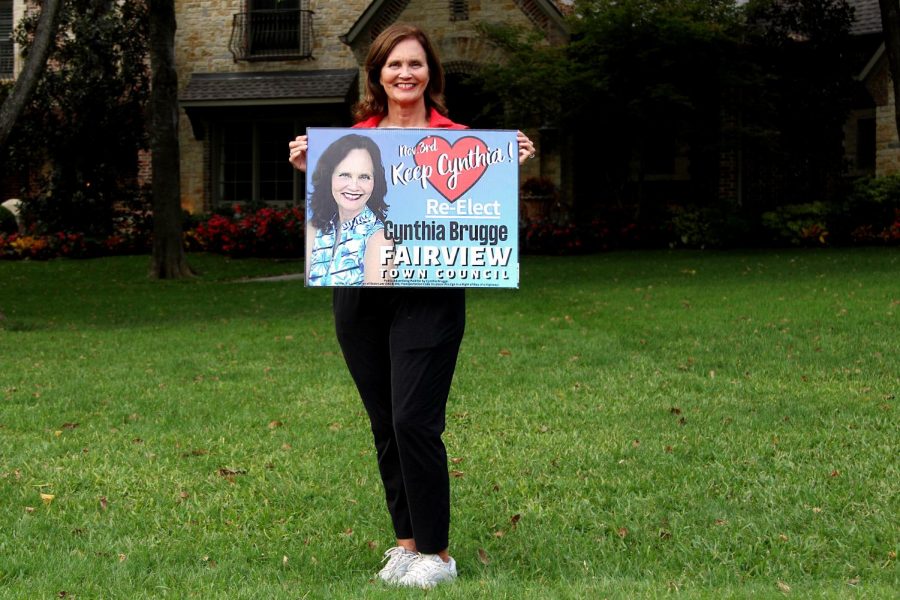 Fairview Town Council member Cynthia Brugge holds up her re-election sign during a campaign event. Brugge along with Roland Feldman are running for re-election.

Juggler: someone with a loud, striped onesie whose face is covered in white and a dull red nose. A person with magical hands that throws three, four…five pins in a rhythm for a show. Cynthia Brugge is a juggler. Except, she does not throw pins for her show in a onesie or a red nose. She instead juggles being a 63 year old, a woman, a mother, a mortgage broker and realtor, a wife and a councilwoman.

“There’ll be times when we’re on a walk and that same woman with the flooding issue [will be] outside mowing her lawn,” daughter and Lovejoy alumna Caroline Brugge said. “My mom stopped and talked to her for like 30 minutes. Things like that where she makes [an] effort to be intentional and listen to people and then actually follow through with those conversations. She still makes a huge effort to spend time with me, but it’s really cool to watch her.”

Cynthia Brugge is running for reelection on the Fairview Town Council for seat two against  Gregg Custer.

“I think it’s really important that you have different people on your council because they need to be independent thinkers,” Cynthia said. “You need people that as they learn things, they have their own opinion about them, and they’re not just rubber stamping things they’re actually thinking about it and asking other people. [They’re] trying to figure out how they should vote on things based on what’s best for the town and for the citizens. I feel very strongly about that, and that’s why I’m volunteering.”
Her Mission
Cynthia wants to continue to use her knowledge of finance from her real estate job toward the town of Fairview.

“I have a passion to serve the people, and I do not believe that I should borrow money that I don’t see how they can pay it back,” Cynthia said. “I am very supportive of the employees that work for our town, and I have really good business sense. I can see that sometimes you have to approve expenses because if you’re going to have a functional department, then you’re not going to have that if you’re not willing to spend the money it takes.”

One citizen has a stream running down between them and their neighbors house. The people that live behind the citizen increased the size of their house but weren’t required to provide a drainage plan. When the stream came back, it started eroding the property. This issue is one that comes to Cynthia’s mind when thinking about how to solve the drainage problem.

“That’s a good example of where I want to change the ordinance,” Cynthia said. “If you decide that you’re going to improve your property, then you have to decide what your drainage plan is going to be and submit that to the town. I think further than that, they really need to sign an affidavit that they understand that they’re not supposed to send water over to their neighbor’s property, and if they do, they’ll be required to fix that.”

In order for the council to make any decisions about an issue, the issue has to be put on the agenda by the mayor or two councilmen/women. It is illegal for the council to talk about the issue in public or private without the public present and the council cannot respond to the residents at the meetings, so Cynthia wants to make change.

“Right now we don’t even have a way that we go over those things, those topics that were brought up and address them in a future meeting,” Cynthia said. “That’s another thing I want to change, to have an agenda item where the council goes through and says, ‘Okay, last week we had comments about this,’ and they give them some kind of feedback.”

There is seven percent of vacant land to develop for residential property left, but there is commercial development land in the commercial district which the town plans to develop between now and ten years from now.

“As unpopular as it may be, I think that we should be very restrictive about the zoning of that seven percent,” Cynthia said. “I think that we should require impact settings before we grant selling. I think that we should be looking for alternative ways to send water instead of just sending water to the same direction as everybody else which is kind of what happens. We should be looking at the impact that that’s going to have on the roads that service that area. I’m going to be asking a lot of questions and wanting our council to support requiring that we have a full feasibility study.”
Previous Years
Cynthia has been a mortgage broker and realtor since her early 20s. After a phone call and convincing that people will vote for her, she ran for council in 2018.

“The biggest achievement in the first year was grasping and understanding of how much of our budget is allocated to public safety and understanding how important that was to the citizens,” Cynthia  said. “When I first joined the council, I didn’t know anything. I didn’t really think about the budget or how much it costs to run the town or anything, so learning that and then going through a bond election and finding out how dedicated our citizens are to pay taxes for public safety, really opened my eyes.”

Cynthia’s family has lived or owned property for 20 years in Fairview.

“People think about this race as a win-lose,” Cynthia said. “It’s actually who will be selected to serve, and so it’s an honor to be serving the town. But, it’s a voluntary position. We’re not paid for it, and it takes a lot of time. The last two years have been a revelation for me of how important it is to understand where you live and the decision to make and just how much power there is being on the council. What’s actually driven me to be theoretical reelection has been the realization that I have spent the last two years understanding the issues.”

She sees the lowering of taxes to an efficient tax rate, increasing the budget for public safety and creating a narrative for drainage issues as “the best part of [her] show.”

“We were able to effectively lower the tax rate, and that took a little bit of guts because I was trying to figure out how in the world we could afford to have a second fire station at the same time that citizens were asking us to lower taxes,” Cynthia said. “It was really a dilemma to know exactly how to handle that, and our ultimate decision was that Rolland Feldmand and Tony Mati and I, who were all new, voted for the effective tax rate.”
Campaigning
Sharon Inman, Cynthia’s friend who is a Lovejoy mom and a social media consultant, designed her sign. Whenever Cynthia sees Enman, she yells “I love my sign!”

“I had to buy signs, and then that was the announcement that we were running,” Cynthia said. “As far as my campaign has been concerned, I didn’t have a lot of time to do a lot of door to door, but even more it has been hard to know what exactly to say to people because as you can tell I can tell a lot.”
Family thoughts
Mark Brugge, Cynthia’s husband, supports his wife while she is running for reelection.

“She is the perfect person for the job,” Mark said. “It’s a non-paying job, and no matter what you do, you’re going to upset at least 20 percent of the population. And of those 20-40 percent of people that you upset, you’re just trying to make a decision. You don’t mean to hurt anybody’s feelings, and then they get their feelings hurt. And, they say things that aren’t true or they twist the truth. It’s ugly.”

Caroline calls her role the “encourager” of the campaign.

“I think it’s really important to have that perspective,” Caroline said. “Most importantly, she genuinely cares about people and their opinion, and she seriously takes so much time out of her week for an unpaid position. It just blows my mind honestly. The way she makes her income is through [how] she gets sales, so the fact that she sacrifices time to go get business to support this city says a lot about her priorities and her intention of running.”