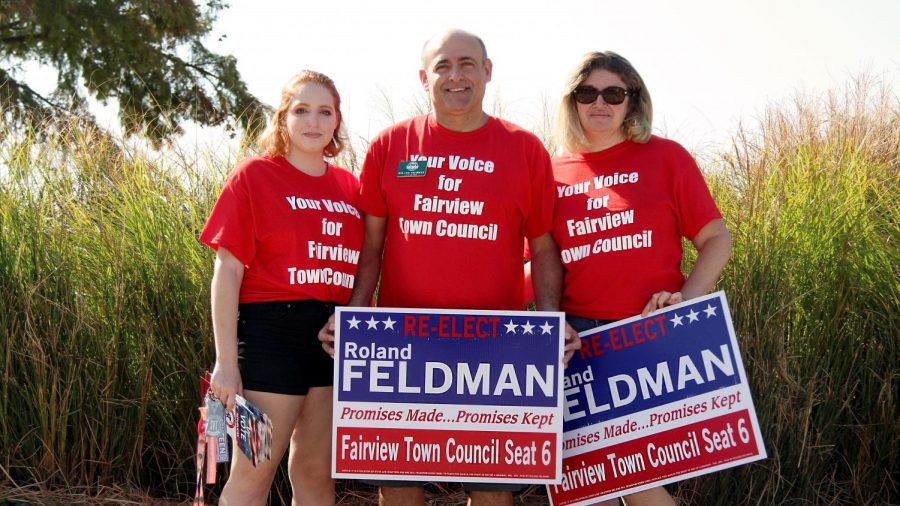 Roland Feldman stands with his daughter, senior Ariel Feldman, and wife Fiana Feldman. Feldman is running to be re-elected for Fairview Town Council.

‘Vote no on the bond’ signs kicked off his political presence in Fairview.

After hearing about the $25 million bond for the renovation of Fire Station No. 1, Roland Feldman dug into how much the average fire station costs in Texas and found it was nowhere close to $25 million. That’s when he started to stake signs around town.

A number of citizens suggested he should run for town council; he agreed and soon “fell in love with working with the community and the residents.”

Roland was elected onto the Fairview Town Council in May 2018 and is now running for reelection for seat six on the council.

“So he kind of was encouraged to run, and I supported him,” Roland’s wife, Fiama Feldman, said. “It was great. It was very different not anything that we had ever anticipated Roland would get into, but his passion for the town and trying to [take] little steps in improving what is already a really fantastic place to live.”
His mission
Since Fairview is a town with about 9,000 people, Roland noticed the fire station bond would increase taxes 20 to 23 percent. He thought this was “pretty extravagant for the town of Fairview.”

“Number one, I want to keep contributing to the community, but also what got me is the community, being sides of Fairview started spending a lot more money than they should,” Roland said. “They were using public funds to some extent frivolously, so l wanted to go in and, number one, again contribute, but number two is make sure that we spend respective of the community that we are so build the infrastructure to represent everything with community wants, but at the same time make sure that we are not overspending based on the population.”

The services the government provides such as the fire and police departments require upkeep by funding from taxes. Roland looks to maintain the quality and “provide a very safe environment” for the citizens.

“So tax was an interesting topic and I am very fiscally conservative,” Roland said. “What I mean is that the more money we need in the taxpayer pockets, the better. I think the town should again spend the money to provide the services that people want meaning fire, police, and so forth, make sure we maintain the roads, but do those again in a very respected, diligent manner so we’re not overspending build infrastructure that is again respected in the community, but then not to overspend not spend to build out the commercial district.”

Drainage issues from the increase of development are causing people who have lived in Fairview for 10 to 45 years to notice standing water on their property. Roland tries to find a solution with the developers.

“The town of Fairview was originally a large portion of it was a rock quarry basically many years ago,” Roland said. “And because of that we have a lot of drainage issues throughout peer reviews over the last year, year and a half, we’ve worked on fixing a lot of those drainage issues within Fairview. It’s important to our residents. At the same time we’ve had a lot of development. When the developers build on land, you have a lot of concrete and all that water when it hits the concrete has to have a place to go.”

There are two main service providers and one of them started leaving on Oct. 1. There is the choice of AT&T or Suddenlink as well as some wireless options, but the wireless receives more interference. Roland wants “a way for us to really provide high speed internet access” for the adults who work and kids who study at home.

“So there’s a couple of different ways we can approach it,” Roland said. “I think the best way is a public private partnership where the town of Fairview to some extent works with a private company to come build that. You got to make sure that obviously there’s a financial one for both the town, which services the community, and the private partner who is in business to make money so it’s a little bit of a give and take. The other piece is to work with the existing service providers we have such as AT&T and Suddenlink and make sure that they’re offering a better service. And the third way is [to] actually work with more of a state and federal government to help get some loans and grants and funds.”

When Roland looks to the future 10 to 15 years from now, he aspires to keep the country identity of Fairview where living next door to long horns, llamas, and horses is normal.

“I would rather Fairview maintain its identity, so if we build out very densely, very heavily then we allow a lot of these, the empty land that we have here to get rezoned into more dense developments,” Roland said. “Then we’re an extension of an Allen or extension of McKinney, so as you drive through Fairview you really don’t know when one town ends and one begins. This is why people want to live here and move here. It is for that unique identity. Otherwise, they can move to Allen or any other place when they are looking for a place to bring their kids.”
Campaigning
Because of COVID-19, Roland had to change his approach to campaigning.

“We’re trying to spend a lot of time at smaller events,” Roland said. “Also, [we are] going after quite a bit of social media and talking to people and residents to really understand what they want and how much we can better their lives year after year as the community changes.”

Senior Ariel Feldman, Roland’s daughter, is the president of the Turning Point USA (TPUSA) Club at the high school, which is a Republican club that helps with local and state elections.

“I’ve gotten a lot of my club members to help and volunteer,” Ariel said. “And, even when he was running the first time, I helped him by block walking and putting up signs. I mean it’s definitely a lot, but I’m really proud of him, and I think he’s doing a great job.”
Time management
Roland calls working on the town council as a “second full time job.” Outside of politics, he is an executive salesman for a technology company that requires him to travel the world.

“I do still attend all the meetings personally,” Roland said. “That’s important to me to be there, and talk to people personally as opposed to doing a video. When I do travel, I make sure my schedule coincides or does not overlap in anything we do here in the town.”

Even though his two jobs take up a chunk of his time, Roland still makes time for his family.

“He always makes time for his family, so he’s not overly doing one thing instead of hanging out with us or spending time with us,” Ariel said.