Sophomore Will Flinchbaugh shares his journey of pursuing a healthier lifestyle 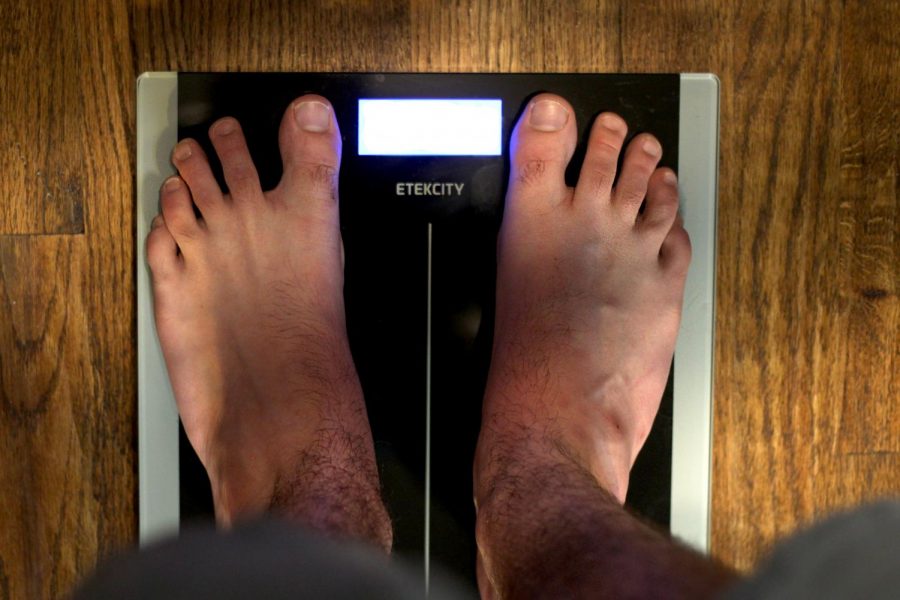 Sophomore Will Flinchbaugh checks his weight on the scale. Flinchbaugh's weight loss journey was seen through the dropping numbers.

He’s thrilled. After months of work, dedication and self discipline, he’s finally done it.

His weight is displayed on the blue backlit screen on his scale. He’s looking down at it in disbelief.

Just one milestone on Will Flinchbaugh’s weight loss journey.

“I checked my weight the day before, and I was at 14.4 pounds [lost], so I was really close,” Will said. “The next day after I showered I thought ‘It might be 15 pounds today.’ The scale was exactly at 15 pounds. I was thrilled. I was happy and excited that I had gotten that far.”

Taking the first steps
Will started fasting early in May after being inspired by videos of people online who were working out. His mom, Andrea Flinchbaugh, gave Will a schedule of a six hour eating window from 1 p.m. to 7 p.m.

“I felt uncomfortable in public because of my weight,” Will said. “I decided to be healthy. I was watching videos and found this dude working out. It made me want to be healthier. I’ve always struggled with anxiety and being uncomfortable in general. I figured if I was healthier I’d probably feel better. That started with me losing weight.”

Although this is not the first time Will tried losing weight, it is the most dedicated he has been to living a healthy lifestyle so far. Two years ago during the summer, he attempted to eat  healthier; however, he didn’t stick with his routines and gained the weight back.

“[The hardest thing to do] was probably switching my habits because I haven’t been exercising much, and I’ve been eating a lot for pretty much my entire life,” Will said. “Usually, whenever I was bored or something, I’d go into the kitchen and get a snack. It’s almost subconscious so you have to consciously think ‘no I don’t need to eat, I’m not hungry.’”

After a week of sticking to his plan, he stepped onto his scale one morning and saw how much weight he had lost up to that point.

During Will’s weight loss journey, he has faced difficulties along the way.

“I was over at a friend’s house, it was their family and my family,” Will said. “We came over around noon, and they were talking about food a lot. They ordered pizza, and it came at around 1 p.m., and it was a really good looking pizza. I couldn’t eat it because it wasn’t within my eating hours. I was really tempted. I didn’t eat because I couldn’t. I wasn’t allowed to. I was very tempted because usually if I were in that situation, I’d eat three or more pizzas.”

Seeing the results
Since telling his family how much weight he has lost, Will has lost another two pounds and is pursuing a healthier lifestyle.

“I think [he brought it up] before we started eating.” Will’s dad, Rich Flinchbaugh said. “He basically said ‘yeah, I’ve lost 15 pounds,’ and we were all like ‘wow.’ I was surprised. We didn’t have to say anything. He just didn’t like the way he felt and started doing it [losing weight] on his own. It makes me proud.”

While Will is still setting new goals for himself, his family is proud of the efforts he has made.

“It’s really nice.” Will’s sister, Grace said “I feel like he’s growing as a person. He wasn’t happy about his body for a while. It’s nice seeing him liking what he looks like and happy with his body and being comfortable in his own skin.”

After all the work Will put into fasting, weight management and self discipline, he has been able to see the benefits of his new eating habits. His current goal is to lose 25 to 30 pounds.

“My mental health is a lot better,” Will said. “I’m a lot more secure about myself. I always felt like I needed to hide my body at school and everything by wearing loose clothing or hoodies or something to cover myself, I feel like I don’t need to do that as much. That really makes an impact in your mental state. It’s crazy how much of a difference that makes.”