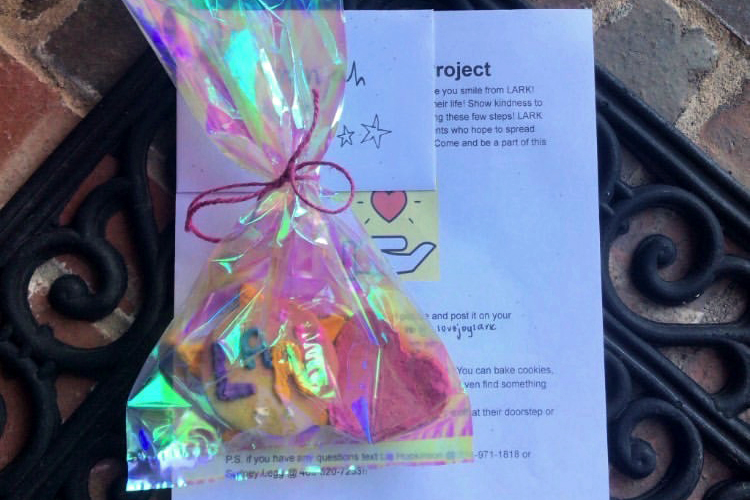 The LARK club has been spreading kindness through letters and small gifts. The club is run by senior Lia Hopkinson.

On Sunday, Aug. 30, Lovejoy Acts of Random Kindness Club (LARK) began their Kindness Project. The club officers decided to carry out this project by leaving small presents of appreciation at students’ houses with instructions to pass the love, in a form of a gift, onto another student.

“Because of COVID, it’s hard to do more things that LARK did in the past [handing out kisses for Valentines day, writing notes for the staff or helping with the Special Olympics],” LARK  president and senior Lia Hopkinson said. “So this was just an idea that we made in regards to trying to make a difference but still spreading kindness within the community.”

Throughout April and May, LARK officer and sophomore Sydney Legg and her father dropped off baskets at their neighbors’ houses every other Sunday. This experience influenced Legg to start the Kindness Project.

“I really enjoy dropping off different things [at] my friends’ doors and my neighbors’ because it makes them smile,” Legg said. “When we were talking about ideas and stuff we could do for LARK, I kind of thought of that and also thought of how we do baskets as a little kid. So, I was like ‘why don’t we do that but not halloween?’ It’s kind of a subtle thing to put at people’s doors, and it just goes on to a bunch of people to where it reaches more people than we could think of.”

The project started with 12 people and has grown to 19 people over the course of a week.

“We didn’t want to start with too many [people in case] it dies out and some people don’t pass it on,” Legg said. “We could always go back [and] give it to a few more people, and it starts again.”

Each gift contained cookies, an instruction page and a personalized letter. The instruction page had information for the club’s Instagram account (@lojolark), so that students could go and see who has received a gift already.

“There were a couple of different shapes [of cookies]; I made disfigured keys and cut them out,” Legg said. “And then I wrote LARK on them in three different colors (pink, blue, yellow and purple), perfect colors. I spread some colored frosting on and then on the stars I said ‘you shine bright’ or ‘you’re a star’ just stuff like that.”

The officers met up at Armor Coffee Company in Allen to write the personal letters that are placed in the gifts.

“It was just something that can lift their spirits if they’re not having a good day,” Hopkinson said. “I guess [the gifts allow] a little bit of social interaction because we’re missing a lot of that right now so just reminding them that they’re loved and people care for them is really important in these times.”

In order to ensure that students were passing the gifts down, officers would check in with the recipients.

“I think there’s always a little bit of doubt [that people won’t pass it on],” LARK officer   and junior Maya Dandekar said. “We tried to pick people that we thought would continue it and pass it on.”

Attention from the project helped spread the word about LARK and peaked the interest in other students to become members.

“We wanted to get people from different friend groups,” Hopkinson said. “We knew a lot of people until we were like, okay, people that aren’t the popular ones all the time…but they’re also kind people. We picked some girls in different sports, kind of widespread. We wanted them to be well known so that if they were to post on their social media then it would get a lot of people to see it.”

LARK is thinking of extending the Kindness Project to the faculty as staff appreciation.

“It’s just like, it’s really cool, it makes me happy it makes other people happy,” Legg said. “Getting an explanation either getting a text from them when they find it on their doorstep, or just getting a big hug. I did not expect that. [It’s] almost reassuring that we did the right thing. We thought it would make them happy but you never know, so maybe seeing it on people’s faces. It was really cool.”