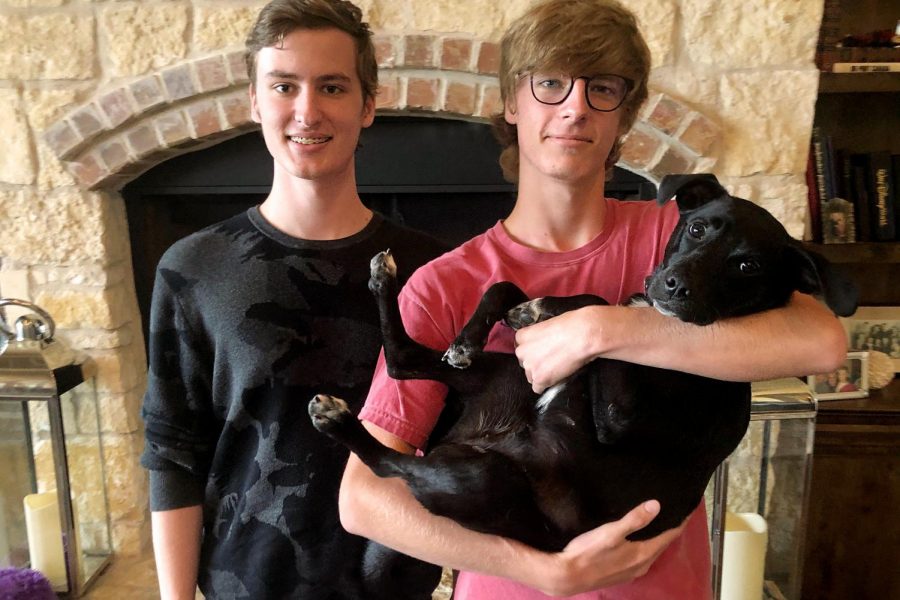 Seniors Ryan Schlimme (left) and Braden Schlimme (right) rescued their new dog, Bailey. Braden said he was "amazed at how energetic she was, and friendly."

With the only information of “I need your help. No time to explain” Braden hurried out the door alongside his father.

“I grabbed my shoes and socks and ran out the door, got in the truck and we took off,” Braden said.

Braden soon found out the reason behind his father’s panic was a Facebook post his mom, Kim Schlimme had seen earlier that morning. She was watching a Facebook live in which she saw an abandoned dog run around a parking lot, looking frantic and lost. She knew she had to do something.

From the moment Braden and his dad spotted the dog in the parking lot, they saw a glimpse of their new family member’s personality. They watched as the black lab puppy ran fearlessly from car to car, looking for someone to take her home.

“I was amazed at how energetic she was, and friendly,” Braden said. “So I was excited, and I knew that was a good sign with any dog if they’re going to be that friendly right off the bat. He’s probably going to be a good companion for the family.”

While they were out getting the dog, senior Ryan Schlimme was left at home with the stress of  “what if’s” that were overshadowing his excitement about his potential new family member.

“When I realized my brother and dad had already left to pick up the dog, that’s when I realized, ‘Oh gosh this is real,’” Ryan said. “And at first I was thinking, ‘What if it has rabies? We don’t know if it has diseases or not,’ and I was just kind of worried, but then I was like, ‘Okay we can figure it out. It’ll be okay.’”

While bringing an energetic puppy home posed its challenges, it also provided the family with entertainment and responsibility during the time of quarantine.

“Yeah, it’s a lot more crazy and stressful and rambunctious at times, but it’s also fun. It’s just a new thing to take on when there’s nothing really else to do,” Ryan said.

The new puppy has brought a new type of personality into the family now that she has adjusted to her new home.

Since rescuing their new dog, Bailey, Kim has found herself wondering what caused her to go through with the action. Something inside her told her to act on this opportunity.

“For our older dog, [Bailey has] been good because the older dog is kind of slowing down, so it’s been good to see her turn into a puppy again and play,” Kim said. “She just seems to bring us all together.”

Kim thinks this experience showed their family to “help out when you can,” and Ryan learned a similar lesson.

“Despite craziness in life and challenges that could happen, you can’t avoid a challenge, and it’s best to take it head on and one step at a time,” Ryan said.