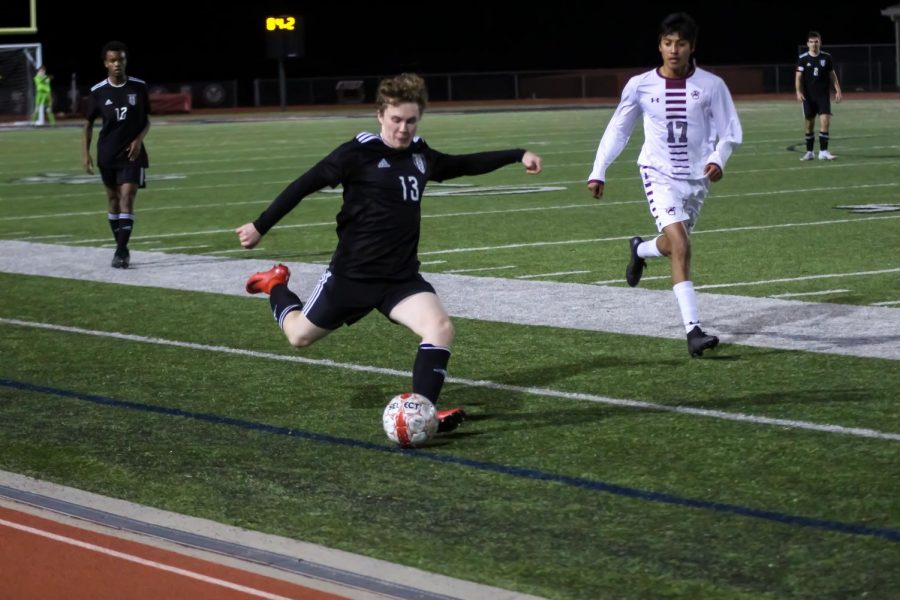 Senior Jake McTee passes the ball in order to keep it away from the other team. The team beat Sherman in overtime.

The boys varsity soccer team (7-1) had an overtime win on Tuesday against the Sherman Bearcats (4-2); the game ended up being determined by penalty kicks after each team scored only one goal in the first two periods. The team’s win secured them the first place spot.

The team hit all four of their penalty shots and junior goalie Sammy Merrick was able to limit the Bearcats to one goal out of three shots.

“I thought I played well overall, ” Merrick said. “I felt like I could’ve done better during the game by not conceding a goal which sent us to PK’s (penalty kicks).”

The boys were only able to score once in the two periods, after giving up the ball several times during the game. Junior forward James Finch talks about how the team played on Tuesday compared to past games.

“We played ok,” Finch said. “We were not looking up before we passed the ball and we were basically giving the other team the game at the beginning. Our team needs to improve on working harder toward 50/50 balls. We don’t put enough effort into it which leads to them getting the ball more often.”

Team practices enabled success during the game by giving the team time to practice penalty skill kicks outside of game time.

“I wasn’t surprised at all that we went perfect from the penalty spot,” Merrick said. “Everyday once practice is over the coach has players he wants to take penalties to prepare them for moments like we had on Tuesday night against Sherman.”

Although penalties are a necessary part of the game, they are not an accurate measure of success for the team.

“For me personally when it comes to PK’s, the goalie is at the disadvantage because the goalie isn’t expected to save it, the player taking it is expected to score it and so when the first Sherman player stepped up to the spot I was nervous and then when he shot it and I saved I was fired up because that was a bit of pressure taken off our shoulders,” Merrick said.

When picked for the penalty shot, the single point depends on the player and their one shot into the goal.

“I was a little nervous but confident at the same time, because our captains helped me calm down,” Callicutt said. “Coach makes us practice PK’s constantly, which helped us a lot and our goalie (Merrick), came up big saving two of the shots.”