Girls soccer to face Denison after loss against Wylie East 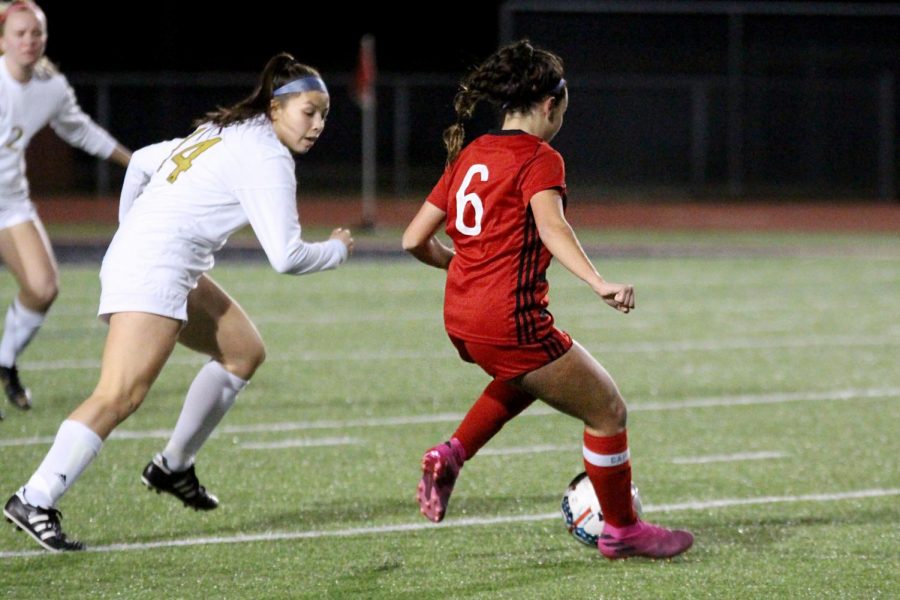 Senior Reagan Matacle does a cut right to get around a player from The Colony. Lovejoy lost the game with a score of 4-1.

The girls soccer team (4-2) looks to repeat history against the (1-5) Denison Yellow Jackets on Friday, Feb. 28 after the week’s previous 2-0 loss against Wylie East.

Head coach Ian Keeble lays out his plans for him as well as the Lady Leopards for Friday’s game against Denison.

“Today we are going to meet as a team and review some things and do some team bonding,” Keeble said. “Thursday is the day before a game, so the practice won’t be too stressful, but we do need to look at some things from last time we played them and look to exploit their weaknesses.”

Senior Reagan Matacale has confidence in her team this week against Denison.

“I’m confident in our ability to win this week’s game because I know what we’re capable of, but we just need to play at the high level that we have been playing at,” Matacale said.

Coach Keeble and the team plan to learn from their mistakes in the last game against Wylie East on Tuesday.

“You can learn so much more from losing a game than winning one which is what I thought we did the past two games,” Keeble said. “To ensure we win on Friday, we need to take those lessons we learned from the past two games and apply them. We also need to make sure we are focusing on all the basic principles that have taken us to where we are now.”

Matacale has an idea of what the team needs to work on this week to prepare themselves for Friday’s game.

“In the next game we really are trying to finish our chances off crosses and winning the 50/50 set pieces, so that’s been our main focus this week,” Matacale said. “The team really needs to focus on keeping our composure in the final third because we get to that last play or the last pass and we don’t capitalize when we really need it most.”

Despite their loss to Wylie East, according to Keeble their confidence remains unaffected.

“I think we are fine confidence wise,” Keeble said. “We just got punished for our mistakes the last two games. For a young team, and a team that is improving upon what we built last year these things can happen.”

However, for junior Hannah Dunlap, the team’s confidence seems less certain. She hopes to move on from the previous loss in Tuesday’s game.

“I’m a little [suspicious] because we didn’t have a great game on Tuesday but I think we will be fine,” Dunlap said. “Our team was very upset and we all seemed to have less confidence.”

Moving forward after playing the Raiders, the team looks to execute better.

“We need to make better decisions on the ball more consistently, improve our combination play in the attacking half, find and exploit space better, and win our individual battles.”

Matacale believes the team still has what it takes to beat the Yellowjackets.

“Right now we’re at a relative low because we dropped two games we shouldn’t have,” Matacale said. “But that hunger inside of us is still there and we’re doing our best to grab that district title, one game at a time.”