Girls soccer looks to move on from ‘fluke’ defeat 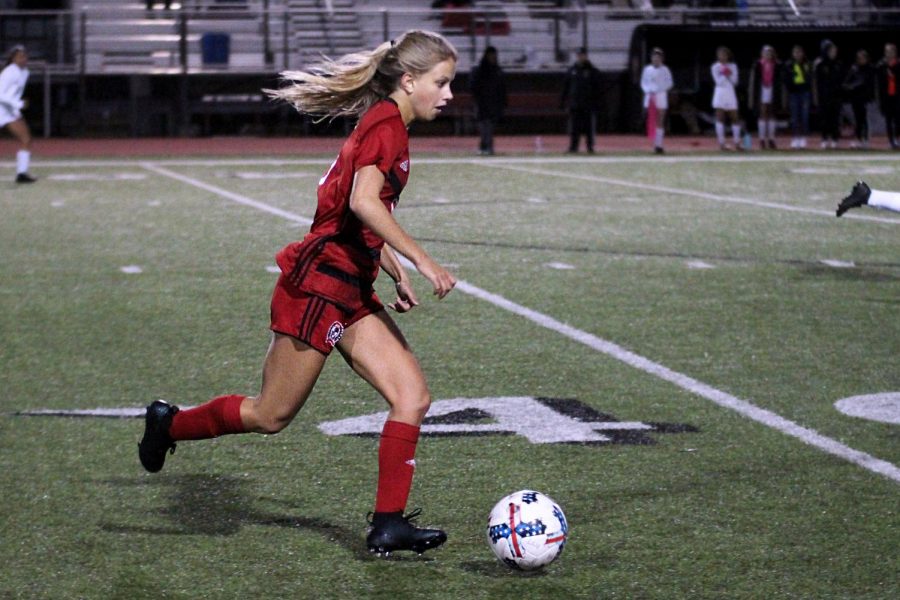 Junior Hannah Dunlap dribbles the ball to look for left wing Reagan Matacle. Dunlap assisted the Leopard's goal in the first half.

“It was a tough loss and everyone was pretty beat up about it,” junior Hannah Dunlap said. “I think the best thing for me is just to put that aside and realize that it’s a new game and we have to go into it ready.”

Next week Wylie East is on their home turf, and the team will look to feed off the home-field advantage.

¨A key factor for us going into Wylie East is to keep our cool and bring the fire back,¨ Matacale said. ¨We marked ourselves with a target on our heads by becoming tied for first this year [as opposed to] fighting for third place last year.¨

Dunlap stated the key factors necessary for a win over Wylie East.

¨I think the key factor to beating Wylie East is never give up and put everything you have into the game so you are left with nothing and feel like you did everything you could to win,” Dunlap said.

With five games of district under the team’s belt, Matacale said the team needs to recover during the stretch run of the season.

¨Right now the most we can do is just rest and recover,” Matacale said. “The team’s pretty banged up because of an intense first round of districts.”

Matacale said the team is ready to flush Tuesday’s performance in which it probably deserved a better fate.

¨Last week was a fluke really for us,¨ Matacale said. ¨We had the team on the ropes the whole game. It was just five minutes of weakness and they capitalized. We had many more chances, but luck wasn’t on our side.¨