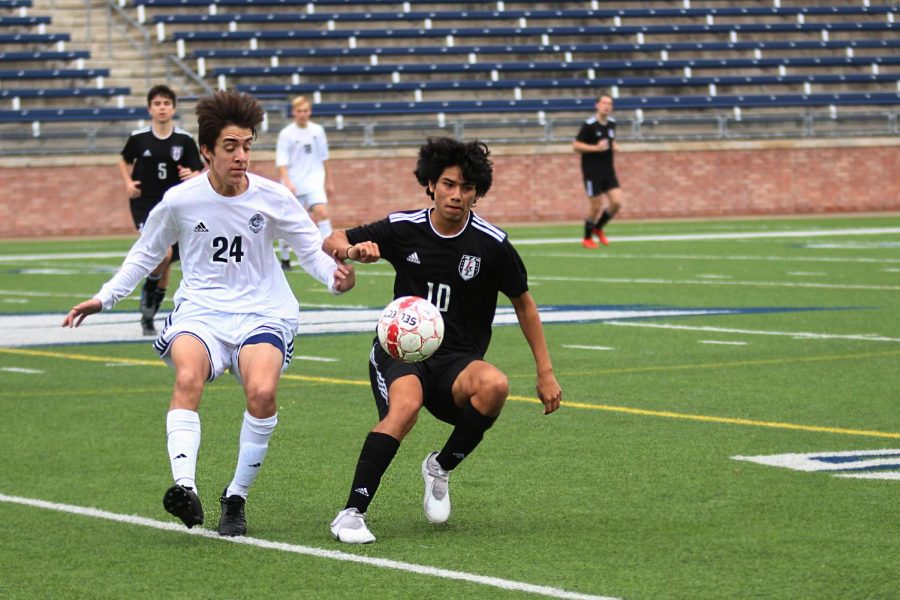 Senior Diego Rodriguez fights for possession of the ball.

The offense seems to be heating up as the team has scored six points in the last two games. Coach Duran said the team played well against Wylie East who he mentioned can be an especially tough opponent.

“[We need to] stay the course throughout the entire game,” Duran said. “East is always a tough opponent. We had a plan and the boys did an excellent job of executing that plan.”

Senior team captain Alan Beaney is looking ahead at the district title as they hope to eventually achieve that goal of being district champs.

“Starting off undefeated in district play with a win against a tough Wylie East team definitely gives us some more confidence as we look to fight for the district title,” Beaney said.

Beaney’s role on the team as one of three captains is something he takes great pride in. There are several responsibilities that come with it.

“Being a positive communicator and a leader by example on and off the field are some of the extra responsibilities that come with the captain role,” Beaney said.

Junior goalie Sammy Merrick said he has full confidence in today’s game against Denison, especially since he has the home crowd on his side.

“I have great confidence in tomorrow’s game just because it is home and having that home field advantage makes the game easier for us,” Merrick said. “Having a large crowd behind us helps boost the team to victory.”

Duran says that letting the fans down in the teams first home game is the last thing they want to do, but a little help from the crowd would go a long way.

“We want to put on a good show for those who come out,” Duran said. “There is a great buzz about this team and its potential. We don’t want to let our fans down. It is our hope that our home field is known as a difficult place to play. While the team will do its job we hope the fans help create that additional home field advantage.”