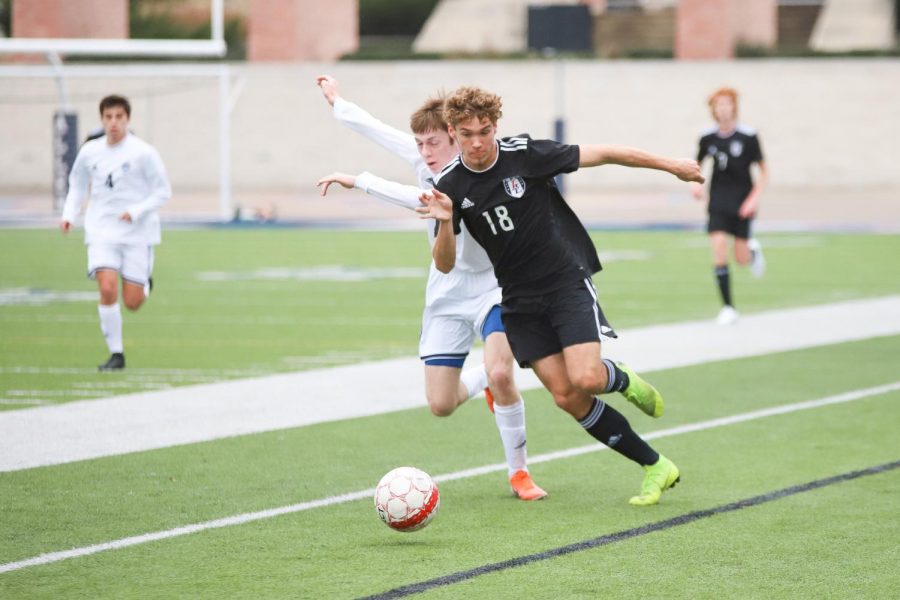 Junior Riley O'Donnell advances the ball down the sideline during the first half.

With their district opener on Tuesday, head coach Alex Duran is pleased with how the team is playing and is ready for the challenges ahead.

“Our team is one who expects to win,” Duran said.  “As a coach you want to see how they will react to a performance that for them was not up to our standard. They did not disappoint.  We simply started the game with more intensity and finished our opportunities early which changes the complexity of the game for the competition.”

Junior goalie Sammy Merrick was happy with the win but believes the team can still do better and put up more points offensively.

“I would like to see our team score more against Sulphur Springs because we had lots of chances against Denton Ryan but couldn’t put the ball in the back of the net,” Merrick said.

Merrick included that the team did well on not committing fouls against Denton Ryan in which they were not doing well on in previous games.

“The team did well by not giving up fouls close to the 18 yard box because in previous games we get to grabby and commit fouls close to our goal, and luckily this year the opposing team hasn’t scored a goal off of a set piece close to the 18 yard box but we just need to limit the fouls during the game,” Merrick said. “I would like to see us work the ball more in the middle instead of always kicking the ball upfield because it doesn’t always work and we sometimes try and force it.”

In preparation for the rest of their district play and their game against Sulphur Springs, the team has continued to practice the same way as the players have high intel on the game according to Duran.

“We have intelligent players who can adjust to different formations if needed,” Duran said. “That is the great thing about this group. Of course we shadow play and make sure everyone knows where they are suppose to be and can recognize the pros and cons of any formation we are playing against.”

Senior captain Michael Branch talked about his favorite part of the season so far, as they got a chance to get away from home for a few days and create a bond with their teammates.