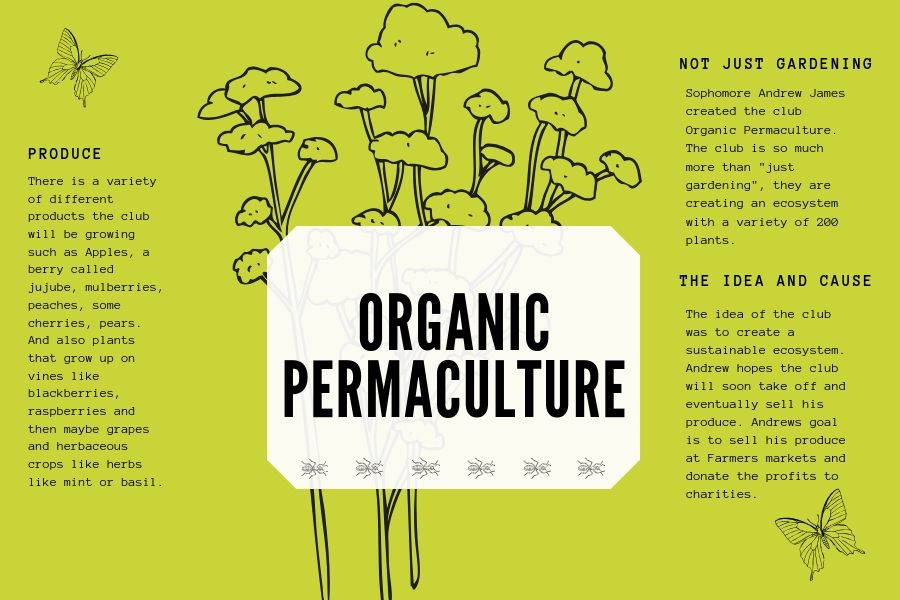 The Organic Permaculture club hopes to sell their produce at the Lucas Farmers Market in the future.

Rather than just meeting in a classroom to talk about the environment, the Organic Permaculture club is a hands-on group that learns through experiences. The club is centered around creating a sustainable ecosystem on their plot of land off of Ingram Rd. In order to create a sustainable ecosystem, members will follow a detailed plan over the upcoming months.

“Even though permaculture is technically gardening, it is more like an ecosystem that requires less maintenance and is holistic,” club founder and sophomore Andrew James said. “You have a lot more freedom to shape the forest into whatever you want it to look like and provide a peaceful place with shade to rest. You are given the opportunity to watch your masterpiece grow and produce delicious fruit, unlike many annual gardens that die off every year and produce boring vegetables.”

Going from a barren plot of land to a fully functioning ecosystem takes time. The club works toward creating a food forest that is sustainable, similar to naturally occurring forests, so the set up is the “most important part,” according to James.

“When creating the design, we have to consider sun exposure, water, wind, slope, variety selection, [which is] extremely important for trees, chill hours (amount of hours below 45 degrees before a tree will awaken from dormancy), rootstocks, and soil,” James said.

Beyond the design, James and club members plan for the future. Because club members are involved in organic permaculture, the club will not use fertilizers. Instead, they will plant cover crops, such as clover or vetch, that convert gaseous nitrogen into something the plants can use.

“To recycle nutrients, we will start with a sheet mulch. The mulch will become the next two years’ soil as it breaks down and attracts funguses that help break down soil and form beneficial relationships with roots of trees,” James said. “We will also add in a cover crop that we will cut down every season which builds the soil and acts as a living mulch.”

The club provides experiences that members would otherwise not be able to take part in. It has brought members closer together, and acts as an outlet for their shared interest.

“I never knew much about agriculture and I definitely didn’t know what permaculture was, but now I’m the vice president,” sophomore Sam Bluestein said. “The main motivation that made me want to join was the opportunity to socialize with friends more and make a few new ones. Of the nine club members, I was only friends with two of them prior to joining and now, we’re like one big family.”

The club is currently planting a wide variety of fruits and herbs. Eventually, they would like to sell at the Lucas Farmers Market, with profits going to charities.

“We’re growing almost any tree, fruit tree, that you could think of that grows in Texas,” James said. “Apples, a berry called jujube, mulberries, peaches, some cherries, pears, and also plants that grow up on vines like blackberries, raspberries and then maybe grapes and herbaceous crops like herbs like mint or basil. Just a huge variety of plants.”

James got the idea from his dad who suggested he build on his passion of pomology, the study of growing fruit. He has been working with club sponsor and biology teacher Aimee Hunter, who has discussed the plans with James and likes the “interesting venture.”

“Andrew has shared a two year vision that will create a sustainable, natural retreat for the community and students to enjoy,” Hunter said. “The idea is that it can be used as a peaceful retreat to enjoy nature, an educational center and a productive garden. I can’t wait to watch it flourish.”