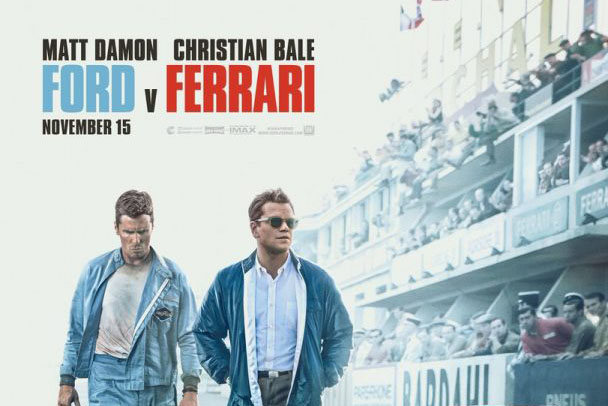 "Cinematically, there is not much to speak of, but there does not need to be. This is a movie centered around its characters, not it’s effects or shots."

Ford v Ferrari stars Matt Damon and Christian Bale as the duo of Carol Shelby and Ken Miles, the racer designer combo that gave Ford its vengeance against Ferrari in the riveting 1966 LeMans classic.

I’ll be the first to admit that I have a bias toward loving historically based films, especially those who really get into the nitty-gritty of the development of the events at hand. Ford v Ferrari is one of those films, there’s little to do outside of the development of the GT-40 and the politics of LeMans, so the film laser focuses, and does an incredible job of telling the story.

The movie is character driven. Ken Miles, by all accounts, was one of the most charismatic individuals in the 1960’s racing scene, and Bale’s impression is dead on. Combine that with the down-home, southern outlook of Shelby, these characters have real chemistry together, keeping even the slower points of the film interesting. It should be noted that the best films are the ones that do this banter best – look at the original Star Wars trilogy, Once Upon a Time in Hollywood, or any show / movie with a good ensemble cast.

These characters make the largely corporate motivated actions of the conglomerate Ford seem human. There would have been no other way to tell this story – Miles talking to his car, Shelby talking along with the race – these are the human elements, the people side of the sport that can come out during a 24 hour race like LeMans. Ford v Ferrari makes these aspects apparent and exciting.

Cinematically, there is not much to speak of, but there does not need to be. This is a movie centered around its characters, not it’s effects or shots. The sound design is great though. Gear changes feel substantial, and the cars have a great mechanical sound that conveys the true driving experience that existed without driving aids in 1966.

One piece that does stand out is the attention to presentation. Much like any historically based film, there has to be a certain detail to the accuracy, and this film succeeds in doing so. Original footage is sprinkled in to even give a layman’s perspective, which is a nice touch.

The story is somewhat generally known by the majority before even entering the theatre, but this telling is fresh enough and well done so as to make it well worth your time. There are both good and bad ways to spend two hours, and this is certainly one of the good ways.