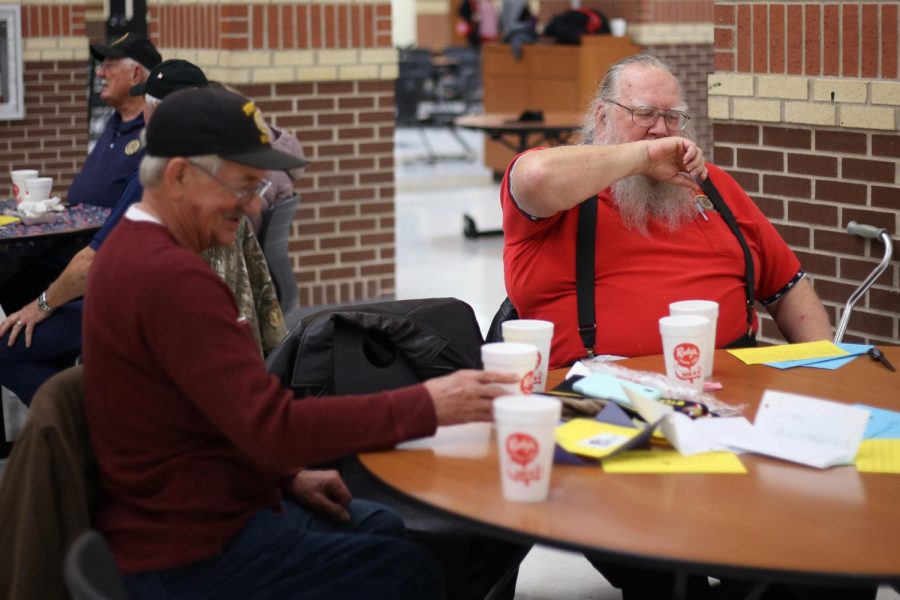 Don lange (right) shares their story and finds common ground about his experiences with a fellow veteran. Later during the Veteran's Day Dinner on Monday Dr. Mike Goddard, the Lovejoy Superintendent, asks the veterans about their experiences in the military.

Don Lange’s draft number is 29. He doesn’t want to go to Vietnam though, so instead of letting himself be drafted, he enlists. His assignment–Vietnam.

Lange’s plane touches down at Tan Son Nhut Air Base in Saigon amidst a mortar barrage. Lange and other men are hustled in by men who had already arrived.

After the mortar barrage, Lange goes to his station and gets signed in. He is given a Remington 870, his best friend throughout the war. That shotgun went everywhere with him. He showered, it was near. He ate, it was near.

The rest of the war is a mix of gory details. Lange and his fellow soldiers just do what they feel they need to do to come home. It may not all be speakable, but it’s all necessary.

But after it all, Lange isn’t welcomed home with open arms.

Lange sits next to a marine on an aircraft on his way home to California. As he and the marine walk out of the LAX terminal, they are greeted not with posters welcoming them home, but with an anti-Vietnam War protest.

Lange and his fellow soldiers are treated like “dirt” when they return home. They are called “baby killer.” They have eggs and tomatoes thrown at them. They’re “lower than a snake’s belly.”

Lange doesn’t respond outwardly to the protest. The marine on the other hand walks straight to one of the protesters and punches him. Hard. His fist lands right on the man’s chin and kocks the protester out cold.

To this day, Lange still chuckles about the memory of him and the marine walking past the flattened protester.

The first family member Lange sees upon arrival is his mom. Then he sees his World War II veteran father, and the two spend hours talking about their experiences in war.

The pair get “royally drunk” as they exchange stories. It’s the only time Lange has ever heard, or ever will hear, his P51 fighter crew chief father talk about World War II.

Lange still doesn’t talk much about Vietnam unless it’s with other soldiers. The experience that deepened the bond between Lange and his father, bonds him with every brother who’s seen combat.

At the Veteran’s Day Dinner, Lange talks about the war with a purple heart sitting at the same table. Lange doesn’t talk to just Vietnam vets. When he talks to veterans of more modern wars he likes to start with “yeah, you guys did it in the sand, we just did it in the mud.” To him, that’s the only difference.

Maybe not everyone will understand or appreciate what Lange and other combatants went through, but Lange is proud of what he did to defend America because it still helps to defend future generations.

When Lange talks about his sacrifice, his eyes start to water. Tears start to fall. And then he silently cries, shoulders shaking, unable to go on for a few moments. When he does start speaking again, his voice becomes a bit more grave.

That is why Lange did what he did in Vietnam.