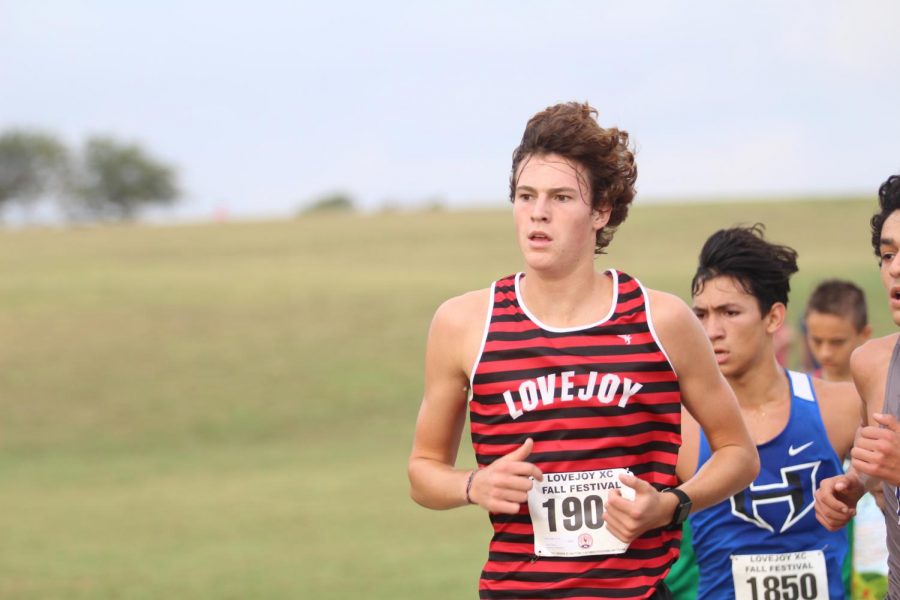 Senior Grant Gueller races at the Fall Festival at Myers Park in McKinney, finishing with a time of 16:54.87.

The boys and girls varsity cross country teams took another step towards their goal of a state championship by competing in the Region 2 meet on Monday, October 28, at the Jesse Owens Athletic Complex in Dallas. Coming off strong district performances, both teams kept the momentum going by securing their spots in the state meet on November 9.

The girls team finished in second place with a total of 82 points while Highland Park finished just ahead in first place with a total of 81 points. They will be advancing to the state championship meet as a team for the first time since 2011. They were led by freshman Amy Moorefied who crossed the finish line second overall with a time of 17:29.90 while Amelia Carothers also cracked the top ten as well with a ninth place finish at 18:46.16.

Just a year ago the girls team only sent two runners to the state meet, but after a very strong season, senior Zoe Bessa said the girls team is ready and feels they have the ability to step up on the podium in Austin.

“Well getting second place is a big deal and gives us a lot of confidence for the state meet,” Bessa said. “Especially since we were so close to actually winning, we feel as if we can definitely see potential in us making the podium at state.”

The boys continued their dominance and took home first place at the regional meet with 60 total points, and the next closest team was Frisco Reedy in second place who finished with 151 points. Senior Will Muirhead led the way by finishing first overall with a time of 14:59.30 while senior Brady Laboret finished sixth overall with a time of 15:31.31.

The boys team will be entering fimilary territory in Round Rock by going for the third state championship in four years, Laboret said they will still continue to do their normal workload leading up to the meet to prepare.

“With the opportunity to win our third state championship in four years, we definitely don’t want to take the opportunity for granted,” Laboret said. “We will continue to train hard and although we’ll taper a little we’ll still be working hard and fast.”

Senior Whitson Bedell, who finished 19 overall, said it is a special feeling to run with the same group of guys for all through high school and compete for a state championship.

“To be able to run with this group of guys I have trained with for all of high school, and take a shot at winning the state meet is the reason I still run for Lovejoy,” Bedell said. “It’s a bittersweet feeling to know that this is one of my last races and it means everything to me that we give it our absolute best.”

The boys and girls will travel down to Old Settlers Park in Round Rock for the state championship meet on November 9.