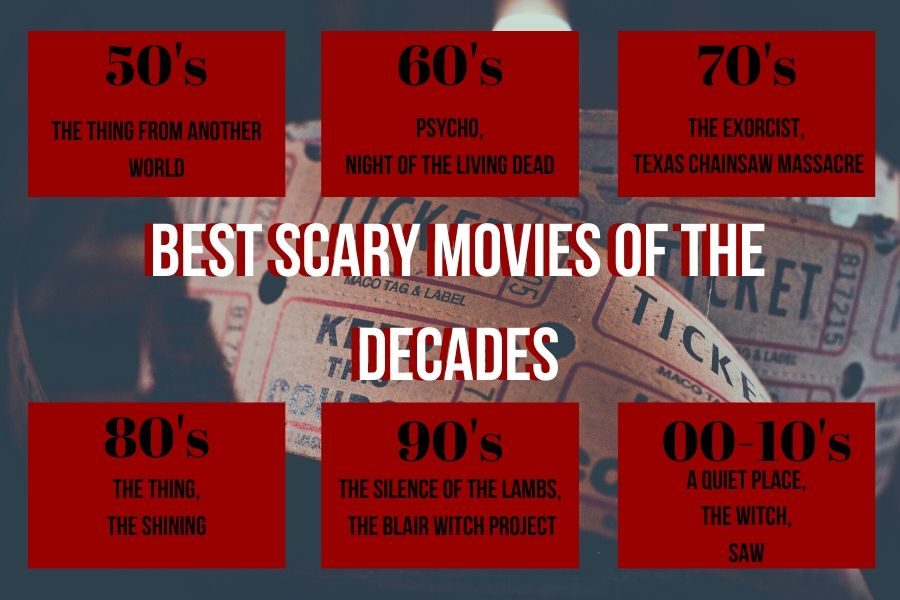 Maroney's list includes horror classics such as The Shining and The Exorcist.

Halloween is on the horizon, and that means scary movie season is in full swing. Often, I find that taking a chance on a new horror movie can be somewhat disappointing, hence this list of my tried and true classics, arranged conveniently by decade, for your enjoyment. If you haven’t seen one or more of these, get cracking and have a Happy Halloween!

The Thing From Another World

This 50s horror film is less a classic and more of a source material for horror directors moving forward. Watch it not for scars but to understand later methods.

The obligatory Hitchcock film on the list, Psycho holds up better than The Birds, and has an iconic score that sets and incredible tone for the film. A true horror classic.

Night of the Living Dead

If you’re a zombie fan, you’d better watch the origin story. George A. Romero does a stellar job introducing the new monster to the screen, and helps it to endure to this day.

The Exorcist is a creepy film, especially for those religious souls amongst us. In it’s time, it was dubbed “the scariest movie of all time,” and while that may not hold up today, a good dark night and atmosphere can make up for the difference pretty well.

If you’re one of those people that cherishes moments where you feel like you’re on an FBI watchlist, choose this one. The sheer violence was unprecedented for the 1970s, and it was really a convention breaker.

John Carpenter’s adaptation of the 1951 film, The Thing is a practical effects masterpiece, using the best the 80s had to offer in terms of models, animatronics, and creative costumers. Couple that with a compelling and charismatic Kurt Russell performance, and this movie becomes a necessary Halloween watch.

There’s really nothing new to say about The Shining, other than that now may be a better time than ever to catch up on the original before the new sequel comes out later this year.

The Silence of the Lambs

This one will be my watch this year, as I haven’t seen it yet. It’s here because of the enduring legacy and my dad, who says it’s good.

A pioneer in the “found footage” genre, this movie (term loosely used) is one of the most truly scary experiences ever put to the screen, and is a triumph in independent filmmaking.

This movie spawned a franchise and marked a departure to the new style of horror aided by CGI we see today. Watch it to understand the horror you’ll see in theatres today.

This horror movie remains unique enough to make the list. While the universe it is set in is really more interesting than the movie itself, it’s a good watch for the thought provoking nature alone.

Lesser known film status aside, this movie is really a textbook example of how not showing the villain can be far scarier than seeing it all the time. Take note, future filmmakers.