Love where you teach 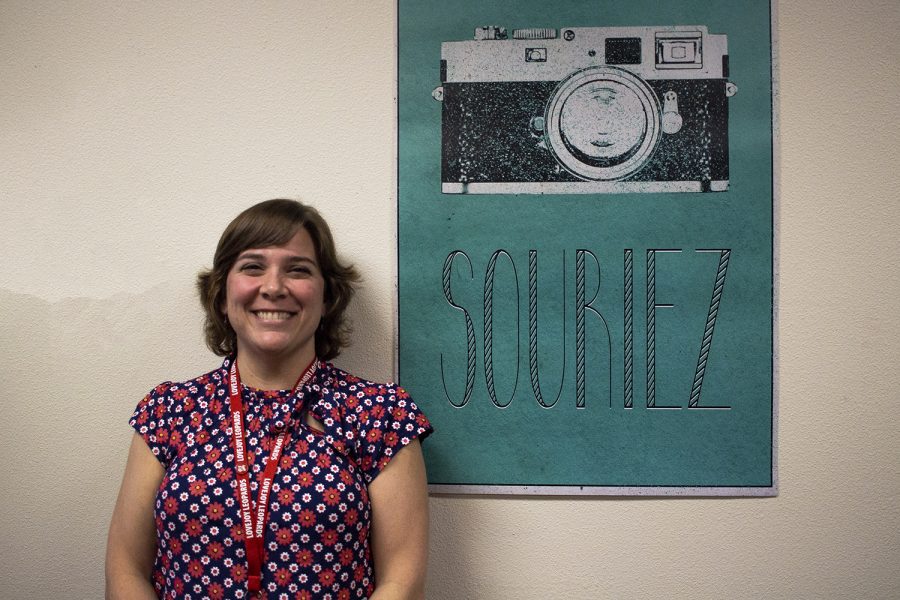 French teacher Billie Kelsey stands in front of a poster in her room that says “smile” in French, as it’s one of her favorite classroom decorations as a new teacher.

While exploring different courses as a music major at UNT in 1999, French teacher BillieJean Kelsey asked her French teacher what kinds of jobs she could get with a French degree. While she waited for him to turn his computer to what she assumed would be a google search for her question, turned out to be something quite unexpected.

“Well there you go; now you’re a french major,” her teacher said.

Although she loved music and wanted to be a music major, it was too competitive for her. Others would spend hours practicing every day and practice rooms were also costly to be rented often. After deciding to pursue a French major, Kelsey “felt absolutely wonderful and [she] never looked back.”

Kelsey had first heard about the school through her husband, who had worked on the phone systems in the classrooms.

“He saw that every classroom he went into, the students were engaged in the learning,” Kelsey said, “I thought to myself, ‘I want to work there.’”

Kelsey had taught at Carrollton for her first six years of teaching and took some time off from teaching for the last eight years to raise her kids. She also subbed in the district for the past three years. As there is only one french teaching position, Kelsey hadn’t been able to teach French until this year.

“She finally said she needed to vacate this position, and I snuck in,” Kelsey said.

“I’m having fun, the kids make it all worth it,” Kelsey said.

Even though she works part time, Kelsey’s “really dedicated.” according to students.

“She always available to come in before school and after school and she expects high things of us,” sophomore Sydney Chapman said.

Having three french teachers over the last four years, students were skeptical over what Kelsey would bring to the table. After students met her, she won them over.

“She’s great. She’s funny. She’s just hilarious,” French Culture Club President senior Zach Farrell said. “We had a dance party today after our presentation. She brings, definitely a unique energy to the classroom, and we all love that about her.”

Although she misses music, and frequently chastises her students who don’t know their music very well, Kelsey said she loves teaching at the school.

“I don’t regret it one bit,” said Kelsey, “This is the best place I’ve ever taught”.