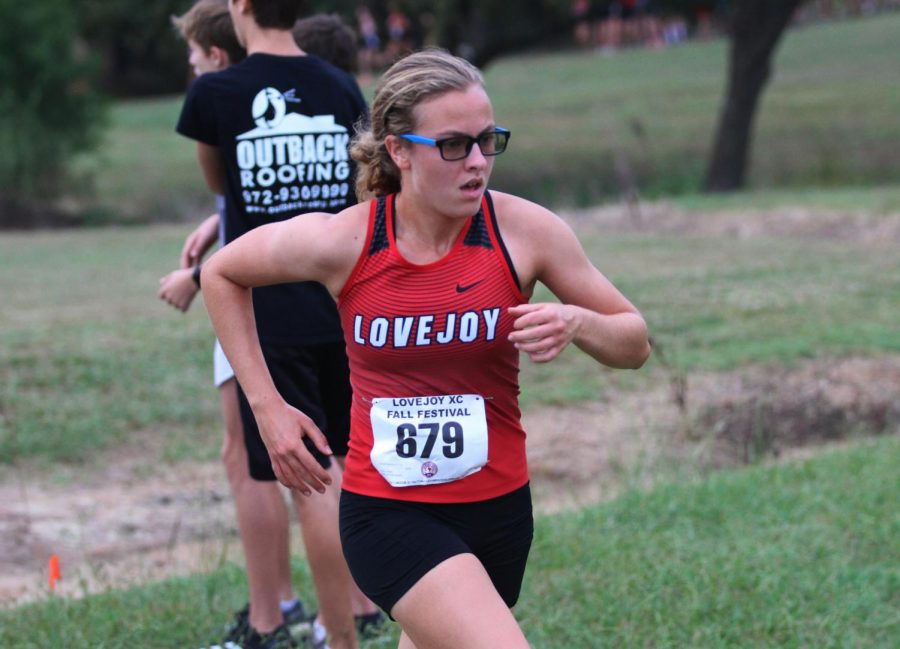 The girls and boys started off their official run to the state championships this last Tuesday at the District 10-5A meet at Myers Park in McKinney. Both teams dominated the 3.1-mile course by claiming both team and individual championships.

The girls team took first place overall with a point total of 21 with their runners taking seven of the first 11 spots. They finished in front of McKinney North who finished with a total of 56 points. The girls were led by freshman Amy Morefield who defeated three-time defending state-champion London Culbreath with a time of 18:15.8, while Culbreath finished in 18:51.87.

Junior Amelia Carothers finished third overall with a time of 19:49.7 and senior Zoe Bessa came in right behind her in fourth place with a time of 20:12.54.

Though the competition will be tougher for the girls at the regional meet, Morefield believes the girls have what it takes to continue to perform at a high level.

“We do realize it will be tougher competition at the regional meet, but we just got to run the way we have been training,” Morefield said. “We are way more confident after this meet even though some girls weren’t happy with their times we still know we have a lot in us to drive us forward.”

The boys team finished with all their runners taking seven of the first eight spots. They were led by senior Will Muirhead who took home first place overall with a time of 16:01.8 and second place overall finisher senior Brady Laboret who finished with a time of 16:28.75. The boys team took first place with a total of 15 points while McKinney North finished second with 58 total points.

Sophomore Riley McGowan, who finished fifth overall, said the boys team has a very good chance to come out on top at regionals due to the hard work they put in every day.

“I think our chances for coming on top at the regional meet are very high because our team has worked very hard,” McGowan said. “Our times as a whole have been dropping [every race] just like we have trained for.”

Although they are focused on the one goal of winning a state championship, Muirhead believes it is important to show the underclassmen how being committed to their team and their process brings upon success.

“As seniors, we want to help the underclassmen become committed to the team so they can ad to the success of the team,” Muirhead said. “This would keep the program strong in the future.”

The girls and boys varsity team will compete in the regional meet on October 28 at the Jesse Owens Athletic Complex in Dallas.