Column: In a word, cancer 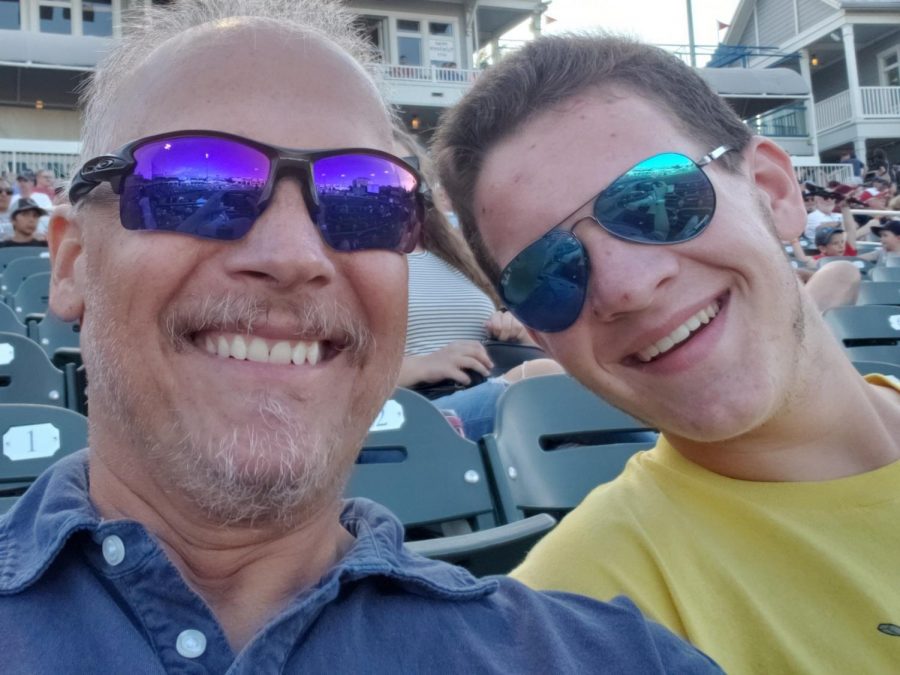 David and Justin Maroney smile prior to a Frisco Rough Riders baseball game in May. "Coming to peace with this has not exactly been an easy thing to do, and I really can’t say I have yet."

Maybe this is the time to write this all down; maybe it’s not. I don’t know how my thoughts on all of this are to change, and I still can’t say how it all will feel when it ends, but I can say that what cancer has done to this family is not to be understated. This won’t be easy writing, nor easy reading, but it may be a good form of catharsis for not only myself but for others in the same position.

It doesn’t help that nobody wants to hear it. Nobody wants to hear “my dad has cancer” or something of the like. So you shut it in, don’t talk a lot about it, and when you do, everything has to be fine, so nobody is uncomfortable. That’s not easy, but nobody wants a share of the hardship, so you move on, keep it at home, and if you’re lucky, you have an outlet like this to let it out.

All that being said, for contextual clarity I’ll tell you it began in April. Dad went to the hospital under the impressions that gallstones were causing abdominal pain, and that in a week or so, all would be well. So it was that two days later, after a litany of tests, we were told by a stone faced, insensitive doctor that he had pancreatic cancer. I broke down in front of the man, but he went right on talking, never paused, and quickly got through with what he had to say. Perhaps he himself was distraught, or simply jaded, but regardless it felt uncaring and clinical. Some doctors have been better, even phenomenal, but at the time it felt horrible.

Flash forward to today, it’s been six months, and things have stabilized, the grandparents went home, Dad retired, and I find myself at home as much as I can. There is no cure, no surgery option, so barring some great outlier, the hope is a few more years. Maybe Dad will see me graduate, maybe he won’t, but in the meantime I make the most of what I have. That isn’t said to sound fatalist, but more so realistic. Some go eight months, some 10 years. It all depends.

Coming to peace with this has not exactly been an easy thing to do, and I really can’t say I have yet. I slowly realized, through the first month or so, that my Dad wasn’t dead yet. I have always been close to him, but it was hard to treat him normally at first. Soon, I realized that he was, and always will be, Dad. Nothing in that has changed, although he may be thin, hairless, and tired.

But still there is an incredible uneasiness. It’s horribly difficult to focus some days; sometimes your thoughts never stray from home at all. There’s always that underlying threat that someone won’t wake up in the morning, or that something will go wrong, but that worry steps up to a fever pitch.

On a daily basis, for the last two weeks or so, I’ve thought about how to put this all down, the hope masking some level of helplessness, the soul searching you do to ensure you have no regrets, the fact that people remind you to “take care of yourself” in spite of your every instinct, but there is no coherent, logical way to put it all down, as after all the logical response would be to realize that all of us are going to die, but the truthful response is that we spend our whole lives avoiding that very thought. Maybe the end lesson of all of this is to cut it up and enjoy what you have; to live while you can.

Dad himself has commented on the irony that only this has convinced him that he had enough–enough money and work to stop worrying. For 30 years, he worked his tail off to make the endgame of retirement comfortable and fun. But just as he got to the time where it was possible to do so, well, you know what’s happened.

Personally, and especially with the risk of this being hereditary, I’m going to work only to where I have what I absolutely need, and simply seek fulfillment from there. Maybe that’s the best way to approach all of this and avoid getting caught up in basic concerns. In the meantime, I have my responsibilities: school, college applications, and financial planning if the worst does happen. If there’s anything I’ve gained, it’s the maturity to learn to do things despite their connotation. But it’s hard. I don’t feel like an adult yet, but the circumstance makes you grow up far faster than you or society wants you to, and maybe that’s the greatest tragedy of all.