TRL's Justin Maroney dives into the 'end' of the services like Netflix, Hulu 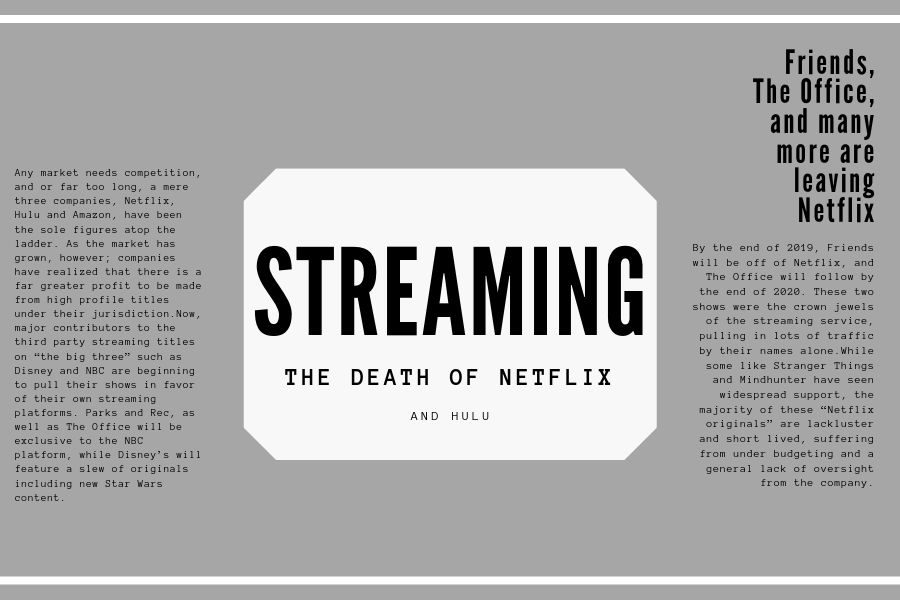 According to Maroney, Netflix's original productions often are lackluster despite the few that shine.

Netflix, arguably one of the most definitive icons of youth culture today, seems to be living on borrowed time. With shows like The Office leaving, and waning support for original series, Netflix along with other streaming services like Amazon Prime could be meeting their maker much sooner than people think.

By the end of 2019, Friends will be off of Netflix, and The Office will follow by the end of 2020. These two shows were the crown jewels of the streaming service, pulling in lots of traffic by their names alone. Without them, where will Netflix be? If their recent strategies have proved anything, they are looking to grow out of their dependency on third party titles through creating original series. While some like Stranger Things and Mindhunter have seen widespread support, the majority of these “Netflix originals” are lackluster and short lived, suffering from under budgeting and a general lack of oversight from the company.

So if originals are not the answer as to the future of steaming, what is? The true answer is the diversification of platforms.

Any market needs competition, and or far too long, a mere three companies, Netflix, Hulu and Amazon, have been the sole figures atop the ladder. As the market has grown, however; companies have realized that there is a far greater profit to be made from high profile titles under their jurisdiction. CBS was an early realizer, launching CBS: All Access in 2014, using franchises such as Star Trek and The Twilight Zone to buoy the platform while gaining support for their newer shows. Now, major contributors to the third party streaming titles on “the big three” such as Disney and NBC are beginning to pull their shows in favor of their own streaming platforms. Parks and Rec, as well as The Office will be exclusive to the NBC platform, while Disney’s will feature a slew of originals including new Star Wars content.

Netflix’s great weakness can be seen through the pulling of these titles. Their prime disadvantage is their lack of great franchise names, like Star Wars, Star Trek, The Office etcetera, thus leading to a great dependency on these megacorporations for their content. This leaves them with little choice other than to pave their own path, which, based off of prior observations, doesn’t seem to be panning out.

There is a glimmer of hope, however. The proof of this new movement will ultimately fall to the consumer. How many pay walls is too many? When will a customer want to stop remembering passwords for 6 different sites? Whose favorite shows only fall under one network? There are many questions to be answered, but the safe bet is that these companies will find a way to make it work, Netflix included. Unless anyone fails to make any effort to modernize, nobody will go the way of services like Blockbuster. Every show will have some following, and thus their platforms as well. All told, only time will tell what the quality of streaming will be as we move forward, but now is certainly a time of change in the media world, and change usually means a shakeup. Expect big changes and moves to come.