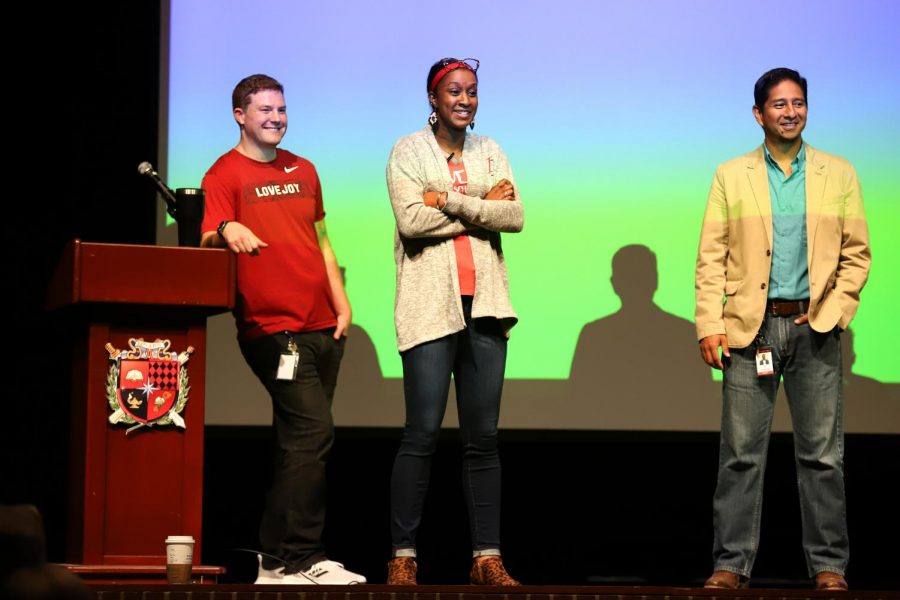 Counselor Mary Shaw-Cabrera will be counseling alongside Michael Gerhard (left) and Joel Ledezma (right). The counselors were introduced during Founder's Day.

Two strangers working together as one, Michael Gerhard and Joel Ledezma joined staff expecting to create a relationship solely with the students, but also ended up forming a strong bond with each other.

“We are not completely alike in many other ways,” Gerhard said. “We are actually quite different in a lot of ways, but he is honestly one of the coolest people I have ever met. [I] totally enjoy being around the guy.”

Working alongside Ledezma, Gerhard has had the opportunity to develop a relationship with his fellow counselors as well as receive guidance from them.

“We definitely confide in each other,” Gerhard said. “I go to him for questions I have while I’m just trying to work through something, and his opinion is something I respect.”

Ledezma said he joined with the passion for giving a voice to students and to give students a relationship with their counselor that he didn’t personally receive.

“I didn’t get to speak much with my counselor [in high school] and I felt that, you know what, being a counselor, I feel that I need to speak more with the students, but also kind of give more direction as far as post secondary educational opportunities,” Ledezma said.

Ledezma looks forward to being involved with the community of students.

“I am most excited for the students, and the opportunities that are available for the students,” Ledezma said.”[I’m excited to] to help out and to encourage–from the fine arts departments to the athletics departments, to all the extra clubs, extracurricular activities, just kind of being part of the Leopard crew here.”

Ledezma said he has goals to support all departments in the school, but has a special connection to the fine arts department as he has a passion for percussion. Ledezma has played drums since middle school, and he now spends time playing at his church as well as watching high school and professional drum corps perform.

Similar to Ledezma, Gerhard said he hopes to be able to help guide students and help them have the best time in their high school experience, and also reach their goals for the future.

“Why I got into education in the first place was to work with students, to help out students, and really just be there to help students have the best possible time they could have,” Gerhard said. “I was always focused on the college side of things, I always wanted students to get to whatever their college or career was, kind of guide them in their path and also helping them with whatever issues they had.”

Gerhard started in the engineering field, but later realized his passion was in teaching. In the past five years, Gerhard has worked at five different districts in addition to teaching English in South Asia for three years prior and says the experiences cannot compare to the community he has at the school.

“The people here are [an] awesome community of individuals at this school,” Gerhard said. “Not just the people I’m working with, but also the student body is unparalleled. It’s just different here, there’s just like this attitude that Lovejoy carries with them it’s very similar to a hug. In my opinion it’s like this Lovejoy hug.”