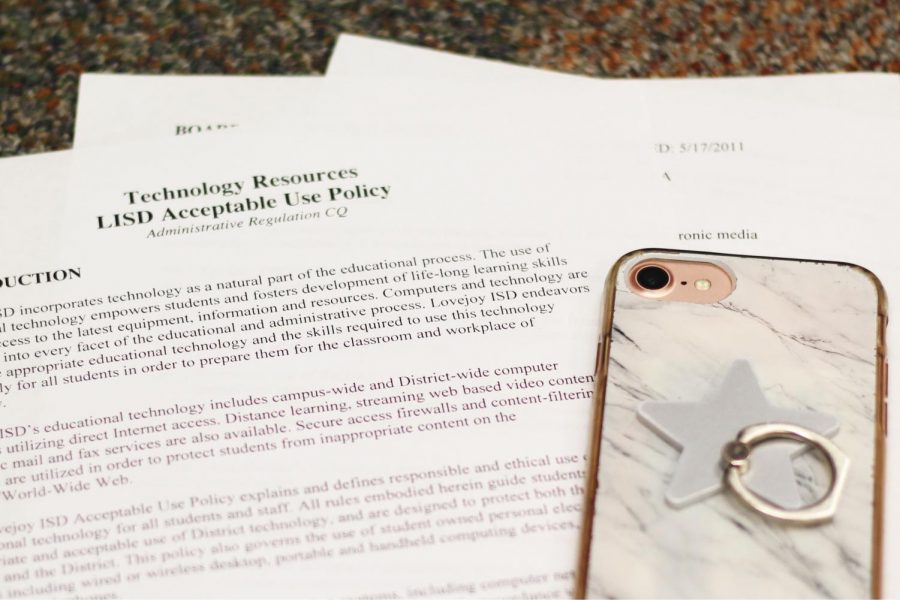 The new policy removes cell phone usage during school hours at Willow Springs. Student cell phones are permitted for students before and after school, but earbuds in class and phones during the school day, including passing periods, are prohibited.

Editor’s note: This story was updated on Oct. 1 at 11:55 a.m. to include details about the Internet Enabled Personal Electronic Devices Plan and a quote from a middle school student.

“This update had been on our radar for the past three years,” Principal Kent Messer said. “More and more middle schools and even high schools are eliminating cell phone use on campus after the school/campus becomes 1-to-1.”

“Overall it’s a positive impact,” parent Amy Bell said. “Not having access to their cell phones hopefully keeps them more focused on the work at hand, and definitely minimizes the distractions.”

Administration at the campus had updated the cell phone policy after reaching the 1-to-1 goal, and now the Student Code of Conduct only allows the usage of phones before and after school. Students are still allowed to have their phones on campus but are not permitted to use them during the day.

“It’s important to keep a pulse on the data surrounding the issue,” Bell said. “We need to support our kids and teach them the best practices for digital citizenship.”

To accommodate for this updated policy, parents or family members who wish to reach middle schoolers may communicate with them through the classroom phones and front office rather than texting their children.

“Many parents work and cannot wait until after school hours to communicate with their child about schedule changes or they may not be available at the time immediately after school,” parent Ryan Cole said. “It also inhibits our ability to communicate in case of an emergency or in the event that what our children need to communicate to us is some wrongdoing on the part of a teacher or school administrator. There’s also the issue of girls having issues that they shouldn’t have to communicate to anyone other than a parent.”

While cell phone use is permitted for students before and after school, earbuds in class and phones during the school day including passing periods are prohibited. Phones belong in lockers or backpacks during school, according to the Internet Enabled Personal Electronic Devices Plan in the Student Code of Conduct.

“I personally do not like the new cell phone policy because it restricts my communication to others and it reduces my entertainment during free time,” eighth grader Johan Vuong said.

Administration at the middle school will continue to observe behavior and interactions of the students and make changes to the policy as they see fit. Teachers and other staff members continue to exhibit correct digital citizenship even while students do not have access to their electronics.

“I am hoping more students are connecting in real life at lunch time and that those who find that challenging are finding new friends,” Bell said.