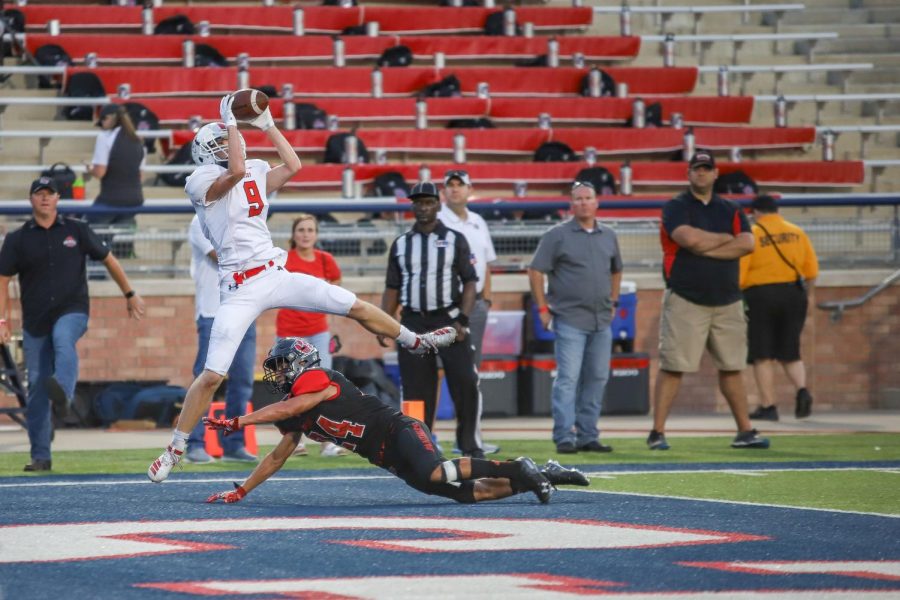 Junior Reid Westervelt elevates above Colleyville Heritage corner back Michael Neves (24) securing the ball for the Leopards first touchdown of the season.

After dropping a back-and-forth defensive showdown in its season opener, the football team (0-1) will look to bounce back and defend its home turf in tonight’s showdown against the Sulphur Springs Wildcats (0-1) at 7:30 p.m.

“We are definitely going to feed off the excitement of the first home game,” assistant coach Tyler Wicke said. “Sulphur Springs is going to be physical and tough. They struggled a little bit in week one, but we are expecting them to be a lot better in week two.”

While offense was at a premium for the Leopards in their 13-10 loss to Colleyville Heritage, the opposing Wildcats found themselves on the wrong end of a 53-17 final against Wakeland in week one. Sulphur Springs struggled to find a consistent passing game, as junior quarterback Kaden Wallace managed to complete just 41 percent (11/27) of his passes.

“They like to pound the football with their running backs and take shots down the field,” McDermott said. “Overall, we need to stop the run, cause turnovers and get pressure on their quarterback.”

While the Leopard defense will be feeding off their strong performance in week one, the offense will look to have a bounce back effort against the Sulphur Springs defense. Last week, junior quarterback Ralph Rucker was a mobile threat, as his 120 rushing yards paced the team. Junior receiver Reid Westervelt (one touchdown) was on the receiving end of 56 of the 68 total passing yards the Leopards had all game.

“We just need to establish the run game early,” senior offensive tackle Sean Sumners said. “If we can just get in a rhythm, it will be a scary night for the opposition.”

Sulphur Springs and Lovejoy are familiar with one another, as the Leopards defeated the Wildcats in the 2017 bi-district championship. Last year’s anticipated rematch between the two teams was cancelled due to inclement weather.

After tonight’s matchup, the Leopards will open up district play next Friday at home against Frisco Memorial.