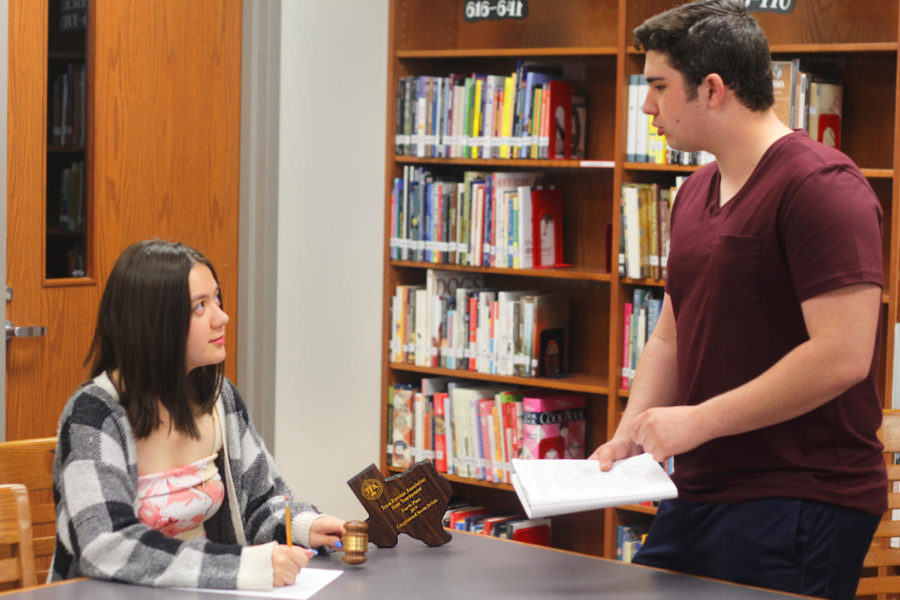 “How should Shark Finning end?”

“Should a bill be passed to cease all arm sales?”

“Should single-use plastic bags be banned in grocery stores to reduce environmental harm?”

These are some of the topics debated this year by the three members of the Congressional Debate team. Senior Samantha Carter, sophomore Chase Stevens and freshman Chisom Okorafor make up the team, with Carter as the captain.

As the only three members of this form of debate, they’ve participated in many tournaments. In Congressional Debate, students debate over topics similar to the ones being debated in Washington today.

“It takes what Congress literally does,” Stevens said. “You have all these different things that people can represent. Certain areas come up and say why we should pass or negate this piece of legislation. It is probably the most realistic, educational, and beneficiary form of debate.”

Ranging from passing legislation to finding solutions to economic problems, Stevens, alongside the rest of the team, debate over topics that relate to the government today.

Just like in a sport, the whole debate team practices by reading and researching the topics given beforehand. Carter has participated in many events and starts each topic the same way.

“Research is pretty much where you start,” Carter said. “You need statistics to back up your argument, you need to know the effects of what passing or not passing this bill would have, and then you write out some points if you need to.”

Starting in the Lincoln-Douglas competitions, Stevens and Carter have been involved in debate beginning as freshmen. Carter has experienced all types of speech and debate competition, ranging from poetry to acting events.

“Everyone started in [Lincoln-Douglas],” Carter said. “Then we all had to do extemp and original oratory, so that’s what I started in and then immediately after that I transitioned more into the acting events.”

This year, the Congressional Debate team was able to achieve many awards. Carter has twice qualified for nationals and will compete at the end of June. Stevens competed for Senate this year at the state level for the Texas Forensics Association.

“Chase finished in fourth place at the TFA State Tournament,” Cosio said. “This is especially impressive when you take into account that this tournament includes all public and private schools in Texas.”

With the end goal of a future in politics in mind, Stevens has prepared many arguments that relate to the ones he hopes to argue in the future. Stevens plans to get involved in government and hopes to one day serve as a member of the Congress himself.

“I am really hoping that one day I can volunteer or work as a staff or aid for the Senate,” Stevens said.

Carter said she believes that “being able to speak to people is something that is essential to any career.’’ Although she does not want to pursue a career in politics, her involvement in debate will ultimately help her communicate with others.

“You are going to need to have enough drive to seek out opportunities,” Carter said. “You are going to have to be able to make a good first impression by speaking, so no matter what major go into, I think debate will help everybody.”