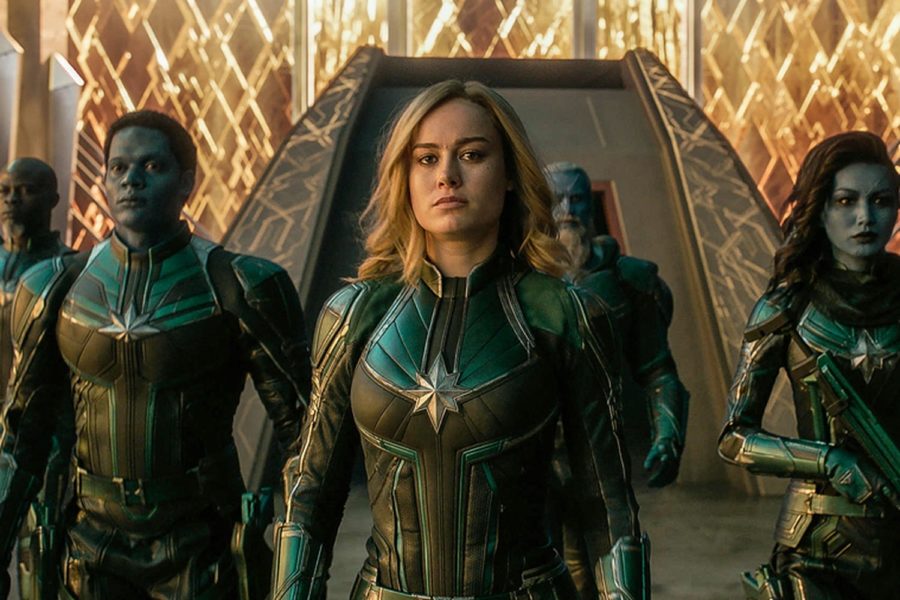 "The story at first seems to be filled with numerous superhero clichés and science fiction movie tropes but has a very interesting plot twist that makes up for the overused storyline."

“Captain Marvel” is the first female-led superhero film in the Marvel Cinematic Universe, but manages to feel more like a rushed DC film than a well-crafted Marvel blockbuster.

The film essentially revolves around a pilot called Vers/Captain Marvel (Brie Larson) who may or may not be from Earth, or the planet Hala–home of the warmongering alien race, the Kree. Throughout the film, Vers struggles to discover her true identity while helping the Kree fight the mysterious shapeshifting Skrulls. She eventually lands on Earth and learns the truth about of her origin. The story at first seems to be filled with numerous superhero clichés and science fiction movie tropes but has a very interesting plot twist that makes up for the overused storyline.

As for characters, Captain Marvel herself is the least interesting character in the film. The Skrull leader, Talos (Ben Mendelsohn), unexpectedly is quite charismatic and comedic at times. Nick Fury (Samuel L. Jackson) is given more to do in this film than most of the other MCU films and has some of the best sequences in the movie. However, Captain Marvel spends the entire film with the same vacant expression on her face. However, these flaws in the Captain Marvel character aren’t Larson’s fault.

The film is written in such a way that Captain Marvel must be an emotionally distant warrior who almost lacks a sense of morality. It makes sense that she must be this way in regards to the story, but the traits don’t make Captain Marvel a likeable protagonist. She doesn’t seem to have a defined personality in this film.

In some scenes, she jokes with Nick Fury, while other times she is walking around in California angry and determined to defeat the Skrulls. Even Captain Marvel’s Kree mentor Yon-Rogg (Jude Law) is given a defined identity as the “rough and tough” commander in charge of Starforce. The fact that the alien characters feel more genuine than Captain Marvel herself is very ironic.

Although mostly focused on aliens and spaceships, the sci-fi sequences in the film don’t stand out very much except for one scene. The sequence in which Talos searches through the memories of Vers like a YouTube video is very inventive and unexpected. As for the designs of spaceships, extraterrestrial homeworlds, and alien makeup, nothing really seems to stand out unlike the “Guardians of the Galaxy” films. In these films, each alien has a unique design and lives a in very weathered world where things seem very practical yet foreign. In “Captain Marvel,” most of the aliens are either painted blue or look like lizard-Yoda hybrids. The design of the alien society (specifically the planet Hala) even look overly animated like scenes from the “Star Wars” prequels.

Other than Captain Marvel’s character and some of the alien designs, the film is still quite enjoyable. With many comedic moments as most of the Marvel films do, “Captain Marvel” allows for many exciting, innovative sequences to occur. Overall, it is definitely a lower tier Marvel film in league with “Iron Man 2,” “Ant-Man” and “Thor.” The biggest flaw about this film is that it is the 21 film in the Marvel universe, but it doesn’t do anything new and feels like one of the first seven movies in the franchise.

Perhaps it would’ve been slightly better if it wasn’t as rushed as it was in order to fill general audiences in on who Captain Marvel was for when she appears in “Avengers: Endgame.” That being said, behind “Wonder Woman,” “Captain Marvel” is the second best female-led superhero film. But at this moment, there have only been two good ones.