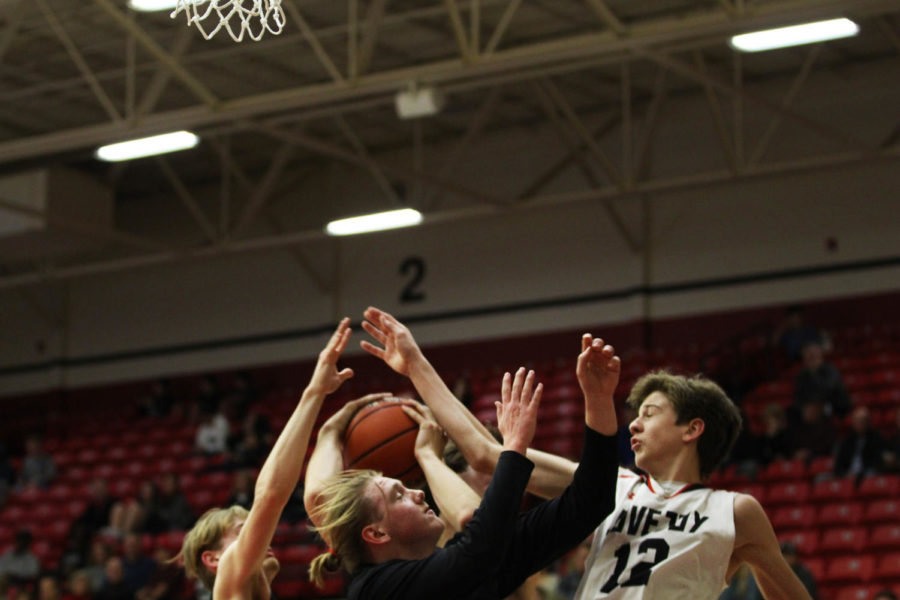 Junior Jared Langs goes up for a rebound.

With a rematch versus McKinney North (22-5, 6-0) looming in the near distance, the boys basketball team (21-6, 5-1 in district) must first get through the third-seeded Princeton Panthers (14-6, 3-2) in order to give itself a chance to compete with North for the district title next Tuesday. The Leopards, who are 1-0 versus the Panthers, will host Princeton (48-44 win) tonight at 7:30 p.m.

“Our big point of emphasis is going to be stopping their guards,” head coach Kyle Herrema said. “They try to run a lot of isolation plays to get different matchups, but we’re going to try to come up with a different game plan to try to counter that. I think we did some really good things last time, but we just had a hard time scoring. I think we’ll play a lot better at home tomorrow night.”

“I think we’re playing well right now,” Herrema said. “Mentally, I think the guys are ready for Princeton and McKinney North. We’re a very top-heavy district. Us, North, and Princeton have kind of pulled away from the other three teams. It’s our job to make sure we’re prepared for every game, but I think that they know what’s at stake for these next two games and so they’re going to be ready to go.”

Herrema is confident in the adjustments that will be made in order to better defend the Mustangs big men and attack their defensive zone.

“[North] did a couple of things that we’ve never seen from them before, but I think we’re going to be better prepared this time,” Herrema said. “It’s always fun being a coach because there’s a lot of different things the opposing coach could do. It’s kind of a guessing game on how they’re going to play you. [North’s head coach] kind of guessed right the first time, so it’s our job to counteract it and do better in the [game on Tuesday].”

In the event that the Leopards hand the Mustangs their first loss in district on Tuesday and tie them for first, one of two scenarios will play out. Either both teams will agree to be co-district champions and flip a coin to decide playoff seeding, or the teams will play an extra game to decide who will finish first in the district and who will finish second.

“A lot of the time it depends on who the third and fourth seeds are from the Frisco district,” Herrema said. “There are ten teams in that district, so it’s a close race. If the third and fourth place teams are pretty equal, you may just say ‘hey we’ll just flip the coin.’ But if there’s a huge advantage in playing one team over the other, then you would probably want to play it out.”

Senior Kyle Olson said he feels that the team is playing some of its best basketball at this point in the season.

“I feel like we’ve settled into our roles completely now,” Olson said. “Going into playoffs, you want to be playing your best. But as of now, we’re trying to win district and [McKinney North] is in the way of that.”