Junior Arianne Ohman carries life from China to the U.S 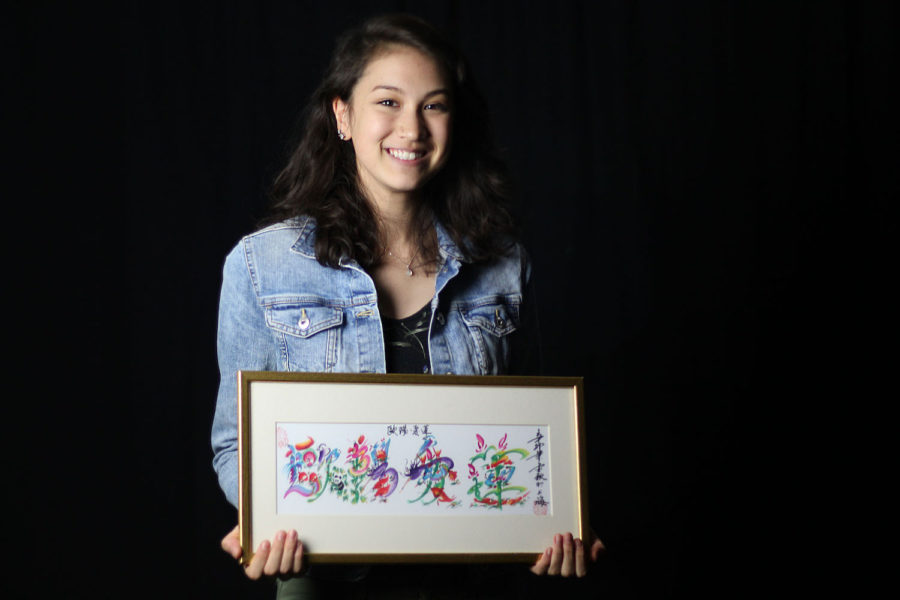 Arianne Ohman poses with a painting of her name in chinese.

Over eight thousand miles away from the place she once called home, junior Arianne Ohman finds familiarity and compassion one year into moving to the United States. Although born and raised in Hong Kong, she grew up in a culturally American household.

“The biggest difference [between the U.S. and Hong Kong] was the student body,” Ohman said. “It was mostly composed of Chinese [and] Cantonese people.”

Even though Ohman’s family used to visit the U.S. every summer to see relatives, there was a reverse cultural shock when she actually moved to the states.

“Although American culture wasn’t foreign to me, just being immersed in it 24/7 was a big change,” Ohman said.
Even though some of her extracurricular activities remained constant after relocating to the states, Ohman started pursuing new pastimes.

“I manage an Etsy store, volunteer at the SPCA, take my dog on walks and keep in touch with my Hong Kong friends–things that I either couldn’t or didn’t need to do when I was in Hong Kong,” Ohman said.

Ohman started an International Justice Mission (IJM) chapter at the beginning of her second year at the school. IJM works to rescue slaves, work with police to throw slave owners in jail and ultimately put the slave trade out of business.

“Back at my old school, I was involved in many similar activities,” Ohman said. “However, because all those activities were based at my old school, I’m no longer a part of them. But here at LHS, I’ve joined clubs that are almost identical and let me pursue the same interests.”

While she resided overseas, Ohman lived close to Sham Shui Po, one of the poorest districts in Hong Kong.

“Growing up in Hong Kong, slavery was something I saw on an everyday basis,” Ohman said, “and it was something I could regularly volunteer to help and I did a lot of services.”

Ohman supported IJM by passing out food to the homeless and bringing groceries to migrant workers and people who were living in cage homes.

“I did a lot of volunteer-based services interacting with people who were either living in terrible poverty or involved in some forced labor,” Ohman said. “Of course, I wasn’t able to volunteer every single week but I tried to do it once or twice a month.”

Knowing that violent acts such as slavery were happening close to her home was devastating to Ohman, but she said as a result, it strengthened her want to do something to help the situation.

“I would see news of the trafficking, forced labor, and slavery that was going on and felt responsible to fight it,” Ohman said.

When her family moved to the U.S, Ohman still felt like she should be doing something to contribute to IJM. She was able to contact the organization and start a chapter at the school.  IJM became a way for her to connect her passions to her country.

“Modern slavery isn’t something that many people normally associate with big world issues at the moment,” Ohman said. “So our goal is to help people realize that it is still an issue in our world. And secondly, our goal is to raise money to support IJM.”

“[IJM is] an incredible organization and I am incredibly passionate about the work they are doing to end slavery within our lifetime,” Todd said. “So, I was both happy and eager to help support and raise awareness about their work when Arianne approached me. She does a great job of sharing her experience with the club during meetings.”

Todd said her responsibility as the sponsor is providing a venue for meetings and aiding in communication or correspondence with Ohman.

“[Arianne] is incredibly responsible and organized,” Todd said. “She schedules the meetings and works to prepare the presentations. I help mostly with logistics. It’s neat to get to see the club take shape and find their rhythm. I’m excited for what the future of the club grows into.”

Ohman said IJM gives a meaningful connection to her home country by helping to make efforts to change the slave trade. She said she felt, and still does feel, incredible compassion for those she volunteers to help.

“It’s an opportunity for me to just be able to tell them that someone cares for them and is thinking about them and wants their situation to improve,” Ohman said. “And that’s another thing I was hoping to bring to this school, that we can still as a school be able to make an impact somewhere else in the world.”