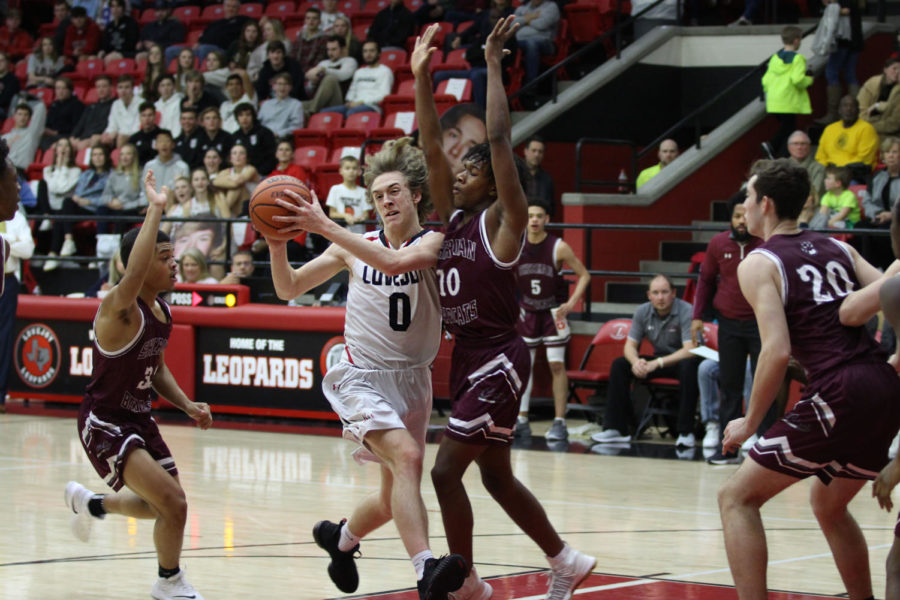 Junior guard Kolby Mcspadden is fouled by a Sherman player as he drives to the basket during last friday's game.

The only two undefeated basketball teams remaining in District 15-5A will meet tonight in a highly-anticipated matchup that will take place on the Leopards’ homecourt at 7:30 p.m. Both the Leopards (16-6, 2-0) and the McKinney North Bulldogs (18-5, 2-0) head into the game boasting a 2-0 district record, but only one will come out with its winning streak intact.

Head coach Kyle Herrema said he is expecting to see a competitive match.

“It is an important game for both [teams],” Heremma said. “I think that we’re probably two of the best teams in the district. I also think that we match up really well together. We both have size and some depth. It should be a really well-played game.”

The team had a strong defensive performance in Tuesday night’s game versus Princeton, winning 48-44. The Leopards were outscored in every quarter but the second, in which they dropped 20 points and held the Panthers to just six points.

“[Princeton] had two really good guards, who we did a good job at defending,” Herrema said. “But it was just one of those nights where our defense carried us. We were stagnant offensively.”

The team was led in scoring by senior Jonathan Lawrence with 18 points. Lawrence shot 5 for 7 from the field and 8 for 12 at the stripe.

“A good thing about our team is that we have balanced scoring,” Herrema said. “We have five to six guys that are all averaging roughly the same amount of points. [In Tuesday night’s game,] Johnny did a great job of moving without the basketball and we found him with some great passes. It was his night to stand up and he played great.”

The team has spent the practices leading up to tonight’s game prepping for North’s 6-7 center senior Brandon Frazier. Frazier is currently shopping offers to play football for nine schools including Nebraska, Arkansas, and Oklahoma State.

“We’re just going to have to be more physical than they are,” Herrema said.  “We’re going to have to put a body on him. He’s like a man mountain. What makes it difficult is the good shooters that surround him. You can’t just automatically collapse without getting hurt in other places. We have to be real smart about when we collapse on him and when we have to stay connected to the shooters.”

Senior Kyle Olson said although it is still early in the season, he believes this game has playoff implications.

“We’re definitely putting a lot of emphasis on winning this game,” Olson said. “Whoever wins this game and the next match up with [North] will probably be the winner of district. It should be a good game.”