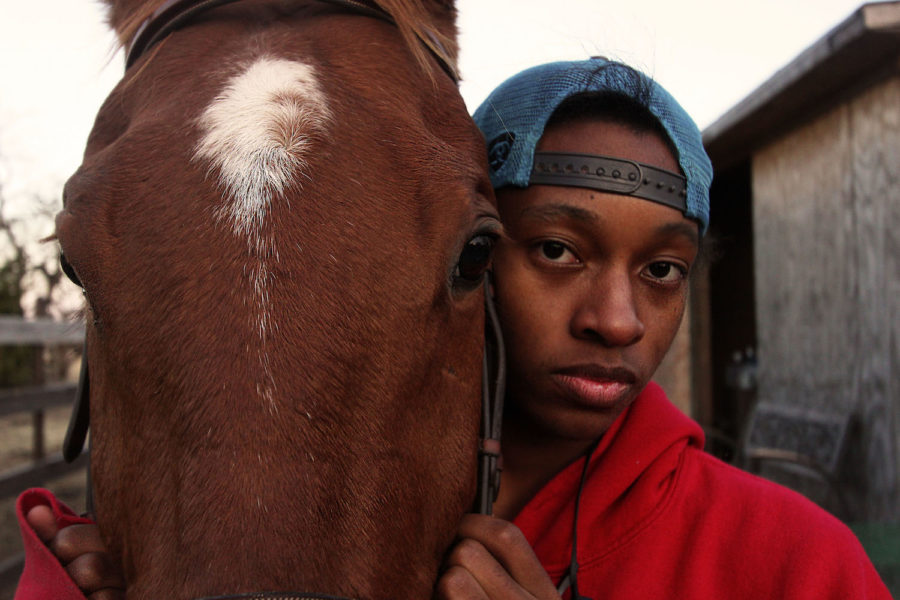 Junior Ty Hall stands with his horse, King, outside the pasture.

The thoroughbred trotted lightly through the grass despite his tall and intimidating demeanor, red dirt flicking up from each step. The sun cast a golden glow onto his coat, making the fur shine like melted chocolate.

A white blanket lay draped over the horse’s back, a dark leather saddle on top where junior Ty Hall sat stroking the horse’s neck and encouraging the eagerness in the horse’s step.

They reached the center of the circle, grass worn from the path around the fence due to  hours of training. This has been Hall’s daily routine for years, and he doesn’t plan on stopping any time soon.

Hall spends the majority of each day training, riding and taking care of horses from early in the morning to late into the night. What started as a hobby has developed into a passion and a career for Hall.

“I love it because it’s different,” Hall said. “I make my own schedule. I’m my own boss. It’s me being free to be me and it’s relaxing.”

Hall first rode a horse when he was around the age of 6, describing his experience as overwhelming and scary. However, he kept riding, determined to get over his fear.

“I had excitement, fear, anxiety, [but] I wanted to keep on doing it because it was actually really fun once I got over my initial fear,” Hall said.

Hall started working with his neighbor’s horses, learning how to take care of them, gain their trust, and understand the basics of training. In 2015, Hall’s work branched out from his neighborhood to be an assistant trainer with Michaele Starret, the owner of A.P. Training Center located in Whitesboro, Texas. Starret is ranked third in the nation as miniature horse trainer and is the only woman in the top 10. In the summer of 2017, Hall worked as an apprentice to Starret by helping feed, clean and train horses.

Hall has experience training several different types of horses, from miniature ponies to show horses. He most frequent, however, are jumpers.

“To train a jumper, I go through the typical process of lunging [the horse] first to see how their movement is [and] putting a saddle on them,” Hall said. “I’ll be on the ground lunging them around and they’ll go over a jump with no one on their back. I just want to see how they’re looking and how they’re going to react to the jump before I put myself on their [back]. Once I see they’re going to be good and I see what I need to work on, what could be a problem, I’ll get on and conquer that problem on their back and on the ground.”

Hall has also trained people for riding horses, because of his knowledge and experience. From the beginning of July o the end of August, Hall spent time twice a week training freshman Josh Terwilliger in horse jumping.

“He’s a really good trainer, but also a good friend,” Terwilliger said. “He’s not there to put you down. He’s always there to help you with anything.”

In addition to training riders and other horses, Hall also works with his own. Hall is the proud owner of four horses: a thoroughbred named King, a quarter horse named Prince, a quarter Arab cross named Blue, and a miniature pony named JJ.

“He loves [his horses], that’s his life,”Terwilliger said. “He takes care of them like they’re his kids. Every time we are talking, he is talking about his horses. It’s awesome.”

Despite the passion Hall has for training, it takes lots of time and patience, absorbing most of his after school hours and leaving little for homework. Hall explains how the process takes hard work and the ability to manage a schedule wisely.

“It’s very time consuming just because you know what you have to do and sometimes you can’t get the result you want,” Hall said. “Either you are having an off-day or your horse is having an off-day, so you have to try to push through that and if you can’t, you have to start over again the next day. It’s a challenge, especially with trying to manage homework.”

Despite the struggle of managing school and training, Hall said it’s worth it to be able to work and learn with horses each day.