Seniors to embark on the World Race following graduation 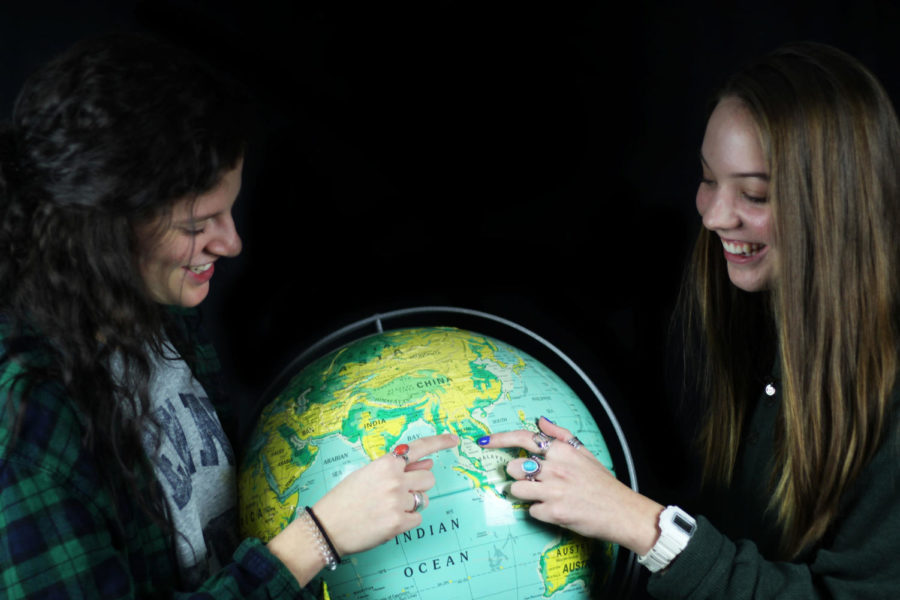 Seniors Mallory Sailer and Alexis Simmons will travel through Thailand, Guatemala and Ethiopia during their gap year.

Seniors Mallory Sailer and Alexis Simmons have set their college careers back a year in order to participate in the World Race, spending several months abroad on a mission trip.

Carrying only what fits in their backpacks, Sailer and Simmons will be trekking through Thailand, Guatemala and Ethiopia to help victims of sex trafficking, spread the word of God and experience different cultures around the world.

Although they both chose the same route and were selected for the same group, Sailer and Simmons discovered World Race on their own.

“There are six different routes, and we both somehow applied for the same one, so we have the same squad,” Simmons said. “It’s cool because Mallory and I are not that close–we’re in the same grade, [but we] never really had a class together and so it’s really cool we get to become friends on the race.”

Sailer found her calling to the World Race when she was researching different mission trips online. She was inspired by how many people the World Race has helped through the years and decided to apply.

“The World Race was one of the first [mission trips] to pop up [online], because it’s been around for 30 years and they’ve sent thousands of people,” Sailer said. “It was everything I wanted to do, and it was really well established.”

Although she has never participated in a mission trip like this before, Sailer said she felt a calling to take this opportunity. For the World Race, “each day looks different” she said, which makes it more exciting for her.

Simmons discovered the World Race from a counselor at a Christian summer camp. She said she felt a calling to attend after hearing details of the trip, so she changed her college plans to join the trip.

“I really wanted to go to college, I really wanted to follow the typical plan all the way up until the end of last year,” Simmons said. “Then that all shifted when I decided to go on the World Race. So I think it really shocked my parents and my family, because I had never gone on a mission trip before.”

Simmons is also graduating a semester early in order to move to Colorado and become a special needs ski instructor. She has skied for years, and when her family made the decision to move, she decided to use her skill to help others.

“I’ve always been a talented skier and I wanted to do something fun while I was there for five months,” Simmons said. “So I applied to be a volunteer special needs ski instructor and I got the job, so I’ll be paid.”

Simmons and her family will move Dec. 19, and she will take one final test before beginning training to become an instructor. She will be working with Telluride Adaptive Sports  until Sept. 4 when she leaves for World Race, where she will be abroad until May 22.

“2019 is going to be very interesting,” Simmons said. “I won’t be in one place longer than five months.”

In preparation for after World Race, Sailer and Simmons have already sent out their college applications with their fellow classmates. The only difference is they will be waiting to attend their school until returning from the trip. Sailer said hopefully the trip will even give her an understanding of what path she wants to take in college.

“I felt a calling on my heart to the mission field since probably my freshman year of high school,” Sailer said. “I just felt God was calling me to be an international missionary. I didn’t really know what that looked like, and I don’t know if that’s what I want to do as a full-time career, so I was like ‘I could take a gap year and get that experience’ because I know it would change my life completely. Then if I come back and I’m like ‘OK this is what I want to do,’ then I’ll be an international missionary.”

Their route will be taking them through Guatemala, Thailand and Ethiopia, spending three months in each country to help with certain issues in the name of their faith. As they participate in the mission trip, they are encouraged to post updates on a blog. Simmons and Sailer both have a place to share their experiences, stories, and photos. They also have a link for people to give donations towards the mission.

Because of the frequent moving, they are only allowed to bring what they can pack in a hiking backpack. For the span of nine months, they will be living through one week’s worth of clothes, a sleeping bag, and a tent. Basic commodities that most people wouldn’t think of traveling without, like toothpaste or toothbrushes, will be left behind.

“We won’t be bringing toothbrushes or toothpaste because you can get those in third world countries, and they’re heavy so you don’t want to carry them in your backpack,” Simmons said. “We live in host homes so hopefully they’ll have washing machines [for our clothes].”

“There will be times when I won’t have much contact with her,” Mallory’s mother Stephanie Sailer said. “I won’t know where she is all the time, and I won’t be able to physically see her [which] will be difficult.”

Despite the distance from loved ones, Simmons and Sailer are excited for World Race and helping others through missionary. Sailer said that she expects to learn new things about different cultures and have a new perspective on life when she returns.

“I know I’m going to learn so much about other cultures, other people,” Sailer said. “I’m going to see poverty, disease and brokenness firsthand, which you don’t really see here. So I know my eyes are going to open to a whole new world.”