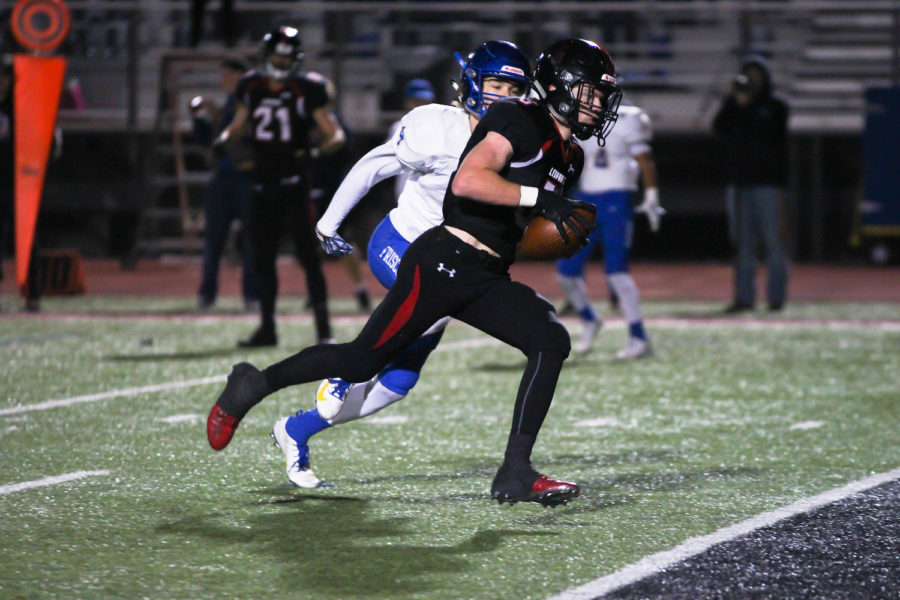 Senior Jacob Terwilliger cruises to the end zone for a receiving touchdown on senior night. Terwilliger paces the Leopard receiving corps with 991 yards and 14 touchdowns.

After taking care of business in the bi-district championship, the football team (8-2) will challenge the Aledo Bearcats (11-0, consensus #1 in 5A District II) on Friday at 1 p.m. at Pennington Field in Bedford. The 5A District II area championship will be televised live on KTXA Channel 21.

“We all have to believe we will go out and beat them,” Collins said. “Yes, they are good, but so are we. They are 16, 17, and 18-year-old high school football players just like we are. Rankings and past history mean nothing. It’s all in our belief.”

“They have some good skill players that make them go, but if we shut down their scheme, we will be alright,” Beidleman said. “We just need to stop the run.”

On the other hand, Aledo scored on its first five possessions last week en route to a 48-13 victory over Seagoville. In the last three years, the Bearcats have only lost one game, which occurred in last year’s 20-19 loss to College Station in the state championship.

The winner of Friday’s matchup will advance to the regional championship and play the winner of South Oak Cliff versus Frisco.