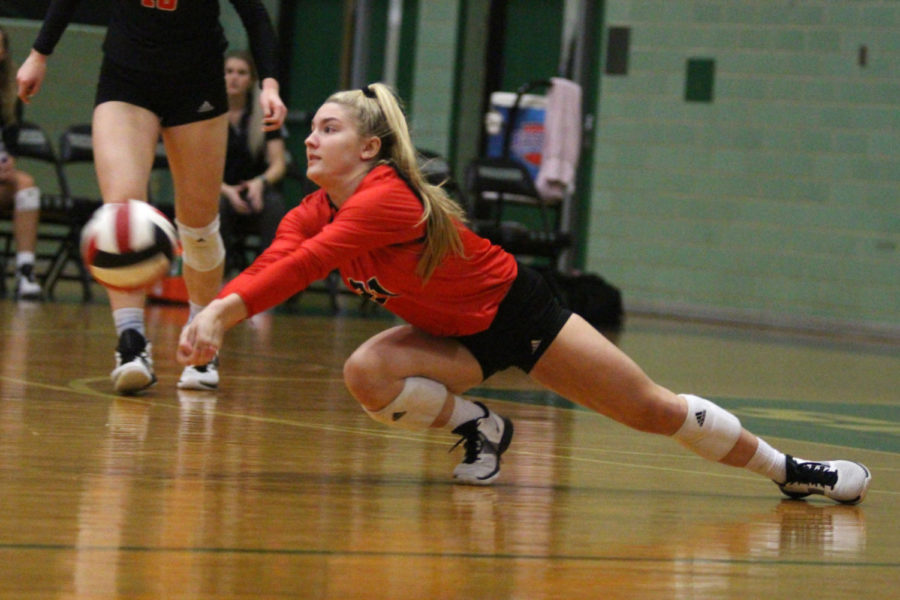 Senior Michelle Foster dives to defend a hit from an outside hitter.

Embarking on its eighth state tournament appearance since 2008, the volleyball team (44-6, 10-0 in district) will face long-time playoff rival Dripping Springs (33-15, 14-0) tomorrow at 1 p.m at the Curtis Culwell Center as it looks to secure its spot in the state finals.

“In 2014, we played [Dripping Springs] in the finals and beat them,” head coach Jason Nicholson said. “Our crowd, our band, and our atmosphere definitely helped push us to a victory that day. I’m hoping we get a great turn out from our student body because that will help us out a lot.”

This will be the third meeting between the two schools in the state tournament. The first match was in 2014, when the Leopards swept the Tigers in the finals. However, the following year, and the last time the Leopards were in the state finals, Dripping Springs handed them the loss.

“Most of the girls on this team were sitting in the stands watching the first year when we beat [Dripping Springs],” Nicholson said. “A couple of them were pulled up that second year and actually went through the process with us. I think we do feel like due to the history, there is a reason for us to come back and it’s our turn to reclaim the win after they beat us in 2015. Getting ourselves to Saturday is the important piece.”

After wins versus Red Oak (27-16, 11-1) and Frisco Wakeland (37-6, 15-3) last weekend, the team has used this week to physically and mentally prepare for this highly anticipated matchup.

“It’s been a long season,” Nicholson said. “We’re 50 matches in. The key is just keeping us healthy and keeping our heads on straight. We’re going through our usual little routine and just kind of doing what we do. It’s not like the girls are on cloud nine or didn’t expect to be here or think that we’ve accomplished anything at this point. We know we have two more [games] to go, and that’s our goal.”

Senior Madison Waters said that the program’s extensive history with Dripping Springs doesn’t phase her in the slightest.

“They’re a brand new team just like we are,” Waters said. “So we are coming in fresh and approaching them like any other team.”