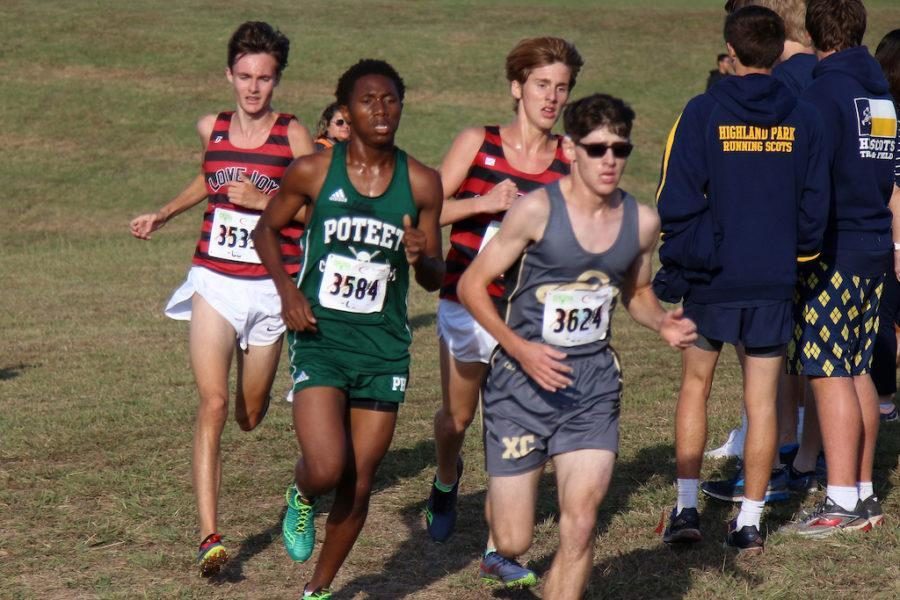 Senior Brett Pederson and junior Brady Laboret push each other as a pack.

After winning back-to-back state championships in 2016 and 2017, the boys cross country team is headed back with hopes of cashing in on its third consecutive state title this Saturday in Round Rock.

After coming off a victory at the regional meet, the boys team has not lost a meet all season, easily running away with first every time. The closest a team came to defeating the Leopards was in the regional meet with Frisco Wakeland, who still finished 92 points behind the Leopards.

For junior Whitson Bedell, winning his third state championship would show just how dominant his program has been since he became a part of it his freshman year.

“Winning our third championship in a row would mean a lot to me and our team,” Bedell said. “Taking home first isn’t all that matters. It is about seeing how our hard work and everything we put into our training pays off.”

The main teams the Leopards will be focused on are Kaufman and Midlothian. Kaufman’s top runner, Christian Rivera, holds the seventh best 5K time in the 5A ranks this season at 15:12. Midlothian’s Tanner Henderson recorded the 15th best time in the state this season with a 15:32, with his teammate Jacob McElhanon recording the 20th best time with a 15:37.

Junior Will Muirhead, who has been the Leopard’s top runner with a season best of 15:15 (eighth in 5A), has been running against Aledo’s Graydon Morris, who took first place in last year’s state meet with a time of 14:58, since his freshman year.

“Graydon is a talented runner, and he has been fun to compete with over the years and, he usually ends up finishing very high in meets,” Muirhead said. “I am excited to compete against him at state this weekend.”

The Leopards girls team also has two runners who advanced out of the regional meet. Senior Carson Hockersmith and sophomore Amelia Carothers will be traveling along with the boys team to compete this weekend.

“It will be important for both Amelia and me to get out fast and hang with the top group in the race,” Hockersmith said.

Highland Park has been known for having a prolific girls cross country team for the past decade, and Frisco Wakeland took first in the regional meet.

“We will need to watch out for Wakeland and some of the top girls from Highland Park, so if we can come out tough and hang in with both of them, we will be set up to have a good day,” Hockersmith said.